Google has released the latest Android mobile operating system (OS) usage information, revealing which version of the platform is used most on user’s smartphones and tablets. These figures were compiled from data Google collected during a two week period that ended on 1 October 2012.

Thanks to Android Ice Cream Sandwich (ICS, Android 4.0) software updates becoming available for more mobile devices, most recently Sony’s Xperia go, U and sola smartphones, this version of the platform is now used on 23.7% of all Android-running devices. This is up from 20.9% for September and a usage tally of 15.9% noted during August, meaning an average rise of almost 4% over the last couple of months.

Barely registering a change is Eclair (Android 2.1) which is utilised by 3.4% of all Android users, compared to 3.7% during September. Eclairs’ equally stale Android compatriots, Donut (Android 1.6) and Cupcake (Android 1.5), obtained usage shares of 0.4% and 0.1% respectively.

With the release of the first Jelly Bean operating tablet, Google’s Nexus 7, and more ICS tablet updates being released, Honeycomb (Android 3.1-3.2) now finds itself a slightly less sweet tablet OS prospect with its usage share of 1.9%. 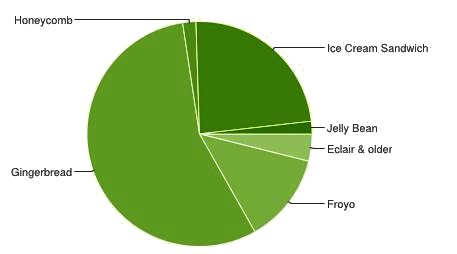 Pie chart: Google's Android Developers site
Check out our Android Apps of the month for October 2012 here, for a look at some of the best applications Google’s Play store has to offer.
TAGS:
GoogleAndroidmobile OSAndroid ICSAndroid Jelly Beanmobile platform
USER COMMENTS