Web search giant Google has released the latest Android mobile operating system (OS) usage information, revealing which version is utilised most on user’s smartphones and tablets. These figures were compiled from data Google collected during a two week period that ended on 1 August 2012.

Despite the fact that Ice Cream Sandwich (ICS, Android 4.0-4.0.4) was unveiled in October last year and has been available on the market for some time now, Gingerbread (Android 2.3 - 2.3.7) remains master of Android’s smartphone realm. This smartphone platform obtained the lion’s share (60.6%) of the Android usage pie, but this is a drop of almost 4% down compared to July’s figure (64%). 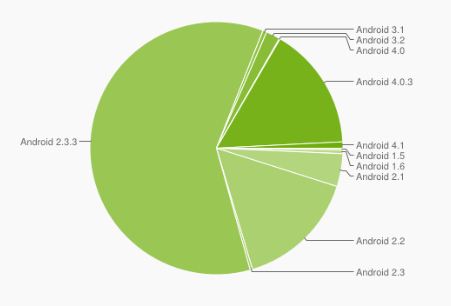 Pie chart: Google's Android Developers site
In related news, Google recently launched its newest search feature dubbed Handwrite, which is in beta form but accessible on both Android and iOS-running devices. This feature enables users to write the word or sentence they are searching for using their natural handwriting on Google’s homepage.
TAGS:
GoogleAndroidmobile OStech facts and figuresmobile platformAndroid ICS
USER COMMENTS