Internet search giant Google has released the latest Android mobile operating system (OS) usage information, revealing which version of the platform is employed most on user’s smartphones and tablets. These figures were compiled from data Google collected during a two week period that ended on 4 September 2012.

Even though it has been replaced by Jelly Bean (Android 4.1) as the latest and greatest version of Android, Ice Cream Sandwich (Android 4.0, ICS) is still a long way off of being master of the Android realm. ICS is now utilised on 20.9% of mobile devices compared to 15.9% during August. Jelly Bean has upped its usage tally from a minority 0.8% stake last month to a still unimpressive 1.2% this month. 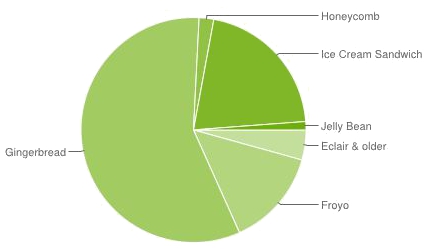 Check out our Android Apps of the month for September 2012 here, for a look at some of the best applications Google’s Play Store has to offer.