Google Maps Navigation (beta) now includes GPS turn-by-turn navigation, which is available for public transit directions in over 400 cities around the globe (including Pretoria, Johannesburg and Cape Town - Transit layer only) via Transit Navigation. Voice-guided navigation is not available to South African users yet.

Transit Navigation employs GPS to determine a user’s current location along their route and then alerts them when it’s time to take an off-ramp or make a turn. After a user begins their trip using Transit Navigation, they will be able to open another application or even put their smartphone away. This is due to the fact that Google Maps will still display an alert in their notification bar and vibrate the phone when their stop or turn is coming up.

Besides this new Transit Navigation feature, the latest version of Google Maps for Android also boasts enhanced directional services. The company has streamlined the way in which a user accesses directions from within a Place page. Previously, clicking directions in a Place page would result in the user being taken to the following options, “Driving Navigation,” “Walking Navigation” and “Directions.” With the release of version 5.7, a user will be taken straight to the map and see the new directions box (pictured below). 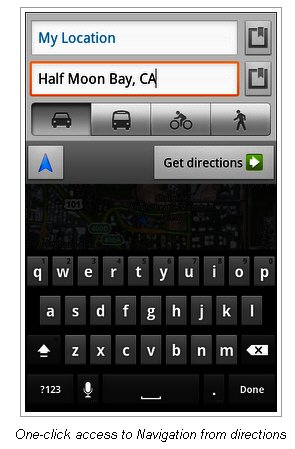 Users will now see a pin for a Google Places listing, a star for a starred Place or location, a clock for a previously used search term, a person icon for their contacts and a magnifying glass for “anything else.”

The second change is that any location that a user got directions to or called directly from its Places page, will now be included as a suggestion for a relevant search.

Last but not least is a new photo viewer for the Place pages, which has been included to enable users to browse photos view photos of places that they want to visit.

To be able to download and install this latest update for Google Maps for Android, a user must utilise a mobile device operating on Android 2.1 (Éclair) or better device.

The search giant has been busy of late, launching its Google+ social network, new ‘WDYL’ search portal, as well as rolling out Google Engage recently in South Africa.