The latest research from market research company International Data Corporation (IDC) has revealed that global smartphone shipments during 2013 are expected to outperform feature phone shipments for the first time on an annual basis.

According to IDC’s worldwide quarterly mobile phone tracker service, vendors will ship 918.6 million smartphones this year, which is forecasted to amount to 50.1% of the total mobile phone shipments worldwide.

A trio of factors are driving smartphone growth worldwide, namely the falling prices of smartphones, the ever-increasing range of devices available across a wide price band, and the rollout of data-centric fourth-generation (4G, LTE) wireless networks.

By the end of 2017, IDC forecasts that 1.5 billion smartphones will have been shipped around the globe, which equates to just more than two-thirds of the total mobile phone estimated for that year, also as a result of these three primary factors.

A shifting balance in smartphone demand

Up until very recently, much of the world’s smartphone shipments were a direct result of strong demand in mature economies such as the US. IDC said that the balance of smartphone demand is gradually shifting to emerging markets, where the smartphone user base is still relatively small and economic prospects are considerably higher.

Shipments to China, Brazil, and India is expected to encompass a growing percentage of smartphone volumes within each forecasted year, as demand increases in these large, populous nations.

The market research company added that China, which passed the US last year as the global leader in smartphone shipments, is leading this balance shift in demand. 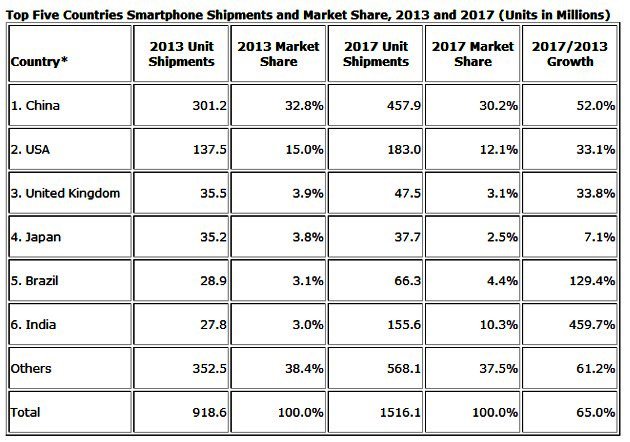 IDC asserts that China will easily remain the world’s largest market for smartphones, especially when it comes to affordable, lower end models that operate on Google’s Android mobile operating system (OS) and to a lesser degree Apple’s iOS.

Although shipment volumes to China will stay high, market growth will slow towards the end of the forecast period. Due to an expected fall in the prices of smartphones as a result of increased competition within the market, the country’s share of the global smartphone market will be diluted somewhat as more smartphones are shipped to other high growth emerging markets such as India and Brazil.

“While we don’t expect China’s smartphone growth to maintain the pace of a runaway train as it has over the last two years, there continue to be big drivers to keep the market growing as it leads the way to ever-lower smartphone prices and the country’s transition to 4G networks is only just beginning,” said Melissa Chau, senior research manager at IDC Asia/Pacific.

When it comes to the US market, IDC anticipates a slowing down in the smartphone adoption rate, since the majority of all mobile phone users Stateside, now own a smartphone. What little market growth there will be, will come as a result of the constantly shifting mobile platform landscape, as new operating systems such as BlackBerry 10 and Microsoft’s Windows Phone 8 battle to snatch some market share away from the dominant players in Android and iOS.

IDC stated that India’s year-on-year smartphone shipment growth will be the highest among the top countries and by some margin as well. The vast majority of the Subcontinent’s wireless subscriber base currently utilise feature phones, leaving a lot of room for market growth.

The analytics company added that the Indian smartphone market will grow due to many factors. These include greater availability of low-cost mobile devices, as well as additional sales emphasis by the main smartphone OEMs (original equipment manufacturers) on less populous parts of India.

Additionally, 3G network coverage will continue to expand whilst LTE (4G) networks are expected to stimulate smartphone growth as of 2015 and beyond.

“Even as China starts to mature, there remains enormous untapped potential in other emerging markets like India, where we expect less than half of all phones shipped there to be smartphones by 2017, and yet it will weigh in as the world’s third largest market,” continued Chau.

Brazil and the UK

According to IDC, a number of factors, including tax breaks for mobile vendors that creates local jobs via mobile phone production, sit at the heart of Brazil’s smartphone market rise. Wireless service providers are offering greater subsidies to drive smartphone sales with an eye on higher data revenue streams in the near future, with the rollout of long-term evolution (LTE) networks in Brazil being key to the country’s smartphone market growth.

“Brazilians have yet to turn in their feature phones for smartphones on a wholesale basis,” explained Bruno Freitas, consumer devices research manager at IDC Brazil. “The smartphone tide is turning in Brazil though, as wireless service providers and the government have laid the groundwork for a strong smartphone foundation that mobile phone manufacturers can build upon.”

In the UK, smartphone market growth has slowed down considerably within recent quarters. This, as smartphone penetration has increased (meaning a lot more people already own a smartphone) and economic growth prospects remains minimal at best.