The latest data from market research firm Strategy Analytics (SA) has revealed that Apple became the number one mobile phone vendor for the first time ever Stateside, as the iPhone maker captured a record 34% market share during Q4 2012.

According to SA’s Wireless Device Strategies (WDS) service, mobile phone shipments increased by 4% annually to reach 52 million units in the US during Q4 2012. This is up from Q4 2011’s 50.2 million units, with the growth being driven by robust demand among consumers for 4G-enabled devices as well as 3G feature phones, according to the analytics company.

SA did note however, that the US mobile phone market contracted 16% for the first three quarters of 2012, as a result of economic uncertainty, coupled with tighter carrier upgrade policies. This led to an 11% drop in the mobile phone shipment total from 186.8 million units during 2011 to 166.9 million for last year.

Apple shipped 17.7 million mobile phones for a record 34% US market stake market in Q4 2012, marking a significant increase from 12.8 million units shipped and 25% share during Q4 2011. The Cupertino-based tech outfit’s success has been driven by its popular ecosystem of iPhones and the App Store that recently passed the 40 billion apps download milestone, generous carrier subsidies, as well as extensive marketing around the new iPhone 5 (review).

Cupertino’s Korean rival Samsung managed to ship 16.8 million mobile phones in the United States, providing it with a 32% market share during Q4 2012, according to SA. This was up five percentage points from 27% a year earlier, but it was not enough to hold off a surging Apple that replaced Samsung on the top spot. Samsung had been the number one mobile phone vendor in the US since 2008, and it will be aiming to reclaim top honours via its much rumored forthcoming Galaxy S4 smartphone. 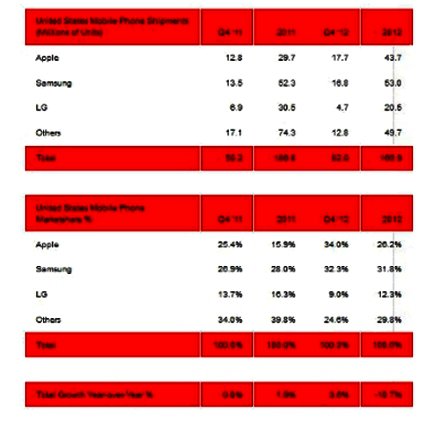 Rounding off the top 3 is Korean firm LG, which remains the third largest mobile player in the US market, courtesy of an estimated 4.7 million mobile phones shipped that is enough for a 9% share of the US market in Q4 2012. Both tallies are down however, from 6.9 million units and 14% market stake from a year ago.

SA asserts that LG struggled to compete with Apple and Samsung in the high-growth smartphone sub-category last year, and the manufacturer will look to boost sales within this division this year with new and improved models, including its Optimus G LTE.