At the high-end and midrange smartphone spectrum Nokia competes against the likes of the iPhone and Galaxy S3 with its Windows Phone-based smartphones. When it comes to the low end of the smartphone market however, Nokia uses its Asha feature phone range to woo buyers away from entry-level Android-running contenders.

The latest addition to the Asha series is the Finnish firm’s touch-friendly Asha 311 (promo video posted below). It packs a revamped Series 40 user interface and snappy 1 GHz single-core processor (make unspecified) to lure buyers away from competitors such as Samsung’s Galaxy Pocket smartphone.

The look and feel

On the design front, this chubby little feature phone measures 106 x 52 x 12.9 mm and weighs in at 95 g. Like most of Nokia’s other devices it sports an excellent build quality that makes it feel really solidly constructed and easier on the eyes compared to similarly priced (R1 500) smartphones such as LG’s Optimus L3 for instance.

We liked the two-tone (black and blue) colour of this mobile, with the all-plastic design stylishly contrasted by a chromed strip that houses the two physical buttons right underneath the touchscreen. These buttons (answer call and end call) provide a decent amount of responsiveness and are easy to press.

Nokia equipped the Asha 311 with a 3" touchscreen that sports a low 240 x 400 resolution, translating to a below-par 155 ppi pixel density. Unfortunately, the resolution is not the worst thing about the display, since it feels more like a resistive touchscreen than the capacitive display that it is and does not provide the most responsive user experience.

However it is protected by Corning Gorilla Glass, a common feature on smartphones but not on budget feature phones. Furthermore, the Asha’s ppi is at least better than that (125 ppi) on offer on the 3.2" (240 x 320) screen of the LG L3 and is also more much more effective in reducing glare when outdoors in direct sunlight.

The less-than-smooth touchscreen puts a slight damper on the enhancements Nokia have made to its Series 40 feature phone operating system (OS) running on this Asha device. Most of these have come courtesy of the dead-on-arrival MeeGo platform that handles the operating on Nokia’s N9.

From the lockscreen, the Asha 311 is unlocking by swiping to either side (left or right) in the lock screen. This MeeGo-inspired motion takes users to the main screen (app drawer) with rows of application shortcuts.

Users are able to swipe left to access the device’s second homescreen, the active standby screen. This screen features a shortcuts to your most used applications such as alarm and music player or favourite contacts.

When a user taps and holds one of the app icons within this menu they will enter an edit mode, which enables one to select the app shortcuts or frequently contacted people to add to this screen.

The third and final homescreen is the phone’s dialer, and this too can be customised. You can opt to replace the dialler with either the music player or FM radio if you listen to music or the radio more than you phone people.

In addition, it is easy to quickly get to handy settings (Bluetooth and Wi-Fi toggle on/off switches) and apps (message composer) via the Android-esque pull-down notifications bar.

Unfortunately, Series 40 does not boast multitasking capabilities so you have to close an application before opening a new one. This can be annoying on occasion, since one cannot quickly send an SMS whilst in the midst of a challenging Angry Birds level for instance.

A user choose from over 120 000 apps available within the Nokia Store, which matches the app tally on offer on Microsoft’s Windows Phone Store (formerly Windows Phone Marketplace). However it remains a far cry from Google Play’s number of 675 000 and the Apple App Store’s 700 000 apps. 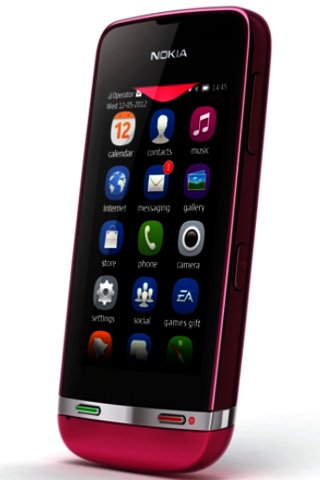 Internal storage for these apps as well as your multimedia content comes to a paltry 140 MB, but you can expand upon this via a microSD card slot that supports cards up to 32 GB in size. Luckily, a 2 GB card is also included in the retail box. A 1 110 mAh battery sees the Asha 311 lasting well past the one-day smartphone benchmark, and easily crossing the two day usage milestone before having to reach for the charger.

In terms of connectivity, the Asha 311 offers 3G HSDPA connectivity with download speeds of up to 14.4 Mbps and upload speeds of up to 5.76 Mbps, Wi-Fi 802.11 n, and Bluetooth v2.1.
Also onboard is a 3.15 MP camera that captures so-so stills and records VGA (640 x 480) videos at 25 fps, as well as a voucher to download a more-than-generous 40 EA games for free via the Nokia Store including Need for Speed: The Run, addictive puzzle game Bejeweled and The Sims 3 World Adventures.

Nokia’s Asha 311 sports some well thought out, swipe-loving, Series 40 OS enhancements plus decent specs for its recommended retail price of R1 500. In this price bracket it competes against the cheaper (R1 000) Android-running Samsung Galaxy Pocket and LG Optimus L3 (R1 500). Both these devices are proper smartphones that can multi-task, as opposed to the one-task-at-a-time Asha 311 feature phone. Plus they provide access to a much wider selection of apps via Google Play.

It also provides users with access to the exclusive Pocket Musiq service, allowing you to download thousands of free music tracks including many local artists such as Die Heuwels Fantasties, Karen Zoid and Locnville. For us, this means that the Asha 311, does not do enough to knock the Galaxy Pocket off its budget leading perch.