Independent mobile ad network, InMobi, has released its May 2011 Mobile Insights Report for Africa, providing insights on mobile advertising trends on the continent.

Data from the report shows that InMobi now serves an impressive 4.2 billion impressions a month in Africa, up 37.9% from 3 billion in February 2011.

Key highlights of the South African data include the fact that smartphone impressions have grown by 34% for the period, with 223 million mobile ad impressions coming from smartphones on a monthly basis.

With almost 74% ad share, Samsung (35%) and Nokia (39%) dominate the market, with BlackBerry holding company Research In Motion coming in third with a 13% share. Google’s Android is present in the market with 9.7 million monthly impressions. Nokia remains the largest manufacturer with a 20% stake, but it has lost 3.1 points in just 90 days to BlackBerry smartphone and tablet maker RIM (+3.6). 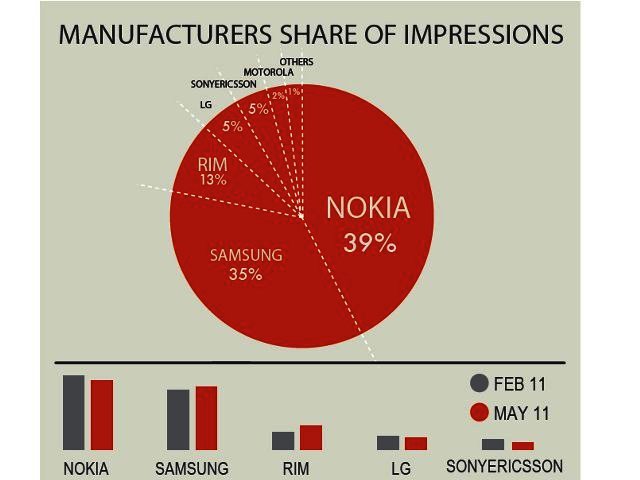 South Africa shows 36% higher share of impressions on smart devices compared to other African countries. However, the relatively slow pickup of smart devices in Africa is highlighted by the fact that South African smartphone impression share is only about half the global average.

The report finds that Botswana, Ethiopia and Nigeria show the fastest mobile ad growth in mobile markets in Africa between February and May 2011. Nigeria and South Africa maintain the top two positions as the largest African mobile markets and now represent two of every five mobile ads across the continent.
Isis Nyong’o, vice president and managing director of InMobi Africa said: “Mobile media continues to consume the mindset of consumers across the continent. As mobile ad impressions continue to grow rapidly, it’s evidence that more consumers are using the mobile web and current users are highly engaged.”
TAGS:
InMobimobile adssmartphoneRIMNokialocal news
USER COMMENTS