Very famous for their  smartphones and recently voted as the number one brand in SA for young people, BlackBerry has also, like much of the competition, taken to tablets. Its Wi-Fi only 7” PlayBook is the result and we must say that we’ve taken a liking to it.

User-friendliness
It is the device’s user friendliness that deserves some serious kudos. Based not on BlackBerry’s regular smartphone operating system, RIM opted to develop BlackBerry Tablet OS on the QNX open-source system, acquired in 2010.
This new OS can compare in the looks department to anything Apple and Android can offer, while it also functions a treat thanks to an innovative “sweep up and sweep down” system of control. Sweep your finger upwards over the screen to gain access to your applications or to exit an application, while sweeping downward provides you with all your different settings or options if opened inside an app.
This worked amazingly well and shows that tablet life does not stop with iOS and Android, while we can’t wait to see what QNX does to BlackBerry smartphones once adopted. 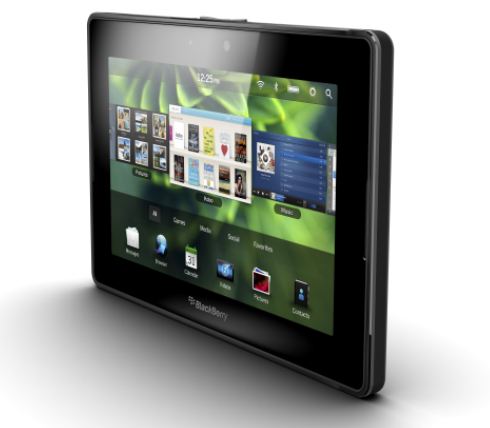 Bridge over troubled waters
One thing we always like about BlackBerry phones is how well they notify you about events. This is not the case with the PlayBook, to be blamed on two problems. Firstly the PlayBook does not integrate with your BlackBerry services such as email, contacts or calendar natively, instead it has to pair to your BlackBerry smartphone via an application called Bridge (already installed on the PlayBook, but to be downloaded on your phone). Secondly, a number of services such as Twitter are not supported via dedicated services.
Once paired your BlackBerry services will show up, while you can also use your BIS package to surf the net, albeit on a lesser browser than the quite excellent one the Playbook offers (that, unlike the iPad, also supports Flash brilliantly). Native support is expected later, and so too a 3G + Wi-Fi version.
Connecting via BlackBerry Bridge requires Bluetooth on your phone to be switched on and then a few seconds of pairing. Once the link is established your mail is secure and it remains this way up until the link between devices are broken at which time all traces of your BB services disappears off your PlayBook.
It’s not the easiest way to do things, although IT managers can smile about a lot less worries around security issues. BlackBerry Messenger is in actual fact present - you just need the updated version of the Messenger app installed on your phone. BBM's popularity can drive sales on the PlayBook, especially since the keyboard is so easy to type on. It really shows its worth on the Word To Go document creation and editing app, with BlackBerry also thoughtfully including the Sheet To Go (spreadsheets) and Slideshow To Go (PowerPoint) packages – all free of charge unlike Apple and Android where you have to pay for such necessities.
Email and services
While services such as Hotmail and Gmail can be accessed via website shortcuts, the PlayBook does not support them natively, so you don’t get notified when new mails arrive. Ditto for Twitter with no client supported and the same applying to Skype. We hope it’s only a question of time before these services do get integrated since they are part and parcel of the tablet experience.
There is also much talk about the PlayBook being able to support Android apps – an excellent move since Android market offers a whole heap more apps than the BlackBerry Market. When this will happen though is anybodies guess, since the Software Development Kit (SDK) needed by developers to port their Android apps has not been released yet. 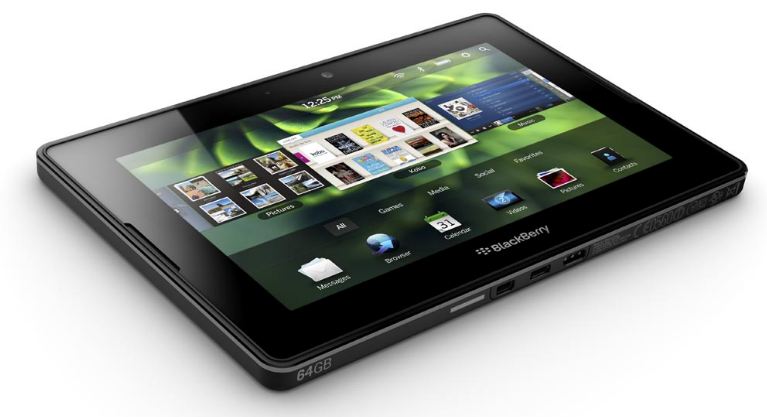 Size matters
Opinion about tablet sizes are much divided here in the TechSmart office, as it is in market. Some prefer the smaller, more manageable 7” size of the PlayBook and HTC Flyer, while others reckon this is simply an oversized smartphone, rather opting for the 10” on offer from the iPad and Acer A500. The PlayBook’s 600 x 1024 pixels resolution is equal to what’s on offer from other 7” devices such as the original Samsung Galaxy Tab and offers a decent viewing experience.
On top of the device you’ll find media play/pause as well as volume buttons, while the power button is right beside it. If you prefer hooking up your devices to an HD television you’ll be very happy with the PlayBook’s mini HDMI port, while the device also splits the screens once connected- allowing you to continue work on the PlayBook, while a movie plays on the big screen. As with almost all other devices on offer, the HDMI cable is not included.

Unfortunately no microUSB slot is offered - a shame since it’s always nice to have the option to expand the amount of memory at your disposal, especially on the 16 GB model.
While taking photos and videos on the PlayBook is satisfactory, its handling of video, especially its support of the popular DivX files, is complimentary. On a number of Android devices we’ve seen less than impressive file support, meaning that most of your mainstream movie files simply did not work. The audio on the device is sufficiently loud.
Also onboard are full versions of the evergreen Tetris and Need for Speed Undercover, with Undercover a thrill to play as you tilt the PlayBook as you would a real steering wheel.
Performance
We definitely can’t complain about the smooth performance of the PlayBook – scrolling through pictures was a breeze, the apps menu was fast and responsive and even when doing some serious multitasking we never felt that it offered less than expected. The powerful 1 GHz dual-core Cortex-A9 CPU is to blame for this, while 1 GB of RAM also helps.
All your open apps are displayed in-line next to each other, making it easy to scroll through them. It also showcases the multitasking strength of the PlayBook, with some apps, such as movies or games, being showcased as they are running live in the background.
Conclusion
Despite all its shortcomings (lack of apps, proper support for Facebook and Twitter, having to use Bridge to connect your BlackBerry services) we really enjoyed our time with the PlayBook. Much more so than on any of their smartphones and a number of Android tablets. It does a heck of a job with multitasking while also offering a very user friendly and intuitive interface thanks to the new BlackBerry Tablet operating system.
We tested the 16 GB model, while no word yet is known on whether the 32 GB and 64 GB models will appear in SA. Also not known is the price, which we hope and pray to be a competitive one.
Pros:
Easy to use, excellent multi-tasking, great video playing abilities.
Cons:
Have to use Bridge to connect to BB services, email integration lacking, apps lacking.