The world’s first Bluetooth enabled, global handheld satellite phone in the market has been launched in South Africa by Radio Holland. The company explained that the Inmarsat IsatPhone Pro is a robust phone that is built to operate on the most reliable satellite communications networks in the world.

The device, which is small and lightweight, offers satellite telephony, voicemail, text and email messaging and GPS location data. It additionally boasts a battery life that provides up to eight hours talk time and up to 100 hours standby time.The phone further features a colour screen and a large key pad, which enables easy dialling when wearing gloves. Additionally, the phone features a ‘one touch emergency button’ which provides a user’s GPS position in latitude/longitude coordinates.

As would be expected from a satellite phone that has greatest use in areas that do not enjoy typical cellular coverage, the Inmarsat IsatPhone Pro is splash and shock resistant and designed to work in a variety of extreme conditions.These include rain and dust storms and  temperatures ranging from -20°C to 55°C. Along with being dustproof, the phone has a humidity tolerance from 0% to 95%. 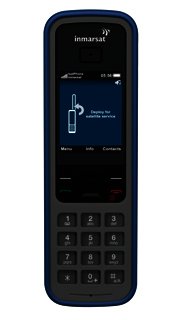 The Inmarsat IsatPhone Pro
The phone operates globally over the America’s, Europe, Middle East, Africa and Asia-Pacific Inmarsat satellite regions. The languages supported are Arabic, Chinese, English, French, Japanese, Portuguese, Russian and Spanish.The company explained that one notable advantage of the satellite phone, particularly for those travelling outside of South Africa, was that it provided an affordable mobile communication alternative, as there are no roaming costs compared to other mobile phones.

The phone is particularly targeted for use in the fishing, transporting and other marine and travel related industries. However, the company stressed that it is also ideal for use by outdoor enthusiasts when going sport fishing, hiking, 4x4-ing or when camping outside of South African borders.