This morning’s big news comes from Nikon, who has announced that it is introducing a new digital camera system, the Nikon 1. This follows in the steps of, amongst others, the Olympus PEN cameras built on the Micro Four Thirds mirrorless standard, which combine compact form camera bodies with the flexibility of interchangeable lenses. Additionally, along with new cameras that take advantage of the system, the company further detailed new approaches to photography itself.

"This is Nikon's most significant announcement since we introduced the digital camera 14 years ago," said Takami Tsuchida, the president of Nikon Europe.
New Cameras
Alongside the announcement, Nikon further launched two new Nikon 1 cameras that take advantage of the new system. While specifications are sparse at present, the company revealed that the J1 is a small and light camera with a built-in flash that is aimed at the more casual photographer. The J1 will be available in five colours: matt black, high-gloss white, silver, high-gloss red and hot pink. The Nikon 1 V1 boasts a high resolution viewfinder as well as an expandable multi accessory port which allows users to attach an external flash and other accessories. It will be available in matt black or high-gloss white.

Jordi Brinkman, product manager at Nikon Europe, elaborated that Nikon engineers have managed to house an incredibly powerful processor and sensor in a sleek, minimalist Nikon 1 body design. He asserted that, along with being the “world's fastest cameras,” they further boast features that have never been seen before, such as shooting modes like Motion Snapshot and Smart Photo Selector. He added that the 1 NIKKOR lenses have additionally been designed with portability and movie making in mind. 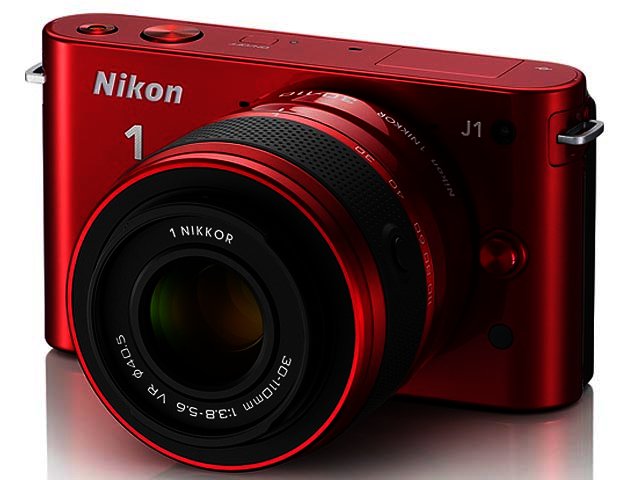 The Nikon J1 camera
New shooting modes
The company elaborated that Motion Snapshot is a “new concept in picture-taking. It captures fleeting moments and plays them back in a way that makes your picture appear that it is alive”. This mode simultaneously records a slow motion movie and a still image, then instantly combines the two to deliver a moving photo.
The other new innovation on offer by the new system is Smart Photo Selector, which records 20 high resolution images at high speed and automatically selects the five best shots based on facial expressions, composition and focus. It then displays the best image on the high-resolution LCD screen. The company explained that if the photographer is not happy with the photo, the camera will suggest other images to choose from. This mode is aimed at addressing the problem faced by photographers who miss the ‘defining moment’ (split second when the best image can be captured), by triggering the shutter a second too early or too late.
New Features
The new system further features high-speed continuous 10 megapixel images at 60 frames per second, along with full HD movie capability, at 60 or 30 frames per second. Photographers can also capture a high resolution still image while continuing to take a movie, or capture action in extreme slow motion.
New Lenses
The new lens mount, the 1-mount, caters for the Nikon 1 system’s range of interchangeable 1 NIKKOR lenses. These include the 1 NIKKOR VR 10-30mm (standard 3x zoom lens), the retractable 1 NIKKOR VR 30-110mm (telephoto zoom lens) the 1 NIKKOR 10mm (fixed-focal length lens) for wide-angle photography, and the 1 NIKKOR 10-100mm PD-ZOOM (power-drive zoom with adjustable speed) lens which is aimed at photographing movies. However, Nikon added that future 1 NIKKOR lenses are already in development.
The company elaborated that with the F-mount adapter accessory, Nikon DSLR system owners will be able to use any NIKKOR D-SLR lens with a Nikon 1 camera, and reassured that all AF-S and AF-I NIKKOR lenses are compatible with the Nikon 1 autofocus system. 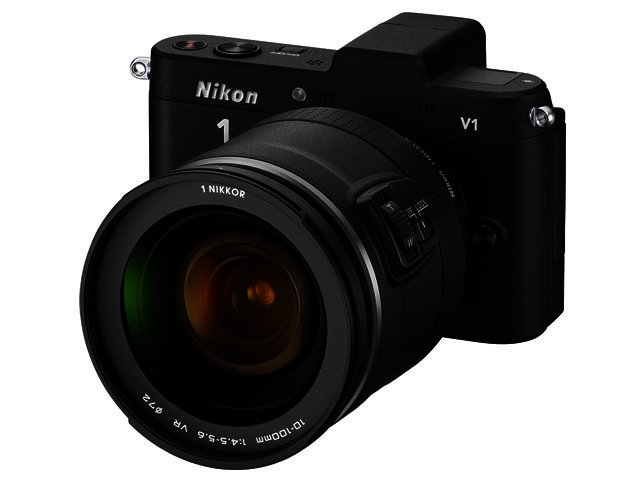 Additional accessories which are compatible with the Nikon V1 include the tiny SB-N5 Speedlight flashwhich can be rotated vertically or horizontally, while a capture illuminator (LED) on the front of the unit provides extra light when using Motion Snapshot or Smart Photo Selector in the dark.GPS functionality can be added to the V1 through the ultra-compact GP-N100 GPS unit, which attaches directly to the Nikon V1’s multi-accessory port and automatically records latitude, longitude, altitude and time as ‘geotags’ in the image data.

Small is big
With this new development, Nikon has clearly upped its game, and joined the ranks of the mirrorless Micro Four Thirds cameras, such as the Olympus PEN E-PL2, as well as others built around the full sized APS-C sensors such as the Sony Alpha NEX 3 and Samsung’s NX 100. These combine compact camera forms with the versatility of a broad array of lenses. It has also not so subtly thrown down the gauntlet to Canon, who as yet, does not have a compact form line that caters for interchangeable lenses. However, it will be interesting to see whether that changes in the future.
TAGS:
NikonNikon 1mirrorless camerascamerasmicro four thirds
USER COMMENTS