Market research firm IHS iSuppli has stated that shipments of ultrabooks is expected to rise to account for over 40% of all notebooks by 2015. Ultrabooks are notebooks boasting an extremely thin and light profile and are powered by 2nd generation Intel Core processors. They include tablet like features such as instant-on activation, always-connected wireless links, solid state drives and longer battery life. 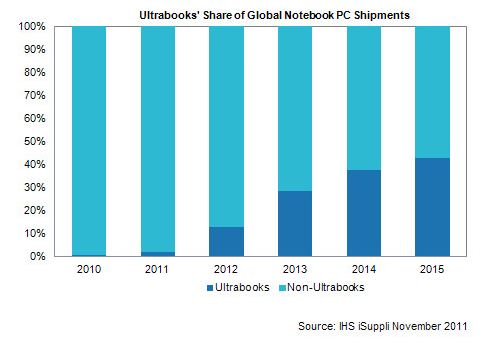 IHS iSuppli views the ultrabook as a means for the PC makers to stave off the rising competitive threat posed by tablets. While media tablets aren’t expected to bring an end to the notebook PC market, they are contributing to slowing growth in the segment.

According to the company Apple’s iPad is at the forefront of the tablet charge, with the media tablet market set to boom in the coming years. Global tablet shipments is expected to rise at a compound annual growth rate (CAGR) of more than 42% from 2011 to 2015. This, whilst the notebook market has entered a stage of maturity, with shipments predicted to increase at a CAGR of only 10% during the same period.

“With media tablets having already reversed the expansion of the previously fast-growing netbook platform, PC makers now are keenly aware that the notebook must evolve to maintain market growth and relevance. Enter the ultrabook, which borrows some of the form-factor and user-interface advantages of the media tablet to enhance the allure of the venerable notebook.”
In related news Acer has announced its first ultrabook, the Acer Aspire S3, whilst Asus has unveiled the Zenbook ultrabook.
TAGS:
ultrabooksIHS iSupplinotebook marketPC markettablet
USER COMMENTS