Samsung has finally announced the impending launch of its Galaxy Note 10.1, which made a brief appearance earlier this year before disappearing from the tablet scene for a while.

However, launch details reveal a tablet intent on merging the best of both worlds of the Korean manufacturer’s 10.1” tablet and its smaller, 5.3” phablet, the Galaxy Note.

According to the company, the Galaxy Note 10.1, which will apparently be available this month worldwide, will offer the functionality and precision of a pen and paper on a 10.1” WXGA (1280x800) LCD large display.

Performance wise, the Android 4.0 (Ice Cream Sandwich) based tablet will boast a 1.4 GHz quad-core processor and 2 GB of memory. Additionally, it will be available in 16 GB, 32 GB and 64 GB versions, and will be expandable up to a further 64 GB via the microSD card slot.

Launch versions will comprise of both Wi-Fi only, and Wi-Fi and 3G options, while an LTE version is slated for release at a later date (however, we wouldn’t hold our breath for local release of the latter, considering the lack of LTE networks in South Africa at present).

Users can further expect a 1.9 megapixel front facing camera and a five megapixel back snapper; the latter is less disappointing when you consider that few users would likely make a habit of taking photos with a 10.1” sized device.

The more exciting new offerings, though, come from the actual features on offer. The first of these is multitasking. Samsung explained that, with the Galaxy Note 10.1’s Multiscreen feature, users can effortlessly utilise two different applications side-by-side simultaneously for easy multitasking.
This would enable users to, for example, view web pages or videos, or launch other applications while writing or sketching ideas with the S Pen on the other half of the screen. Furthermore, users will be able to freely capture and crop images, and paste them onto the other screen to make personal notes.
This is somewhat reminiscent of the Microsoft Courier idea, which offered a similar kind of functionality across two screens. Sadly, that tablet never saw the light of day. 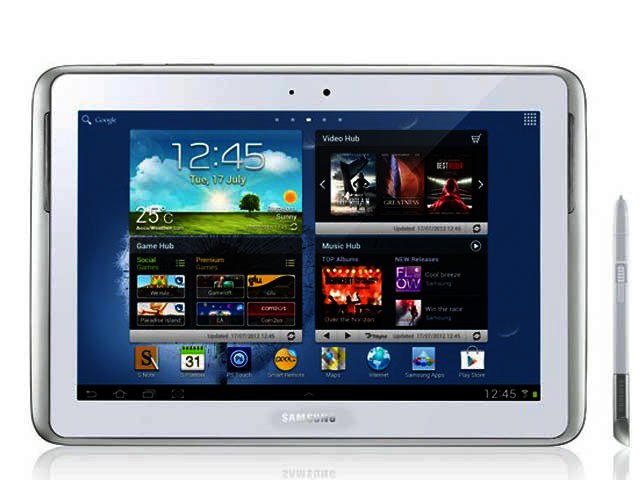 The Galaxy Note 10.1 appears to be bringing functionality introduced in the smaller Galaxy Note,

as well as the Galaxy S3, to a 10.1" screen.
Notably creative
As the active digitiser-stylus and name might suggest, The Galaxy Note 10.1 is primarily concerned with taking notes, capturing ideas, sketching and digital writing.
According to JK Shin, President of IT and mobile communications division at Samsung Electronics, history has shown that taking notes, capturing ideas immediately, and sketching to realise them is the most personal and natural way to be more productive and creative.
“The advanced technology and features included in Galaxy Note 10.1 give users the power to produce, create and customise communications,” he added.
To this end, a 6.5 mm S Pen, is imbedded in the device, much like a smaller version was in the Galaxy Note, that when removed, automatically launches specially-optimised applications, including S Note, S Planner, Crayon physics, Adobe Photoshop Touch, and Polaris Office.
Something borrowed
The Shape Match and Formula Match features, recently introduced via the Premium Suite for the smaller phablet, help correct and digitise geometric shapes and solve numeric formulas hand-written with the S Pen respectively. The S Note is also integrated with knowledge search engines so that users can search for content, obtain information, and easily drag and drop content onto S Notes without having to switch between screens.
Other features, apparently borrowed from the recently launched Galaxy S3, include Smart Stay, which tracks the user’s eyes to ensure that the screen is always on while being looked at, and Pop Up Play, which allows the user to watch a video anywhere on their screen while simultaneously running other tasks.
Additionally, AllShare Play enables users to share content with a large group in real-time by connecting the Galaxy Note 10.1 to Samsung HD TVs, mobile tablets, notebook, and other  electronic devices on the same network. With AllShare Group Cast, users can further share and collaborate on documents, presentations, or images without loading the files separately.
To the point
Alas, we still do not know local prices at this point. However, as the video below indicates, the Galaxy Note 10.1 appears to be targeted at a particular kind of user, as well as industries like education and content creation, while offering enough of a differentiation to distinguish itself from the many other tablets on the market.
Indeed, given the popularity of the 5.3” Galaxy Note, to which a successor is also roundly expected, resurrecting the stylus (or S-pen, or digitiser) may just be a stroke of genius.
TAGS:
SamsungGalaxy Note 10.1tablets
USER COMMENTS