After showcasing its top of the line offering in the Galaxy S3, Korean tech giant Samsung now focuses on the entry-level segment of the smartphone market with the introduction of its most affordable Galaxy Android smartphone yet. It retails for a meagre R999.

Samsung’s Galaxy Pocket will certainly slip comfortably within most pockets since it measures 103.7 x 57.5 x 12 mm and weighs a mere 97 g. The Pocket boasts a 2.8" (240 x 320 pixel resolution) capacitive touchscreen, which features a low 143 pixels per inch count. This pixel density is at least better compared to that offered (125 ppi) on the display of the LG Optimus L3 E400 (R1500).

Powering this budget-friendly device is a ARM 11 single-core processor running at 832 MHz, which should ensure that things remain snappy whilst navigating the mobile operating system (OS). Speaking of which, the Pocket operates on Google’s Android 2.3 (Gingerbread) mobile OS along with Samsung’s TouchWiz interface.

In terms of connectivity the Pocket packs 3G HSDPA with speeds up to 3.6 Mbps, Wi-Fi 802.11n along with a Wi-Fi hotspot feature and Bluetooth version 3.0 with A2DP. Samsung equipped the Pocket with a budget 2 MP snapper that records QVGA videos at 15 frames per second (fps). Also onboard is Stereo FM radio with RDS, a handy 4 GB (only 3 GB is user accessible) worth of internal storage and microSD memory card slot that supports cards up to 32 GB in size. 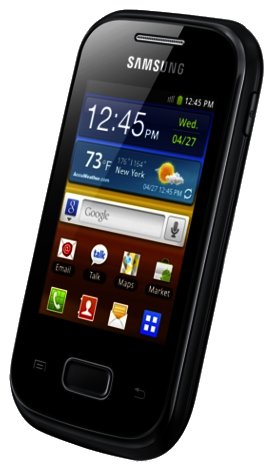 “Whether you’re surfing the web, downloading files or uploading pictures to your social networking accounts, the Galaxy Pocket performs like a pro,” stated Craige Fleischer, director of mobile communications at Samsung Electronics. “The efficient and smart experience is led by the Android 2.3 Gingerbread platform, Google Mobile Services, Samsung Apps and the easy to use TouchWiz interface.”

In related news, Samsung recently passed the 50 million mark for combined sales of its Galaxy S (24 million units) and Galaxy SII (over 28 million) smartphones, and revealed that it has sold over seven million Galaxy Note smartphones-tablet-hybrid devices. The company also  announced the local availability of the Android 4.0 (Ice Cream Sandwich) software upgrade for the Galaxy SII, with other models to follow soon.
TAGS:
Samsunglocal newssmartphoneAndroidmobile OSTouchWiz
USER COMMENTS