Is it a smartphone or a tablet? The hybrid Samsung Galaxy Note tends to evoke this and a number of other questions when placed on the table. We try to answer ten of the Note’s most Frequently Asked Questions.

1. Jeez it’s big! Is it not uncomfortable?

Indeed it is, and yes, but less so than expected. The Note’s 5.3” screen is supposed to provide a middle ground between the 4” smartphone and the 7” tablet. It is at its most uncomfortable pressed against your head when making calls, since it feels a bit like talking into a small serving tray. However, carrying it around in your denim pocket proved to be less obtrusive than we thought.
Although quite wide (83 mm), the fact that it is only 9.7 mm thick makes a big difference (the world’s thinnest smartphone, the Motorola RAZR is 7.9 mm, while the Galaxy S II is 8.5 mm). 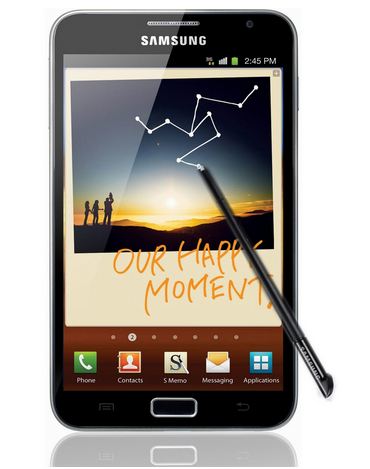 2. It looks like it's a bit fragile. Will it break?

For the two weeks we tested it, ours didn’t, and we must say that we felt more comfortable with the Note than the skinny Galaxy S II. It also has Gorilla Glass onboard, although an all aluminium back cover would have gone a long way to further alleviate fears.

Everything your smartphone does, including calling, only with a bigger screen. Samsung did a sterling job with the Super AMOLED display which has a resolution of 800 x 1280 pixels, meaning a higher pixel count than on most smartphones and on par with some 10" tablets.

And you can tell - websites displayed superbly, certain games looked excellent, and it was a joy to use when snapping and viewing photos, along with very decent full HD movies. Watching YouTube movies were a pleasure, and thanks to decent onboard sound, it’s more than possible to share a funny video with friends. 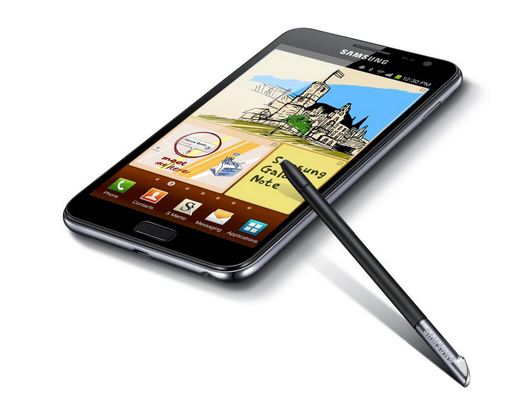 The Galaxy Note comes with the neat S Pen stylus.

4. What’s that in your other hand?

It’s the Note’s S Pen stylus, reminding us of the good old days of the classic Sony Ericsson P900. Touchscreen technology has come a long way since then, and to tell the truth we barely used the stylus. The screen is so large that pressing the correct icon or key on the virtual keypad is done much easier by finger, while we also didn’t really bother with the Note’s note-taking capabilities.

For those for whom note taking is of prime concern, the S Memo app allows you to do so. You can also pull in photos to write on, and share your notes via MMS, Facebook or email. For those with an artistic bent, S Choice provides you with a number of creative apps via the Samsung Apps store, with our personal favourite being Zen Brush, turning the stylus (or your finger) into an ink brush to paint with.

Also onboard is a good Photo editor (add frames, crop, play with the colour and add effects such as vintage or tilt-shift), while the Video editor helps with, well editing movies.

There are clear benefits of such a stylus for creative types, but after the initial fun of scribbling with the stylus it barely made it from its slot at the back of the device. Oh yes, it does not activate the phone’s Home and Back soft buttons, which is a slight irritation, as it means you have to use both stylus and finger. That said, it’s a lot more functional than the HTC Flyer’s limited stylus functionality. 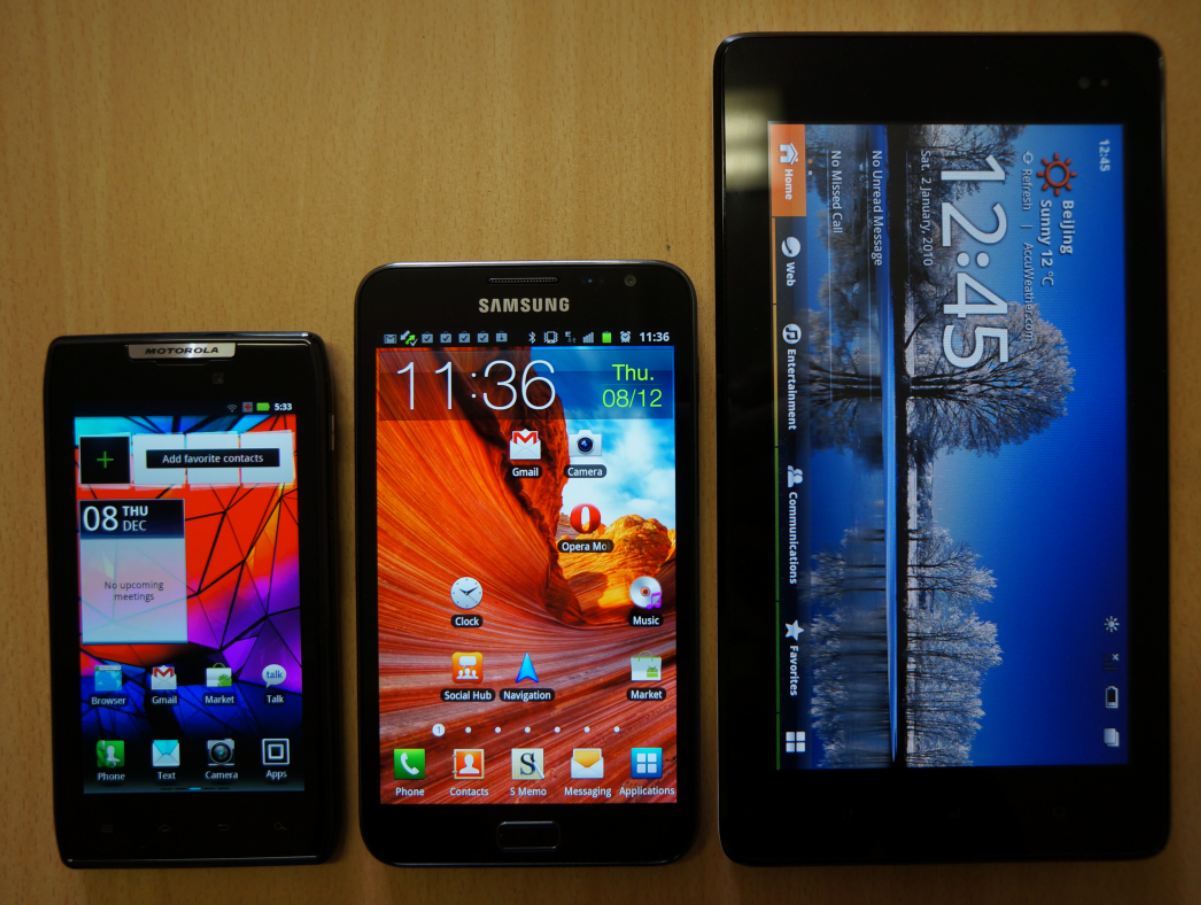 5. Can I create documents and spreadsheets?

Thanks to Polaris Office you can, but it does not mean it’s the most elegant experience. Many people find it a pain to type on a 7” tablet, and the 5.3” Note fares even worse. Rather use Polaris to view and do small edits on documents and spreadsheets. Like most Android phones email setup is also catered for.

If you are going to do a lot of typing, or even just a regular amount of emailing and SMSing, there are better keyboards available from Android Market than Samsung’s preinstalled one. Rather download the easy-to-use SwiftKey app.

Our unit provided 16 GB to store documents, movies and photos on, while a microSD card slot is also provided.

6. Is the Samsung Note fast?

Very much so, in no small part thanks to the dual-core 1.4 GHz ARM Cortex-A9 processor, which keeps things gliding along very nicely indeed. Moving from screen to screen was a breeze, and the same applies to browsing through pictures, with no time spent waiting for pics to render.

7. It runs on Android Honeycomb, right?

Good guess, but no. Onboard is Android Gingerbread 2.3.5, and although Samsung has confirmed an Ice Cream Sandwich update for the Note, we are unsure about the exact date for this in SA.

For such a large device, Samsung could have employed TouchWiz to make one-handed operation a lot easier. For example, when calling, the icon for the Keypad is placed in the top left-hand corner, making an uncomfortable stretch of the thumb necessary, or unfortunately the need for the help of another hand. We also did not like the circle motives that popped up when we needed to answer a call or to read a new SMS. There were a number of times that we had to press more than once to activate the necessary action. 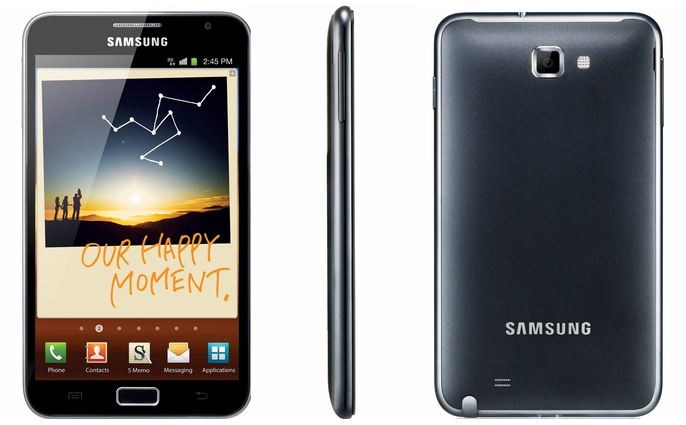 The S Pen stylus slides in nicely in the bottom left hand corner on the back of the Note.

8. How good is the battery life?

We received slightly better life than we did with most Android phones, meaning a bit more than a day. When it did charge it took its time doing so, so we still had to recharge during the night.

9. What does the Galaxy Note cost?

To be honest, we’re in two minds about this. The beautiful 5.3” screen made it very easy to read mail, browse the web or read ebooks, and we do suspect we’ll have a problem with moving back to a 4” screen after our testing period comes to an end. So we won’t mind the Samsung Galaxy Note replacing our smartphone or even a 7” tablet, but we would still buy a separate 10” tablet rather than only have the Note. That said, the very expensive asking price of this hybrid device should solve the “buy or not?” dilemma for most automatically.

Pros: Very lovely screen, powerful performance, excellent camera and video, less obtrusive than we thought.
Cons: Definitely expensive, typing a pain, more than a smartphone but not quite a 10” tablet.

CONS
Definitely expensive, typing a pain, more than a smartphone but not quite a 10
TAGS:
SamsungSamsung Galaxy NoteAndroidGingerbreadtabletssmartphones
USER COMMENTS