Microsoft says Windows Intune coming to a PC near you soon, unless you’re in SA
The world’s largest digital tech expo CeBIT is currently underway in Hannover, Germany. During the tech fair Microsoft announced that its cloud solution for PC management called Windows Intune, will be available for purchase or a free 30-day trail on 23 March in over 35 countries.
By employing Microsoft's PC management solution via the simple web-based console, SMEs will be able view and update their PCs' malware status, alerts, security policies, etc. Users only require an internet connection and the Windows Intune client installed on each PC that they want to manage. The list of countries stretches from Australia to the US, but doesn’t include South Africa. 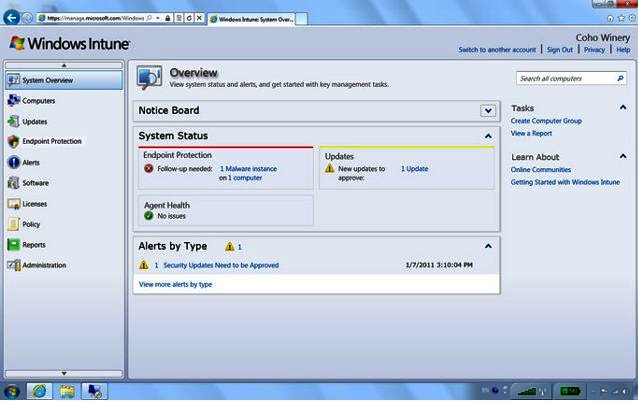 Intel looking to give netbooks a CPU boost
This week Intel announced its dual-core Atom processor N570, which it says will provide netbook users with “a more responsive experience in the same compact form factor and great battery life as single-core Intel Atom processors.”
The Atom N570 runs at 1.66 GHz, with these processors supporting four threads. They also feature 1 MB of L2 cache and DDR3 667 support. PC systems based on this new dual-core Intel Atom processor N570 CPU from the likes of ASUS, Lenovo and Samsung, have been on display throughout the week at CeBIT. Intel stated that it will begin shipping these new CPUs in March.
AMD’s GPU monster makes CeBIT appearance
Engadget has hiked the halls of CeBIT and stumbled upon MSI’s Radeon HD 6990 graphics accelerator card. This dual-GPU card is set to become AMD’s new flagship GPU (a position currently held by its Radeon HD 6970) during this year and MSI referred to it as “the most powerful graphics card” on accompanying press material. Nvidia might disagree with that statement as its reportedly also bringing out a dual-GPU of its own, the GeForce GTX 590.
Pic: Engadget 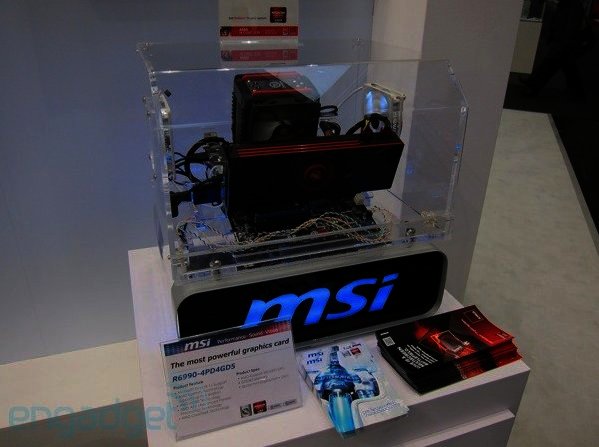 Twitter improves its official iPhone app
Social networking site Twitter introduced a few new features to its Twitter for iPhone app, which it states is the third most used manner of accessing the micro-blogging site after its own Twitter.com portal and mobile portal (mobile.twitter.com).
These improvements include easier uploading of photos, a camera button in the toolbar, enhanced image previews, as well as the ability to view trends based on your location. Besides this links pasted into the Tweet box will now be automatically shortened, with Direct Messages now also being presented in a conversation style view in order to assist users in keeping track of messages. 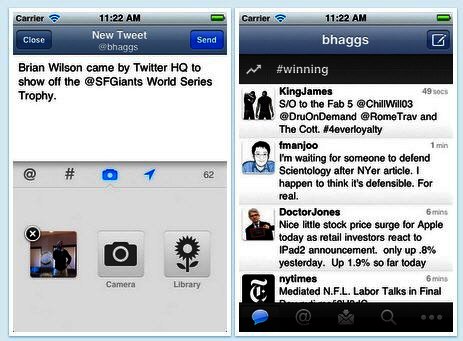 Two and a Half Men actor becomes instant Twitter sensation
On the topic of Twitter, Two and a Half Men star Charlie Sheen managed to set a world record for Twitter this week. According to Mashable, the Guinness community manager Dan Barrett said that Sheen has become the person with the “Fastest Time to Reach 1 Million Followers” on the micro-blogging site.
The star, figured prominently in the news lately because of his partying lifestyle, managed to reach this milestone in a mere 25 hours and 17 minutes. The self proclaimed “unemployed winner” joined Twitter on the 1st of March 2011 and currently has 1 497 991 followers. This isn’t his first Guinness record though, as Sheen also holds the Guinness record for being the “Highest Paid TV Actor Per Episode” at $1.25 million. 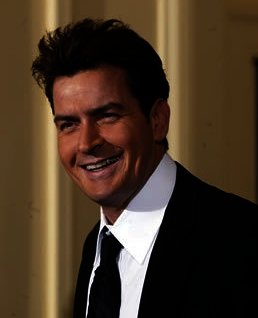 It's all in the eyes

With motion-based PC control not so far off thanks to Asus' WAVI Xtion and Microsoft working on Kinect for Windows, Lenovo has demonstrated yet another input method at CeBIT, enabled via eye tracking. According to ZDNet UK, Lenovo demonstrated a prototype PC kitted with Swedish company Tobii's Eye Tracker Integrated System (IS). It utilise two webcams in order to track pupil movements, enabling the user to interact with certain Windows elements. How long before we see this technology in commercially available machines? As soon as two years according to Tobbi.