Paying ransom doubles cost of recovering from a Ra...
0
comments

The connected home is the home of the future, as video streaming, internet television and increasing numbers of connected devices become a reality in South Africa.

However, while Wi-Fi is often the most convenient method for home users to distribute connectivity through a home, there are several issues that are commonly experienced when using wireless that can prove frustrating if they are not correctly addressed. This is the opinion of Ross Griffiths, product manager at broadband and communication equipment distributor Nology.

Reasons for Wi-Fi dead spots
Griffiths believes that dead spots are a frequent issue, where certain places in homes experience very poor or no wireless reception at all. This happens for a number of reasons, mainly related to the format and layout of the home itself. These configuration issues are caused by inherent limitations in wireless technology itself, in that Wi-Fi penetrates mainly horizontally instead of vertically and is usually unable to penetrate more than six bricks. Homes with concrete floors between levels will experience the problem of dead spots to a greater degree, because of the same limitations.
General interference from wiring within the house and common electrical appliances such as microwaves and other electro-magnetic devices may also cause interruptions in signal which can affect the speed and quality of wireless connectivity.
It is also useful to bear in mind that even when dead spots do not occur, the signal will become weaker the further away from the wireless router the user is.  As the signal penetrates through the house, transfer speeds will drop and connectivity might become unstable.
Placing the router carefully to ensure maximum penetration and coverage is one option, but this is not always practical, since the placement of routers is often dependent on the location of the fixed line entry point into the home.
A few solutions
To remedy this many people turn to stronger antennae and tools such as boosters and repeaters to improve the strength of signal, but this will not always help with penetration and transfer speeds. Griffiths believes however, that solving the wireless dilemma in the home does not involve a lot of complicated equipment or huge cost. It is in fact a simple task which can be dealt with quickly, easily and cost effectively.
Ethernet over power adapters, such as the Billion BiPAC P106N, enable the user to create a broadband network using existing electrical wiring, which allows Internet access to all the rooms, since electrical wiring typically runs throughout the entire house. Ethernet over power adaptors have several advantages, including maintaining constant speeds due to more stable connectivity and eliminating dead spots, since additional devices can be easily added wherever they are required. This technology also eliminates the problems that occur in multi-story buildings, since the electrical wiring runs between floors.
Installation takes a matter of minutes, since the adapter simply needs to be plugged into a power outlet and connected to the master device with the push of a button, creating an instant network connection between the two. This is a far more cost effective solution than running Ethernet cables through the house, while providing the same benefits as this fixed connectivity would with all of the advantages of wireless. 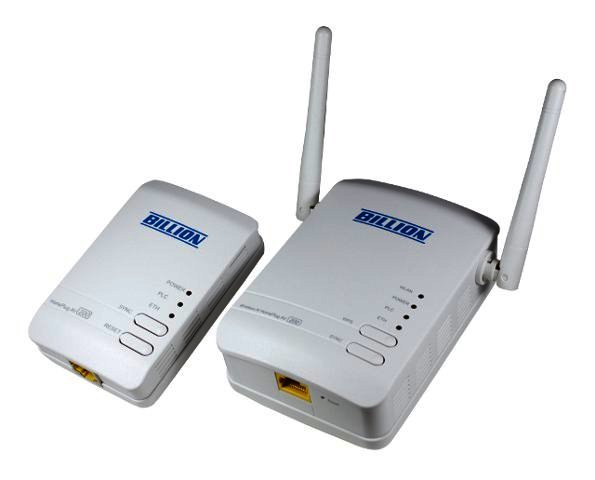