In the realm of portable cameras, it’s all too easy to start longing for something a little different, that rocks the compact camera boat a little and stands out from the crowd. Enter the PowerShot N.

The camera, firstly, is shaped somewhat differently than the usual, bearing a distinctly more square shape rather than a rectangular one. With a screen that can lift ninety degrees to the body, it then resembles a cube in one’s hand. Its design, however, is intentional, as the variable screen enables one to capture stills and video from awkward angles. We found we could easily take photos at ground level, without having to crawl on our stomach, by swivelling the 2.8” LCD screen.

Other differences which distinguish the 12.1 megapixel camera in general use include the absence of the usual shutter release on the camera’s top, and the familiar zoom nib. Rather, images are taken by touching the screen, or by using one of the two control rings encircling the lens. The second control ring accesses the camera’s 8x (28-224 mm equivalent) optical zoom. The control rings can take a little getting used to; thus, we preferred to use one control ring to zoom into our subject and then just capture the image by touching the screen. This latter feature though, has to be enabled in the menu. 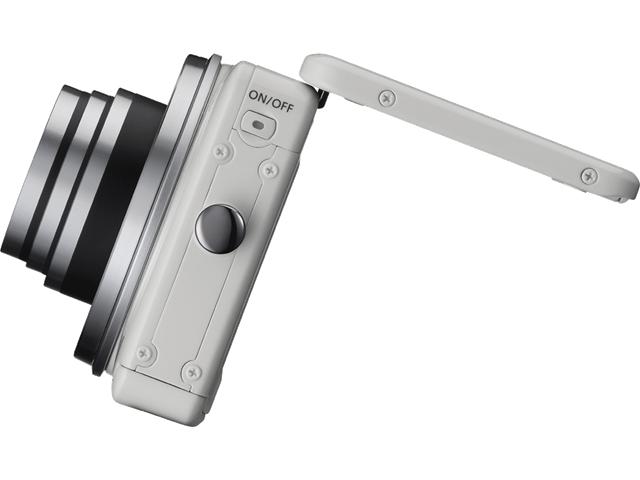 The PowerShot N's unusual design is so for a reason, enabling photographers to easily capture images from awkward angles.

The inclusion of Canon’s DIGIC 5 image processor ensures general use and navigation is quick and responsive. Cementing its role as a creative companion – and challenging the allure of using one’s smartphone camera - is an innovative feature called Creative Shot.

This fires off six different images of the same scene with varying exposures, points of focus, contrast, composition and colour options, often producing some interesting, even surprising, results.  Also onboard is Wi-Fi for connecting to one’s notebook, tablet or smartphone. Like a smartphone, the camera is smaller than most compacts, connected, and creatively orientated. This enables shooters to connect the PowerShot N to their smart device and share their efforts via the social network of their choice.

The Canon PowerShot N may seem odd at first, but that is because it marches to the beat of its own, creative tune. When all is said and done, the camera’s unique, whimsical and funky approach is a breath of fresh air. It has a RRP of R3 700