The original Crysis, released back in 2007 on the PC, was such a graphical masterpiece that for years afterwards gamers would measure the mettle of their rigs against its GPU searing powers. Now Crysis 2 attempts to emulate its predecessors' legendary reputation, but does the multi-platform sequel have what it takes to keep up with today’s gaming heavyweights?

Crysis 2 takes place in the year 2024 in New York City, which recreated in all its splendour creates a stark contrast to the first game's lush and remote islands. As we start our journey we find ourselves in the middle of a much larger conflict, with the Ceph alien invaders raining destruction down on the city.

With a deadly virus having been unleashed upon its population, the situation in the city quickly spirals out of control. We enter this convoluted fray as a Marine named Alcatraz, and through a series of dramatic events we soon find ourselves sporting one of Crynet's finest Nanosuits, the most technologically advanced suit of armour known to man.

Crysis 2's narrative, penned by sci-fi author Richard K. Morgan, though at times confusing, always keeps you intrigued and wanting more. In addition to the devastating alien threat the story also sees the player battling against human enemies, with corporate and governmental interests creating an ominous web to unravel. 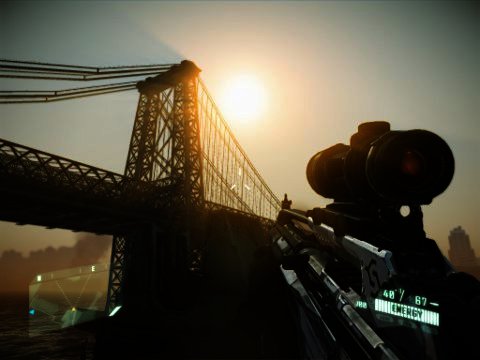 Beautiful scenery is a mainstay of this game.

One of the things we enjoyed most about Crysis 2's story was simply the way it was told. There were some fears that the Crysis experience would be “dumbed down” when it was announced that Crysis 2 would be coming to consoles, but we're happy to say that these can be put to bed. While the game is undoubtedly more linear than its predecessor, Crysis 2 is not your CoD recipe first-person shooter. Instead Crytek has crafted a game which bears much more resemblance to older shooters such as Half-Life, in that all its content isn't forced down your throat in a steady stream of so-called “immersion”.

No, Crysis 2 depends on the abilities of the player to enjoy the game. Meaning there isn't going to be set-piece “break and enter” sequences every couple of hundred yards, and neither will the camera forcefully focus itself on every detail when a dramatic or scripted event occurs. Running through the ruined streets of New York alien ships may come bearing down from the sky, helicopters may burst into flames as they're shot down and the entire city will rumble as ominous alien sounds are heard in the distance. But it's up to the player to experience these things, if you'd prefer to run past onto the next objective without a second glance then so be it, Crysis 2 gives you these things to enjoy, it doesn't force you to. 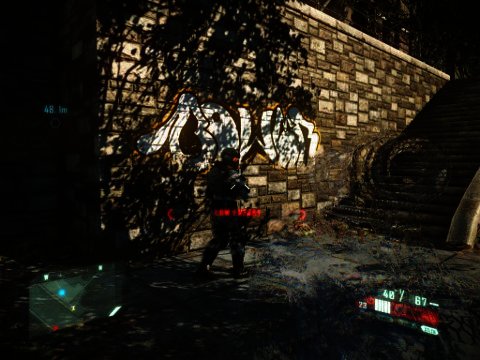 Apart from the great subtle way that events in the game take place, gameplay in Crysis 2 is generally a smooth and wholly enjoyable affair. Wearing the high-tech nanosuit the player is turned into a lethal killing machine, capable of smashing through lines of enemies, or if you prefer, sowing fear in your enemies hearts as you kill them off one by one, flitting by as little more than a shadow.

And this isn't mere narrative exaggeration, in Crysis 2 you can actually do this, with the Nanosuit making us feel like a mixture between Batman and the Terminator. Once again, Crytek nailed it on the variable nature of gameplay. Crysis 2 allows the player to approach a situation in a myriad of different ways, and like last time, your Nanosuit has three main modes, strength, armour and stealth.

The different modes can be accessed quickly, and learning to master the balance between them is one of the core requirements to becoming a successful Nanosuit user. “Strength” mode enables the player to run faster, jump higher and hit harder. The abilities of this mode can be used passively this time around, in other words, pressing ‘Shift’ will automatically activate strength mode boosted sprinting. “Armour” mode on the other hand is activated by pressing 'Q' and virtually turns you into a walking tank, capable of shrugging off 7.62 mm rounds as if they were BB gun pellets. 'Stealth' mode allows the player to follow the stealth or sniping approaches much more easily, allowing you to become almost completely invisible.

Furthermore, the Nanosuit has a limited amount of energy which is (luckily) freely and quickly recharged when it's not being used. Suit energy will deplete when players activate modes such as 'stealth' or 'armour', and will deplete faster when you're sprinting or actively taking hits, so be sure to constantly monitor your suit's energy levels. Another of the suit’s abilities is called ‘Nanovision’, giving the player the ability to see heat signatures and thus opening yet another avenue in stealthy gameplay. 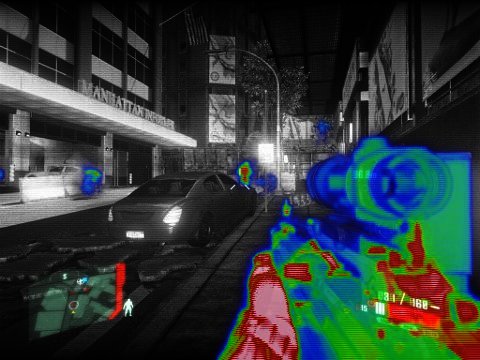 Nanovision helps you keep an eye on threats.

During the first half of the game players will be pitted against relatively easy human enemies, but as the conflict escalates more and more alien foes appear before you, already having finished off anyone not in a Nanosuit.

The Aliens come in different shapes and sizes, making dealing with a group of them a somewhat complicated, but no less satisfying experience. Some of them gracefully leap between skyscrapers, seeking you out like feline predators of the skies, while others display more conventional fighting styles, firing bolts of energy at you then seeking cover. Yet others rain down rockets and ominously stomp cars into the ground, usually requiring some of their own missile administered medicine to go down.

Taking down an alien and inspecting its corpse yields the player a resource known as Nano Catalyst, an alien substance which can be used to upgrade your suit. Even aspects such as this is elegantly handled in Crysis 2, with the player simply pressing a button to bring up the upgrade menu, which is graphically overlayed onto the five fingers of your right hand. Here players can unlock new suit abilities and upgrades, with weapon upgrades taking place in a similarly easy manner, enabling players to add silencers, different sights and other attachments to weapons on the fly. 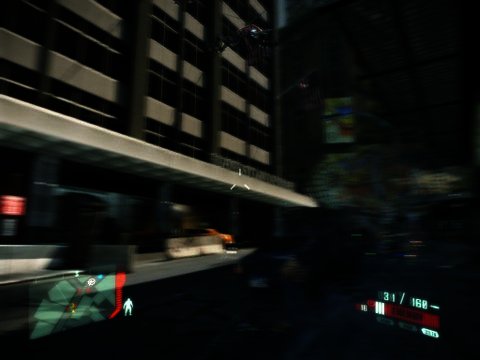 Aliens leap down to eviscerate unwary humans, unless you're invisible that is.

Crysis 2 was always going to be a beautiful game, everyone knew this, yet it didn't stop us from truly admiring the lengths to which the developers went. New York City is recreated in a stunning manner, with vibrant and vivid colours painting a sharp contrast to the usual shades of brown found in shooter games. And while not quite as big as the first game, environments were still pretty sizeable compared to other shooters, with surprisingly far rendering distances helping to create a vivid picture of the ruined city.

Audio throughout the game was good, but what really impressed us was the game's orchestral soundtrack, a beautiful and tension-building performance of the sort usually associated with a new Christopher Nolan movie. 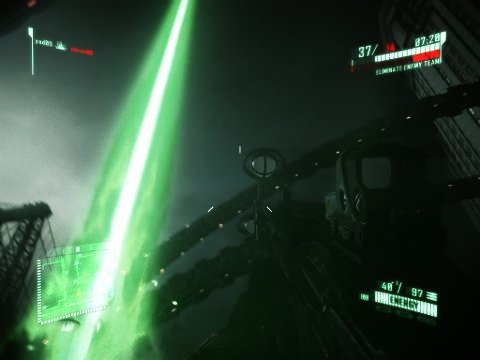 Just a taste of the devestating unlockable multiplayer perks.

The multiplayer side of Crysis 2 takes place in a similar fashion to other modern shooters, with different gametypes, classes and unlocks helping to keep the player engaged. Players can choose between six different multiplayer game modes which bear similarities with popular existing ones such as free-for-all, team deathmatch, capture-the-flag, king-of-the-hill and so forth.

The gametypes each have their own merits, but much of the multiplayer enjoyment comes not from the mode or map, but rather from players having access to the very same Nanosuit abilities they use in single player. This means all players can use armour or stealth mode for example, turning these matches into an exhilarating tug-of-war.

Players with stealth mode active reflect just enough light to be barely visible when viewed carefully, making you leap at every passing shadow, but also allowing you to get in close when used correctly. Using these suit abilities in addition to the normal shooter action going on all around you makes Crysis 2 mulitlplayer a very action-packed experience, with victory not necessarily depending on how good you shoot, but also how well you can use the environment and your Nanosuit to your advantage. 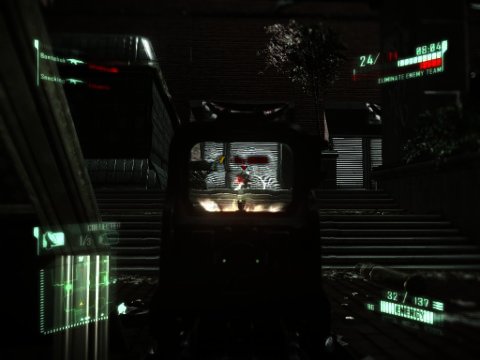 Online Nanosuit combat is highly enjoyable and can keep players busy for some time.

Crysis 2 gives us hope for the future of the first-person shooter genre, delivering a gaming experience that, although not as open as the original, still gives players enough options to enjoy the game on their own terms. An intense storyline and great soundtrack alongside stunning graphics, a myriad of advanced weaponry and of course the one and only Nanosuit, helps give Crysis 2 the edge when it comes to modern first-person shooters.

PROS
Assassinating unwitting victims from close range, throwing cars at enemies or simply ripping them to shreds by literally ripping machine guns out of their mountings.