The fragmentation of the Roman Empire is widely considered to be one of the defining moments in the history of Western civilization. Much as the Mongol hordes after, and the fragmentation of Egypt before, it resulted in a re-balancing of power and a major re-drawing of the world map.

With such historical significance, it seems only natural that Creative Assembly, developers of the Total War franchise would sink their teeth into this particular piece of history sooner or later.

The Total War games occupy a special niche in the strategy gaming landscape: titles which abscond the fantastical and the magical and instead strive to provide a realistic and importantly, historically accurate experience to armchair emperors.

While having a fondness for history obviously helps, the games’ aim to immerse players in the ancient world without requiring a PhD in “Gothic succession rites during the first century AD”. Consequently, Total War: Attila opens with a brief cinematic cut-scene to set the mood, and then immediately drops you into command of a local barbarian war band. Players are not necessarily lectured as to the why and the how, but instead are tasked with discovering the answers to these questions as they progress through the game’s lengthy campaign. 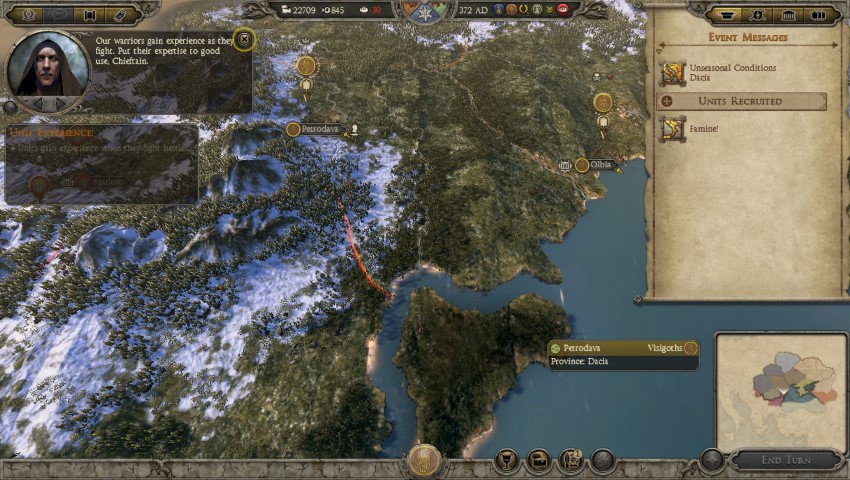 Fundamentally, Total War: Attila has two main gameplay modes; an overarching world map akin to Civilization titles, and a zoomed in down-and-dirty ‘battle mode’ where troop formations can be micro-managed. As any Total War veteran will know, mastering both of these modes is essential if you are to lead your nation to victory, and the depth inherent in both might be a tad intimidating at first.

First, let’s take a look at the grand world view, this mode, as our made-up name implies is essentially a large map of the known world. Players can traverse the map using smooth camera controls to view captured provinces, recruit new troops, set taxation rates, combat famine, and much more. In addition to managing and developing your lands, this mode also allows the strategic deployment of your armies. Be warned though, things can get a bit overwhelming, especially at the start. The interface takes some getting used to and is littered with tiny buttons and menus all over the place, so if you like spreadsheets, good news!

Digging around may take a bit of time at first, but at the end of the day all navigating can be done with nothing but your trusty dual-buttoned mouse at your side. The world view functions as a turn-based system, meaning a limited number of decisions can be made before the end of your turn. Similarly, armies can only move a set distance per turn before having to rest.

If this was all that Total War: Attila offered it would be a fun and engaging game for history buffs. The ‘grand management’ aspect of the game is however just one cog in the Total War machine. The meat of the game lies in personally commanding your armies on the battlefield. 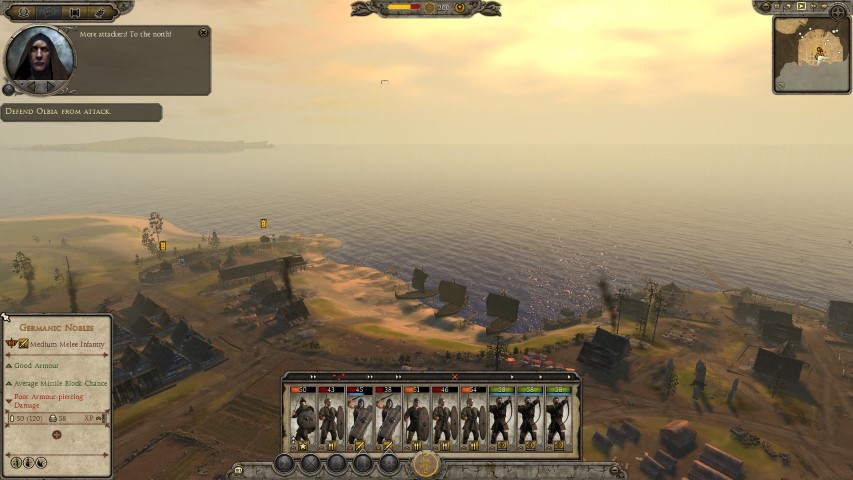 Back in 2004, Rome: Total War wowed gamers with its ability to render massive troop formations in unprecedented detail. While not the first game in the series, it is still considered by many to be the franchise’s jewel. Not only were there thousands of units on-screen, players could zoom in and literally look into the battle-hardened faces of their soldiers (low-resolution faces granted, but still).

Subsequent games in the series have continued this tradition of CPU-abuse by enabling players to lead massive hosts into battle, and Total War: Attila is no exception. Whether you are defending one of your settlements from enemy attack, or you are leading a grand seaborne campaign against your foes, commanding your troops in battle is an engaging and undeniably personal affair.

To give you an idea of what it’s like to walk a day in the shoes of a pre-dark age warlord, let’s imagine our army attacking a heavily defended enemy town. As the rather sluggish loading bar finishes its trek we zoom in on a paused battle screen with our forces arrayed and awaiting orders. Since the outcome of these battles are sometimes balanced on a single flanking manoeuvre gone wrong, the pause button will be one of your greatest weapons, and we recommend using it generously. 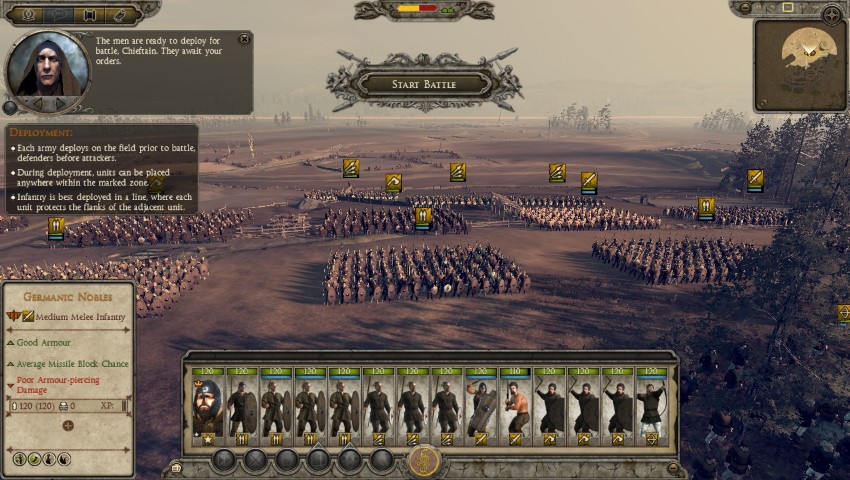 The first thing any prospective general has to master is the camera, in this case controlled by the WASD keys, with added precision granted by mouse zooming and rotating. Next comes actually issuing orders to our units, another exercise which can be managed primarily by the mouse, but is enhanced with a number of keyboard shortcuts. In addition to the traditional ‘right-click to attack’, units can be ordered to advance at different speeds, in varying formations, or to swing around the enemy in graceful mouse-drawn arcs.

Arguably the most critical order the player can issue relates to battle formations and unit types. Do you prefer defense or offense, does the moment call for speed or disciplined advance? Accurately reading and predicting the flow of battle, and subsequently re-positioning your forces is crucial to victory, especially when playing on harder difficulty levels.

Outside of movement an obvious but often overlooked detail relates to unit types. Inexperienced gamers might be prone to throw caution to the wind and storm the enemy in a sudden outburst of finger-twitching fury, not caring if they just sent their cavalry charging at a ten person deep wall of spears. Pro-tip: don’t do this. As with virtually any strategy game (or games in general come to think of it), unit types play a big role, and learning a specific units’ strengths and weaknesses will take you a long way towards pre-medieval glory. 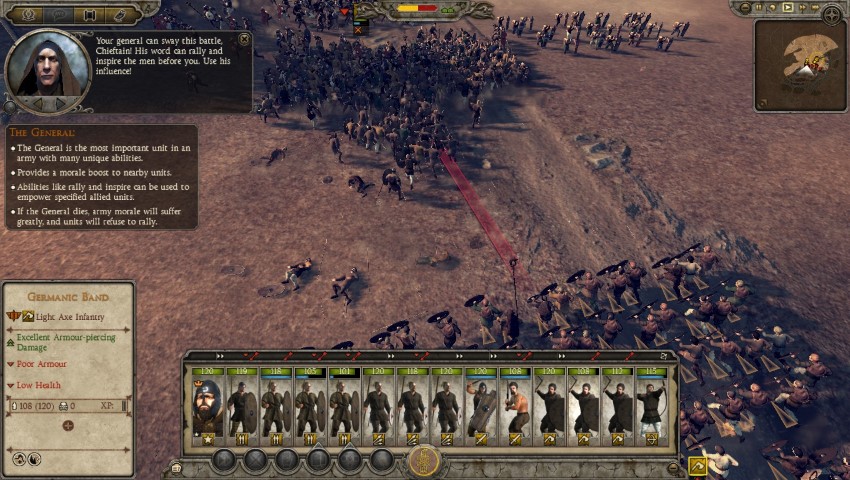 The Total War series has always prided itself in its ability to render large masses of troops in real time, and Attila is no different. In addition to the massive world map of the grand campaign (stretching from the Russian Steppe to the heart of antiquity), the game also allows players to command thousands of soldiers in realistic recreations of large scale battles.

Keeping this in mind, if you’re planning on playing the game at its highest settings your old work notebook is probably not going to cut the cake. This doesn’t mean it’s the next Crysis however, and your everyday gaming PC should be more than enough to handle the game, even if everything isn’t set to max.

Getting back to basics, the game looks good, but don’t expect every single solider to look like a character from Skyrim. The game looks great for its scale, and it really shows in the environments and epic vistas that become available when zooming around the map. Outside of the occasional graphical hiccup, the only issue we had was the game warning us about “low video memory”, and then promptly forgetting about it, so... yay? 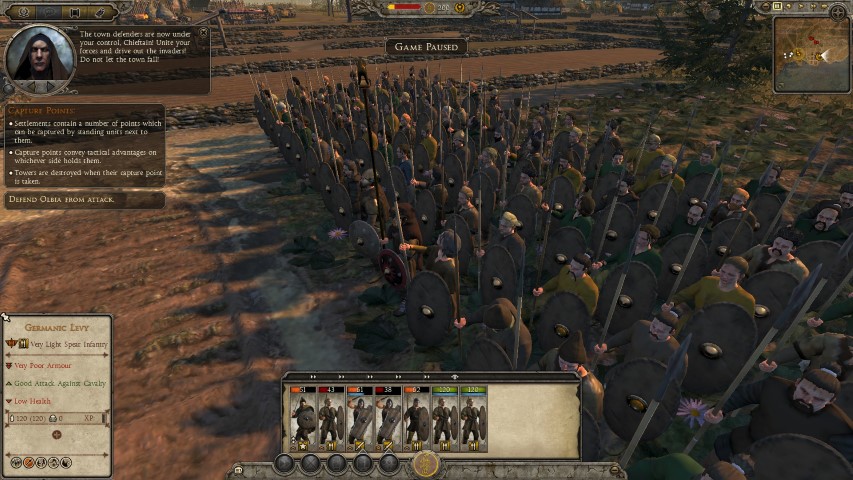 And the war ends

A fine addition to the Total War saga. The sheer depth and amount of stuff to do in this game is hard to convey in words. The GUI might not be perfect, battles might become a bit repetitive sometimes, but Attila is so much more; it is governance, a massive campaign, intricate noble family trees, promotions and demotions, famine and failed harvests, disease-ridden docks and naval battles. It might take a few hours, but trust us, if any of this sounds fun to you then Total War: Attila will definitely pull you in.

While not revolutionary, the title builds on the lessons of Rome II and continues being a fine strategy title for any gamer and/or history buff to pick up, regardless if this is your first attempt at placating Eurasia or not.