One of the more anticipated PS4 exclusives, Bloodborne, has finally arrived. Is this the standout new IP we’ve been waiting for?

Let’s make no bones about it – the hopes for Bloodborne have been sky high, and to a certain extent, understandably so. The main reason for this is that the developers, From Software, are the same ones that brought us the excellent, tough as nails and hardcore Dark Souls (review) games. Clearly, they know how to craft an atmospheric, compelling title that takes no prisoners, but the question on the minds of many has been if Bloodborne can actually surpass that vaunted franchise? More importantly, you may also be curious as to whether Bloodborne can successfully cleave your time away from that other luminary new IP debuting this year, Dying Light (review).

Before you can answer those questions, there is a frightful 2.8 GB patch that you absolutely must download and install right off the bat. Along with being required for the game’s online component, this apparently also fixes some graphical issues (perhaps why I found few if any glitches to complain about). 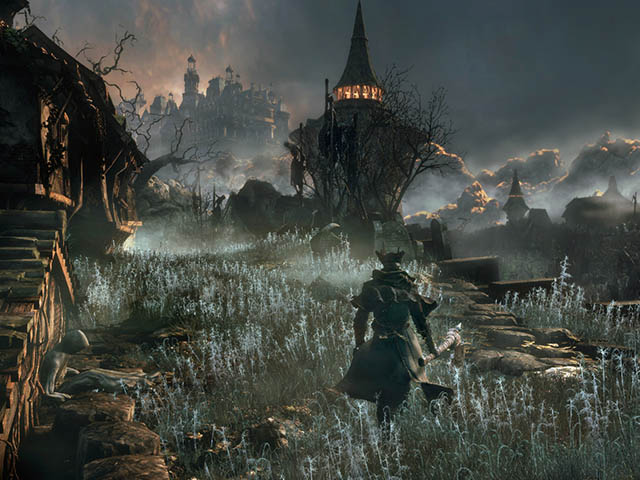 All his life, Carl had been warned away from blind dates. Finally, he decided to throw caution to the wind. Surely the horror stories were wrong. After all, what's the worst that could happen?

Where angels fear to tread

Beyond that, in the interest of putting you out of your misery, I can say this: Bloodborne is absolutely fantastic.

Playing like a Lovecraftian horror from the outset, the game oozes atmosphere and character from every pore, dripping with distinctiveness, found in its environments and creatures alike. Graphically, it’s simply stunning, and along with superbly evocative sound effects drew me into its twisted, plague-beset world in the first ten minutes. It has lived up to the promise of a new IP, bringing an exquisitely realised world that offers an engaging gaming experience.

Much like Dark Souls, Bloodborne’s story is sparse from the outset, with you awakening in Yharnam, a town beset by a creeping plague that causes sickness, and worse - much worse -  to the town’s residents. Hints as to why you are here and what exactly your tenuous situation is can be found if you search for them, although the disturbing religious undertones (think frighteningly deranged cults) are as apparent as the achingly detailed gothic architecture. Suffice to say, and without spoiling anything, the only way out of your sticky predicament is to hunt down and slay the beasts that now roam the world.

This of course, is easier said than done. As in Dark Souls, the foes you face are very often stronger, faster, or considerably bigger than you. They are keen reminders that you are a comparatively puny mortal who can – and will – die by their hands/claws/teeth at a moment’s notice. 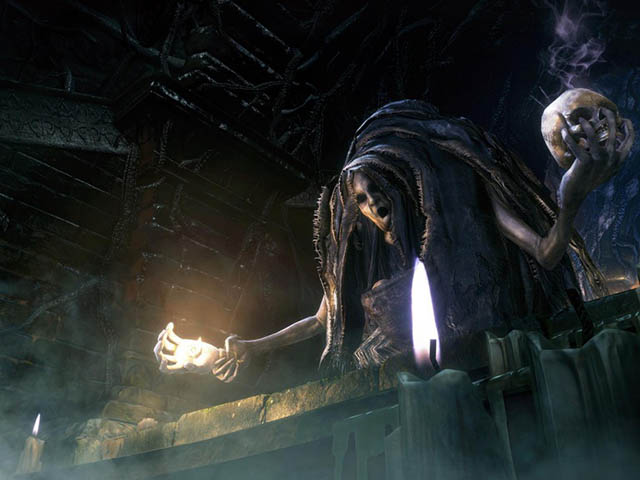 In hindsight, he realised he should have taken notice when his date insisted he meet the family first. Admittedly, Annie's mom was a little strange, but then, every family has a skeleton or two in the closet, he reasoned.

Challenging gameplay that requires you to use your head and not just your wickedly sharp weapons is not the only From Software staple that has migrated into Bloodborne. So too has the ability to share messengers with other players, or receive their hints and clues as to how to proceed.

Serving as save points are Lanterns that you need to find and light within the game, so taking the time to seek them out is highly recommended. Using these enables you to also return to the game’s hub world, aptly named the Hunter’s Dream. This not only offers a respite from a challenging foe, but it also enables you to replenish or fortify your weapons and buy or sell consumables, which if my experience is any indication, you will need plenty of.

Another thing you will need an abundant supply of, is perseverance. It takes a few tries to learn the weaknesses of Bloodborne’s denizens, and which tactics in combat will score you a win rather than showing you the familiar ‘You Died!’ screen yet again. It’s not quite as punishing as Dark Souls though, but having said that, it’s a bit more accessible for those who don’t necessarily need a masochistic difficulty level in their games either. 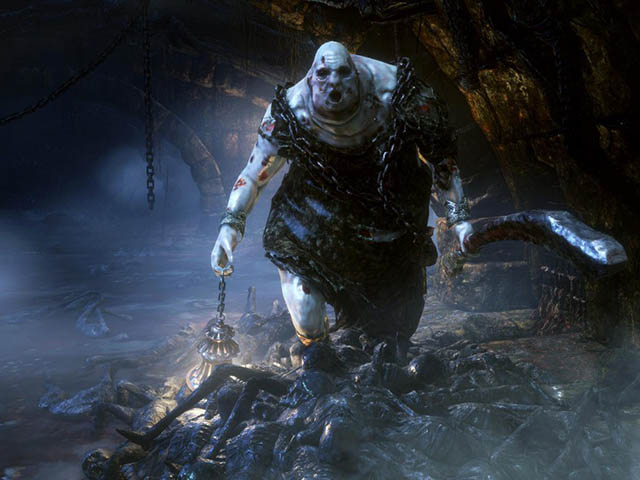 Apparently Annie's brother was not the friendly type.

In case you played the limited alpha and were concerned about the game’s seemingly lumbering mechanics, you need not fear, at least on that front. You don’t necessarily have to wield slow weapons, and movement in combat can be as fast you can hit circle to jump and roll. Speaking of this, evasion is a critical tactic, without it, you will die, and you will do so often and unnecessarily.

However, what Bloodborne successfully carries over from Dark Souls is the sense of accomplishment when defeating a particularly tough foe. However, here is the kicker, caution will serve you well, but also necessary is boldness, as striking foes plays a part in replenishing your health. The latter is something that can diminish startlingly quickly, especially at the end of that seemingly hulking brute wielding an impossibly large axe. 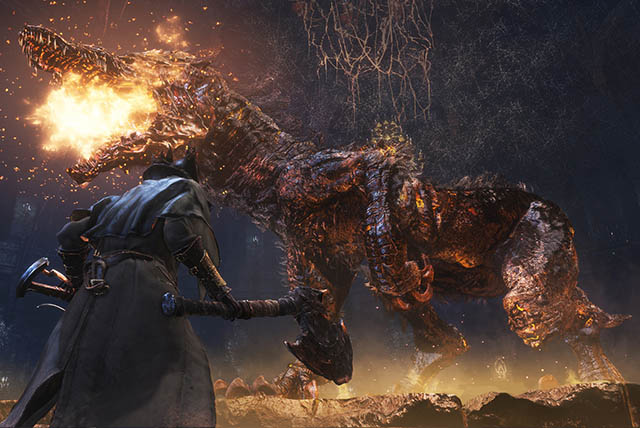 As for the family pet, Carl had expected a dog or a cat. Maybe a hamster. Now he understood why she had looked at him oddly when he suggested they have a braai.

Helping survive encounters such as these are both melee weapons and ranged ones, with the likes of axes, canes and what looks like an oversized meat cleaver serving you when you get up close and personal. Pistols, rifle or a blunderbuss, amongst others, aid you when you need to inflict damage from a distance.

These are mapped to your left and right hands in the game (or R1 and L1 respectively), enabling you to vary how you dispatch the monstrosities Bloodborne loves to send your way, or, as I came to refer to it, Edgar Allan Poe’s idea of speed-dating.

Admittedly, there is plenty more to say about the game, and no doubt, as it becomes available and with more players participating, it will well merit a revisit. However, right out the gate, Bloodborne is bloody fantastic.

If you have a PS4 and love survival/horror/action titles that grip you from the get-go, then it’s all too easy (possibly one of the few times that word and Bloodborne can be used in the same breath) to recommend to pick this one up. RRP: R800 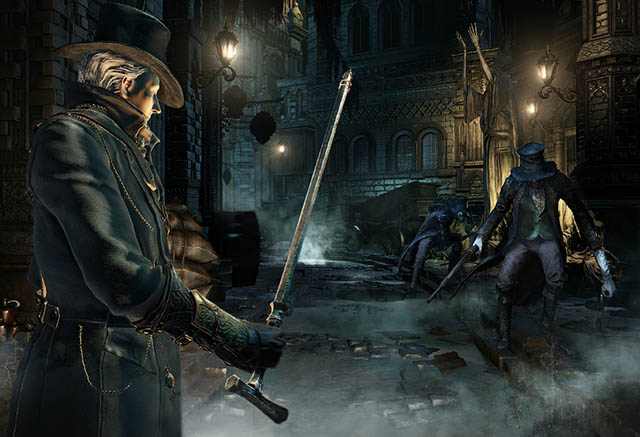 Perhaps the creepiest part of the evening came when Annie's father challenged Carl to a "friendly duel." That was definitely his last blind date - ever.

Best bit: Venturing deeper into the world after besting some particularly tough foes.