Assassin's Creed Brotherhood sees players once again strapping on the renaissance boots of Ezio Auditore as he tries to defend the world from the insidious Templar order.

Taking place directly after Assassin's Creed II, the game may not be the best for newcomers to pick up as far as story is concerned, but with its rich and fluid gameplay and impressive multiplayer features, Brotherhood can find appeal in almost any gamer.
Story
The story starts as Ezio returns to the villa in Monteriggioni, your base in the second game, for a well deserved break. Of course events does not unfold as serenely as planned as Cesare Borgia, the son of Rodrigo Borgia (the second game's antagonist), shows up and devastatingly attacks the villa.
With the villa, an important artifact and several allies lost in the battle, Ezio is left virtually on his own again as he returns to Rome to start exacting revenge on the Borgia order. Of course, as any Assassin's Creed veteran will know, throughout the game players actually take on the role of Desmond Miles, a distant relative of Ezio as he relives Ezio’s memories using a device known as the animus. Desmond lives in our time (or in 2012 at least), and a few missions see you taking control of him directly, usually for some puzzle-based jumping sequences. The ending sequence also features Desmond, but we'll leave those details for you to uncover. 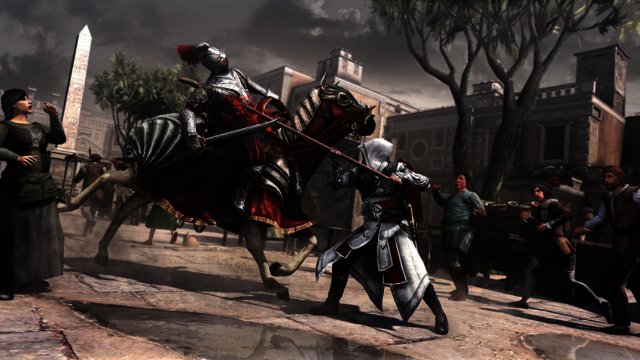 Presentation
Brotherhood is definitely a beautiful beast, with expansive renaissance vistas and intricately detailed pieces of historic architecture to explore. A couple of times we found ourselves simply stopping to admire the scenery from one of Rome's many vantage points. Be it the sun glinting off a passing horseman's armour to the dramatically explosive firing of rudimentary cannons, the game is worthy of tons of graphical praise.
The entire city of Rome is detailed beyond imagination. Old time players may have gotten used to impressive locations in Jerusalem and Venice, but they're nothing compared to the majesty of Rome. From scaling the crumbling walls of the Colosseum to witnessing the emergence of renaissance culture in the city, everything is presented in a colourful and vibrant light. And don't think historical accuracy has been shunned in this modern-day remake, for every new area or important building you explore the game will provide an informative entry regarding its inception and history.
Sound in the game also felt natural and was largely an impressive affair. The soundtrack keeps a tight rein on the action while realistic environmental sounds (the clanging of swords or the clattering of hoofs) keeps you concentrated on the action at hand. The voice acting was generally done well but we did find the heavy Italian accents on some characters to become a little over-exaggerated as the game wore on. 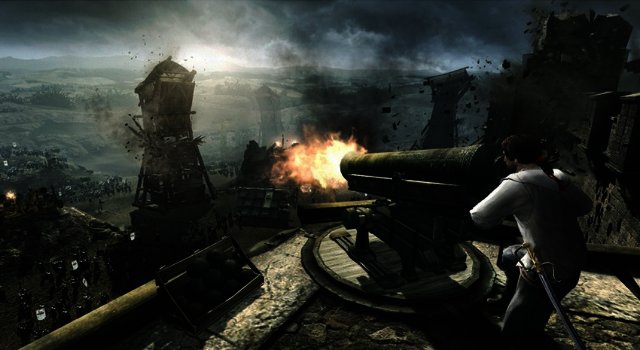 Gameplay
Brotherhood’s standard gameplay shares a ton of features with ACII, with movement and basic attacks staying generally the same, although Ubisoft Montreal did add a couple of new touches. Still, most of the single player campaign will have you fulfilling assassination contracts and the like in a similar fashion to previous games.
As players explore the vast city of Rome they will find that the Borgia has divided it into different districts, each controlled by a Borgia tower and each influencing that particular area by making shops inaccessible and having an annoying number of guards patrolling the streets around it. The first step in liberating the city from Borgia rule is to destroy these towers. Players do this by assassinating the captain commanding each tower (obviously a lot more difficult than it sounds) and then scaling the tower with Ezio's ninja-like acrobatic skills to set it on fire.
Once the tower is destroyed players gain access to whatever businesses were operating in its shadows, from stables to blacksmiths and banks. Players can then renovate these shops to give Ezio an increased amount of income as he continues on his crusade.
Help is on the way
Brotherhood also introduces allied assassins to its single player campaign to help in the good fight. As you destroy Borgia towers assassin apprentice slots will open up, allowing the player to rescue and recruit an ordinary citizen from the streets of Rome, turning him or her into an allied assassin. These assassins can be called on by targeting an enemy and pressing the left trigger, they will then attack the target in different ways, ranging from riding up on horseback to dropping down from the rafters, depending on the location and their skill.
Your assassins will gain experience by being sent on missions throughout Europe, earning both XP and some extra gold. Assassins will also unlock new abilities as they progress, but it must be noted that they can die, so try not to send them on any overly suicidal missions. The ability to call in help in both dire situations and just to finish off a target more efficiently is a great addition to the game, and for the first time ever you feel like you aren’t going up against an unstoppable force on your own.
As in ACII, famed Italian inventor Leonardo da Vinci makes an appearance in Brotherhood, Ezio with some advanced weaponry including a horse mounted chain gun and enjoyable paraglider. These missions add something a bit different from the standard fare, as Ezio strives to keep his inventions out of the hands of the Borgia. 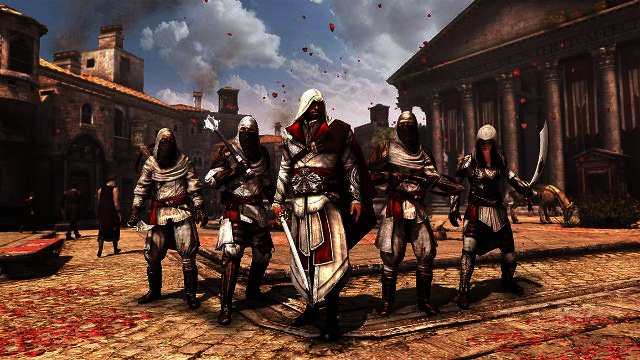 Combat
Players can expect all the sneaky gadgets they've come to love in previous Assassin's Creed games, including all manner of hidden blades and original ways of dispatching enemies. New weapons such as the crossbow and more gunpowder focused contraptions also comes in handy.
Combat is a fluid affair, with Ezio able to execute some mighty impressive combo's if you can nail the correct buttons at the right times. In addition to dodging and blocking, players can now also kick guards to expose a momentary opening. Using Ezio's trusty new hidden pistol to deliver the finishing blow after slashing your enemies apart makes for a highly rewarding new experience.
The controls does take a little getting used to, so don't expect to be the number one assassin right off the bat. We also thought some of the controls were a tad on the inaccurate side, especially the lock-on system, as Ezio will sometimes lunge at opponents only to have his blade stab embarrisingly at a patch of air between two enemies.
Multiplayer
One of Brotherhood's biggest selling points, or perhaps its main selling point, is the inclusion of online multiplayer, a first for the Assassin's Creed series. In Brotherhood's online mode players take on the role of Abstergo agents (modern day Templars) as they are placed inside an animus to practice killing assassins.
The loose storyline doesn't really matter though, and in the end it all comes down to finding (and killing) your target while simultaneously avoiding those hunting for you. The radar gives players a general indication of where their target is, but once you're close it will be up to you and your deductive skills to spot the target. A throng of NPC's crowd the streets, taking on the identities of you and the other players in an attempt to confuse you.
It may be tempting to dash onto the rooftops to try and challenge your opponent to a one-on-one battle, but the truly crafty assassin waits for the kill, approaching slowly and silently. The game also awards a higher score for an undetected assassination. Thus a lot of multiplayer time will be spent blending into the crowd and watching for the tell-tale movements of a human player, a sudden misstep, sudden changes in direction, and of course the overzealous players dashing madly on the above mentioned rooftops.
Four modes are available in multiplayer including Wanted and Advance Wanted, two versions of free-for-all modes and Alliance and Manhunt, which are team orientated modes. In Alliance pairs of players hunt for their targets together and in Manhunt everyone is divided into two teams, with one team having to hide and the other having to search for them.
Staying undetected is the key to success in almost all of these modes. While it may not appeal to the average FPS fanboy's thirst for non-stop action, we found Brotherhood's multiplayer to be a very different yet very enjoyable affair. A variety of different classes and abilities are also available in multiplayer as you level your way up. 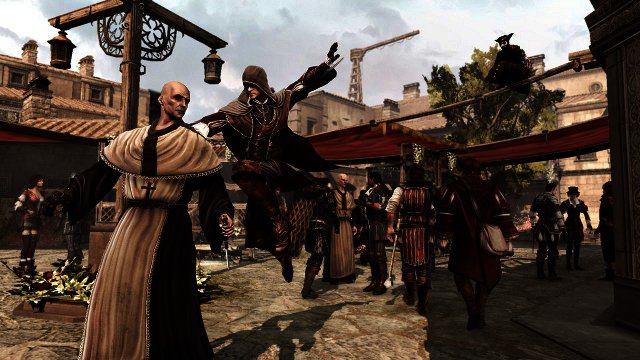 Conclusion
Assassin's Creed Brotherhood is a welcome addition to the franchise and features a rich and highly detailed story and world which fits perfectly into the Assassin's Creed mythos. The addition of multiplayer options also ensures that the title doesn't stand on the shelf collecting dust after you've finished the single player campaign. All in all, a worthy addition and a great game, complementing its unique action/stealth/platformer genre.

PROS
Multiplayer, lots of new weapons and the largest city to explore yet.