It took me five minutes to really like Synology’s DiskStation. Why so quick, you may ask? Because the installation of two SATA hard drives into the unit took just that long. Snapping a new drive into the bay was a breeze, requiring neither a screwdriver nor screws.

Within minutes, a couple of hard drives that I had laying around gathering dust were ready to be used for a far better purpose of storing media files and backing up important data.

To my mind, those are the primary two uses I would envision many users turning to the DiskStation network attached storage (NAS) device for. here are, however, a couple of caveats that have to be mentioned.

First, the DiskStation does not come with any hard drives out of the box, and that is going to be an additional expense that you need to factor in. As well, you would need to have already purchased a drive to get usage of the device right away. To be frank, I would have loved to have seen at least one drive included, with the operating system already installed and everything ready to go from the outset. 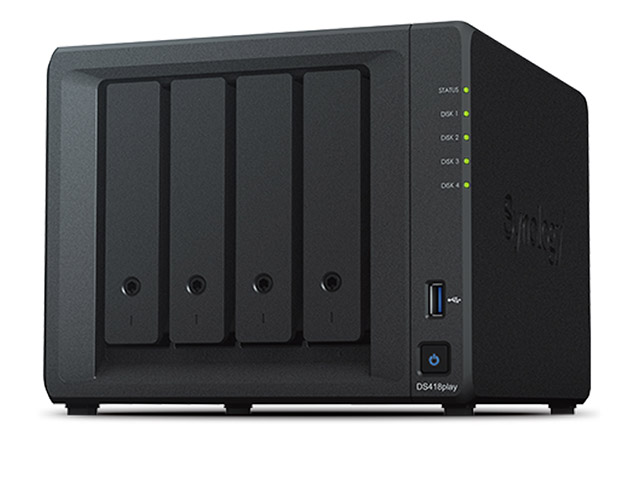 Getting ready to go

Secondly, while the installation of hard drives is a snap, there is a bit more complexity involved on the software side of things, with an operating system to install, and then some software configuration to do as well, whether from a browser or from a downloadable app.

I found this to be the most complex part of the DiskStation’s setup, although, to Synology’s credit, there are some very good walkthrough videos online to assist. You are going to want to  set aside some time to get everything up and running though.

Once you do though, you have a Windows-like interface at your disposal to which you can drag and drop files, download a variety of apps, and search across all the files stored on your device.

Show me a movie

On the media side, you will likely want to take advantage of Synology’s Video Station, Audio Station, and Photo Station apps, with which the device readily serving as a media server, offering streaming of 4K video and music. It’s a nifty solution, especially for large families who have their own video/music libraries and want to share them from a centralised source. Speaking of which, particular file permissions can be set for each user, and thus who can view what content is something that can be easily managed.

A variety of applications extend the DiskStation’s usefulness beyond media storage, which incidentally are well worth downloading and installing. These include Active Backup for Business, which enables you to protect and backup data stored on personal computers, and Cloud Station Backup which allows you to backup your files from several different computers to your NAS. 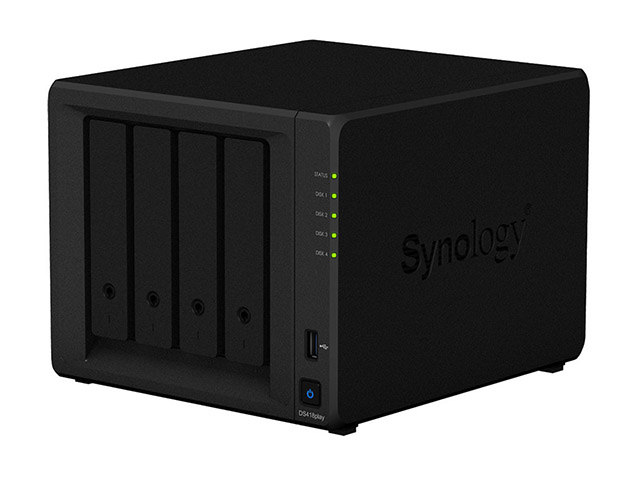 Getting down to business

Another application well worth installing is Cloud Station Drive.With this, you can synchronise files between your Synology NAS and PCs via the internet, so as to ensure that your data is always up-to-date. Additionally, the same application allows you to view and edit files offline, with any changes being synced when an internet connection is restored.

The prime use of that feature that came to mind is that of ransomware protection. Indeed, one of the better ways to stave off that particular scourge is having up to date versions of your important files on a separate location to your PC. Should you be hit with ransomware, which encrypts your files and can only be unlocked by paying up a groan inducing amount of Bitcoins, at least you can tell the attacker to go jump and instead revert to your uninfected files on a NAS for example. For small to medium businesses, this feature alone may well make the device a worthy investment.

That actually only scratches the surface of what the NAS can offer up. With more than 100 apps available, there is a great deal that this little cube can be empowered to do. Much of it though does centre around data backup and security (no complaints there), business orientated usage and entertainment offerings. Although I did not venture into it, for those who are technically inclined, the device also supports RAID.

Appearance wise, the DiskStation looks like a solid black cube, with the four bays being the most noticeable on the front of the device. Other than that, you get a USB port, ethernet port to connect to your router and just four discrete LEDs that light up when each drive is successfully installed. It’s certainly inconspicuous externally.

Internally, though, there is a 2 GHz dual core CPU and 2 GB of RAM doing duty, and, depending on the disk sizes, you can equip up to 48 TB worth of hard drive space. This would no doubt keep even the most prolific movie or music collector happy with no storage shortages for quite some time. Finally, the device offers up two USB 3.0 ports, one on the front and a second on the rear.

Is it for you?

Admittedly, the cloud and the prolific use of streaming services like Netflix may well leave you wondering whether you need a NAS solution at all. The answer is: it depends. If you already have a large library of media that you want ready access to, or are heavily into content creation, perhaps selling your own video content that you want to store locally, then having a NAS certainly makes sense.

If you are a business owner, small or large, looking for another way to protect and backup mission critical data, that you want to have access to at all times, then it becomes a viable tool in the fight to keep your data safe from cybercriminals, and an even more attractive proposition to add to your arsenal.

The only downside to the device really is that it does not come cheap – anywhere between R 7 200 and R7 600 online, depending on where you shop.