They say all roads lead to Rome. In the case of the majority of Marvel movie releases the past few years, all roads seem to have led to The Avengers. As separate entities, Thor, The Incredible Hulk, Captain America and Iron Man, were certainly entertaining (the two Iron Man movies maybe more so than the rest), but lacked a certain “OOOMPHHHH!!!!”. Bring these guys together and it’s a completely different ballgame.

The Avengers, in short, is the best movie coming from the Marvel stable yet. The majority of credit needs to go to director and writer, Joss Whedon. Known as a comic book lover and well respected in the geek community for the jobs he did with Firefly and Serenity, Whedon manages to spin a fine yarn out of what could have very easily have been a multiple personality disorder of characters. 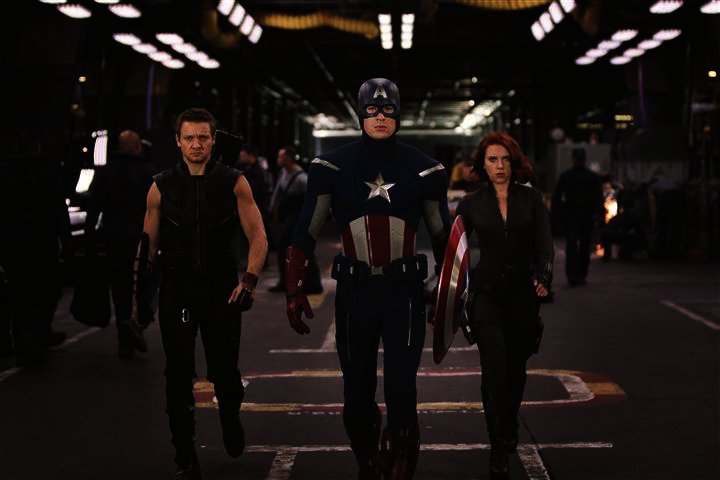 The Avengers doing their Reservois Dogs impersonation
We can be heroes
You can’t get much bigger than Iron Man, Thor, Captain America, Hawkeye and Black Widow lining up for a fight (rumours of possible Justice League movie not included). Throw in The Incredible Hulk and you have yourself a gang that should rather stay away from the next Tiffany auction.
The story could have been inconsequential – a powerful force (Loki, a Cosmic Cube and an alien army) threatens the earth, cue The Avengers. However, the way Whedon picks his way through the separate hero’s movies and beautifully weaves it together deserves a nod.
You can very easily be forgiven for thinking that the previous movies were nothing but prequels to The Avengers, since parts of the plot all come from what we’ve seen previously. Maybe more so from Thor, since Asgard’s problems once again spill over to earth. Loki is still lusting after power, and seems to have struck the perfect deal with an aggressive alien species. The result of this unholy matrimony has devastating consequences for life on on our blue planet.
All together now
With the earth under threat, it’s the task of Nick Fury (Samuel L. Jackson doing what he does best – being really authoritative), the director of the international peace-keeping force S.H.I.E.L.D, to bring together this group of super-egos. Out of these none is bigger than the eccentric Tony Stark/ Iron Man, brilliantly portrayed as always by Robert Downey Jr. Unlike Iron Man 2, the character never gets away from us, being brilliantly reined in by Whedon. In fact none of the characters dominate, and none totally left us cold.
The recently unfrozen Captain America’s (Chris Evans) stoic behavior reflects his Second World War past, while Thor (Chris Hemsworth) is much better in small helpings than in his previous full length buffet outing (although gathering from the reaction from the female members of the audience, eating sushi off his naked chest did not seem out of the question). Mark Ruffalo’s depiction of the “can-or-can’t-reign-in-the-Big-Green-Guy” Dr. Bruce Banner was one of our favourites, and The Incredible Hulk is an absolute scene stealer. 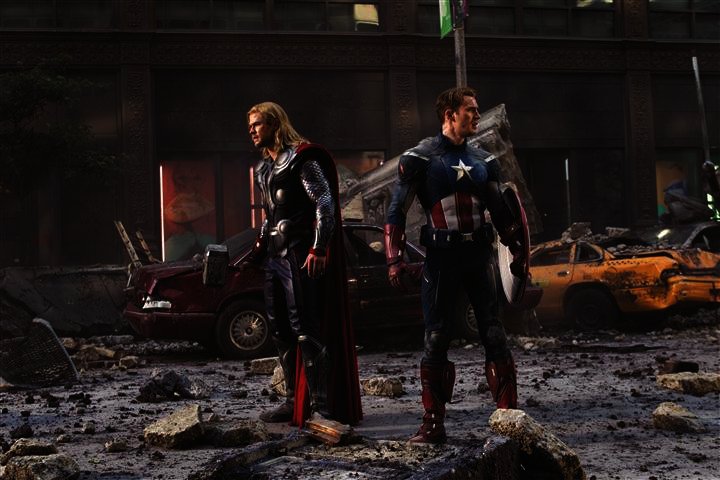 The nasty after effects of The Hulk's flatulence
The two lesser known heroes include the arrow-wielding Hawkeye (Jeremy Renner with yet another brooding performance) and Black Widow, played by a slightly dull Scarlett Johansson.
We had our reservations about Black Widow, but eventually she won us over by simply being not as irritating as expected. That said, her pistols looked completely out of sorts next to Thor’s Mjölnir for example (for that matter, Hawkeye’s arrows don’t compete well either). Even though The Avengers does action extremely well, any romantic notions are almost non-existent, since the simmering sexual tension between Hawkeye and Black Widow is more reminiscent of cold mushy pea soup than steamy, hot blooded passion.
Finally, Tom Hiddleston is well suited for the role of the overconfident Loki. Loki unfortunately does not quite cut it as an arch villain, rather that of the Trickster god that he is. Despite all his evil threats and notions, in conflict with his older brother Thor, the poor Loki unfortunately never seems more than one donkey-bite away from spilling the beans.
To the point
The Avengers feels much more like an old fashioned comic book than a serious graphic novel, the likes of The Dark Knight or Watchmen, with lots of panels of bravery, bonding, intrigue, mayhem, unexpected humour and lots of KAPOW! Whedon had us fixated up until the last second of the final battle, with Iron Man’s part of the clash, we thought, even channelling the ghost of Stanley Kubrick.
Earlier this year we listed The Avengers as one of the top 5 anticipated movies of the year, and it certainly does this more than justice. We do foresee one big problem, how is Marvel going to top this?
We forgot to mention to not waste your money to see this in 3D - you'll enjoy it more without the glassed and with better brightness.

PROS
Joss Whedon does an excellent job with both the script and directing. The whole is definitely greater than the sum of its parts.

CONS
Not much, although Black Widow disappoints slightly. The main aliens are also a bit too camp for our liking.
TAGS:
The AvengersmoviesJoss Whedon
USER COMMENTS