Research In Motion (RIM) hasn’t taken a step in a Bold (excuse the pun) new direction with the new 9780. Instead the Canadian smartphone manufacturer has enhanced what was good with the old Bold 9700 and addressed its issues.
Same old, same old in terms of design
Upon glancing at the new Bold, it becomes clear that RIM didn’t book it in for cosmetic surgery. The 9780 boasts the exact same dimensions (109 x 60 x 14 mm), weight (122 g), display size (2.44") as well as resolution (480 x 360) of the Bold 9700. You’ll find the same quality construction, while it’s virtually a twin of the older one. The only noticeable alteration being the Bold 9700’s silver chrome edging, has now been painted black.
On the old Bold the silver edging made for a nice contrast against the all black design of the device, and also gave it a more premium look compared to the rest of the range. This chrome strip, however, is privy to being easily chipped or dented if the phone was dropped though.
Another change is the keyboard that still looks the same but is noticeably softer to type with, and even though the screen has the same resolution images, webpages and the like appear noticeably crisper on the Bold 9780’s display.
Under the Canadian hood
Like the enhanced display quality, the camera employed in the new Bold is an upgraded 5 MP snapper with auto-focus, geo-tagging and LED flash. It takes above average quality photos, especially when selecting the appropriate scene mode such as landscape, up-close and face-detection. Videos too are recorded at a good quality, although HD-ready (720p) video-recording isn’t offered, as is the case on some other devices such as Nokia’s N8 and Sony Ericsson’s Vivaz pro.
The Bold 9780 is powered by the same 624 MHz processor as its predecessor, but boasts double the amount of RAM (512 MB) as well as available storage (also half a gigabyte) as the Bold 9700. The latter can be boosted to 32 GB with the inclusion of a microSD memory card, with a 2 GB coming with in the retail box.
RIM’s BlackBerry Bold 9780 also offers GPS with aGPS support, a document editor for Office files, Wi-Fi 802.11 b/g, 3G HSDPA and a very good battery life of around three days. 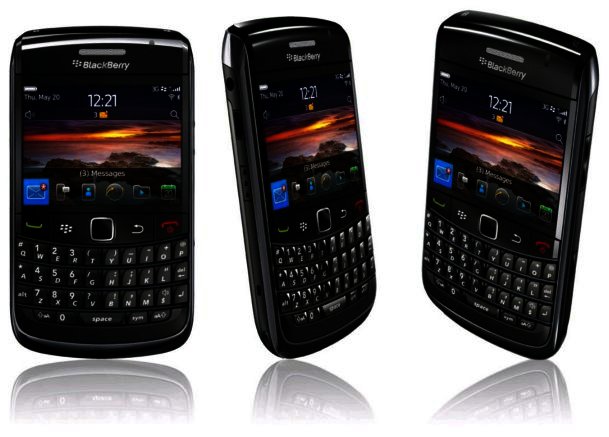 BlackBerry OS 6
With all the minor hardware and design alterations, the device’s biggest change has come in terms of its software. Like the BlackBerry Torch 9800, this phone runs on BlackBerry operating system (OS) 6.
The company’s new mobile OS sports a completely redesigned User Interface (UI) which incorporates features the likes of universal search and integrated social feeds from a number of networks including Twitter, Facebook and BlackBerry Messenger.
There is also a new WebKit browser, featuring tabbed browsing and faster page rendering allowing for a much improved browsing experience, even if you still have to do a bit of scrolling about with the touchpad.
Like the Android mobile OS and more recently Nokia’s Symbian^3 (on devices like the C7), BlackBerry OS 6 also features some good looking, animated menu transitions. It also boasts an improved music player, enabling users to more easily navigate through their music selections, by flicking through track- as well as album selections using the touchpad for example.
Final word
RIM hasn’t redesigned the smartphone wheel with its Bold 9780 and has basically just chipped away the rough edges of its older model. It features some hardware improvements as well as RIM’s latest OS, which should keep BlackBerry fans happy and garner the company a lot of interest from new users.
Will it wrestle users away from Android and iOS users though? We don’t think so. Is an upgrade in order? If RIM brought the touch and type integration (expected to be available on the next Bold version) to this device, a contract upgrade would have been much more justifiable.
You can pick one up for a selling price ranging between R4499 and R4699.
Pro
New OS is a lot better to use than the one on the previous Bold, better performance and camera.
Con
Not many changes in terms of hardware and virtually identical styling to the old model, no FM radio, no touch-screen.

PROS
New OS is a lot better to use than the one on the previous Bold, better performance and camera.

CONS
Not many changes in terms of hardware and virtually identical styling to the old model, no FM radio, no touch-screen.
TAGS:
BlackBerryRIMsmartphoneBlackBerry OS 6
USER COMMENTS