It might be old news now that Nokia has formed a partnership with Microsoft, which sees the Finnish manufacturer adopting Windows Phone OS as its primary smartphone operating system (OS) in the future. In the meantime though, it’s still releasing many new devices running its Symbian^3 OS, including the latest Nokia Communicator, the E7, which follows in the wake of the N8 and C7.
Design
The first thing that grabs you is the look of the E7. Like the N97 and N97 mini before it, it sports a slide-out QWERTY keyboard, but unlike those bulkier devices this smartphone implements the high-end slim design of the N8. Its keyboard (with the spacebar positioned in the middle, as opposed to the N97 mini’s funny right aligned placement) is easy on the fingers and we found usability better than on the N97 mini (the HTC Desire Z still holds the crown for best QWERTY keyboard).
This E7 is enveloped in an aluminium shell which makes it feel rock solid and very modern, emulating the chic feel of a unibody MacBook Pro. As expected it sports a longer and wider frame (123.7 x 62.4 x 13.6 mm, weighs 176 g) than the N8 (113.5 x 59.1 x 12.9 mm, 135 g), but it still manages to fit quite snugly in your hand or pocket.
This chic styling has come at a price though, since the E7’s a unibody design does not allow you to remove the battery of the device, much like the Apple iPhone. 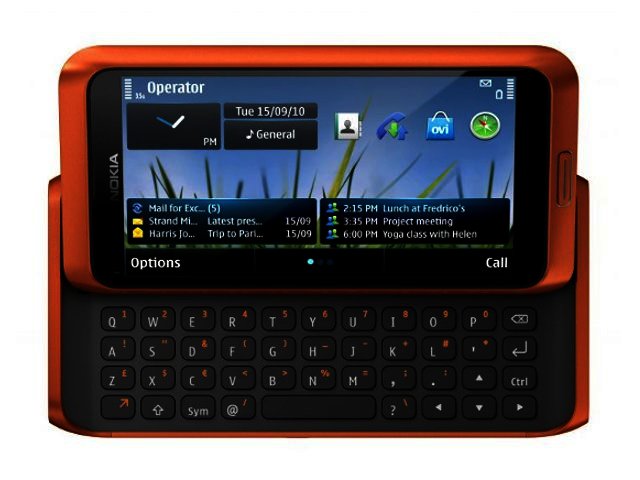 Screen
As with the spacebar on the keyboard, the device’s menu button has luckily also been moved from the left side of the phone (where it’s placed on the N8) to the more logical central position, right underneath the touch-screen. Talking of which, the E7 boasts Nokia’s largest touch-enabled display, coming in at a very decent 4", but unfortunately sports the same resolution (360 x 640 pixels) of the N8 and C7’s 3.5" AMOLED capacitive display. This also doesn’t quite match the resolution (640 x 960 pixels) of the iPhone 4’s retina display or that (480 x 800) of a crop of mid-to high range Android-powered devices such as the HTC Desire Z.
A noteworthy element to the Nokia’s display is the fact that it’s a ClearBlack screen. The Finnish manufacturer’s ClearBlack technology reduces reflections on the display, allowing for better visibility in general, but more importantly improving the outdoor visual image quality. This means that if you take your E7 outside and employ it in the direct sunlight, it is a lot less susceptible to glare. So you’ll be seeing the phone’s menu system as opposed to your own reflection staring back at you.
Camera
Most Nokia phones have excellent cameras and the E7 is no exception, employing (as is the case with the C7) an 8 MP camera with fixed focus and dual-LED flash. It takes very good stills and, like the N8’s 12 MP snapper, can record high-definition (720p, HD-Ready) video that looks equally good.
You can also edit your photos and videos with a bunch of onboard functionality on offer. For editing photos for example you have red-eye reduction, rotating, cropping amongst others at your disposal, as well as adding fun elements such as giving your photo subject an egg-shaped head. Whilst text and images can be added to your videos, while your rearrange the recorded clips in order to produce your own movie staring your friends in HD for instance.
HDMI and connectivity
We really liked the fact that the E7 features HDMI out and comes with the cable in the box, allowing you to connect to your HDTV to effortlessly display all your HD-Ready videos and high-resolution photos on a bigger screen.
This smartphone boasts Integrated GPS and A-GPS receivers, with Nokia offering free life-time navigation via the excellent Ovi Maps navigation software. It also offers easy to setup 802.11n Wi-Fi, Bluetooth 3.0, 3G HSDPA, Quickoffice for viewing and editing Microsoft Office documents on the go and 16 GB of internal storage space.
Unlike the N8, the E7 doesn’t allow you to expand on this storage via a microSD memory card, as it doesn’t sport such a slot. It does however have USB-On-The-Go (with the micro-USB to USB cable included), enabling you to transfer files, videos and movies quickly from your USB to your smartphone. You can even watch a movie or a TV series on your E7 directly from your memory stick without any lag.
Battery life is also very good (for a smartphone) at over two days of use, unless of course you need to update the firmware or abuse your work’s Wi-Fi enabled network to download a plethora of apps, in which case it will drop significantly to way under a day. 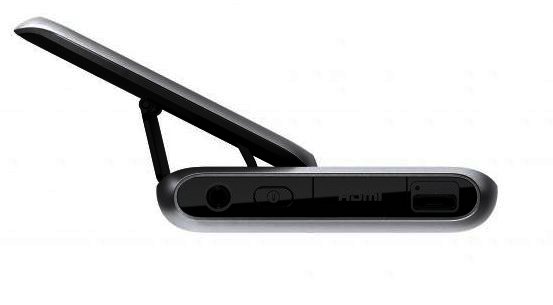 Symbian^3
Really impressive on the hardware front then, but how does its Symbian^3 OS compare? The  three home-screens that can be easily edited and populated with widgets are of course less than Android’s seven, while the customisation also isn’t as versatile as on Android.
Android widgets come in a variety of shapes and sizes and you can freely place them where you want to, whereas Symbian^3 lets you place up to six widgets per home-screen that all fit into the same rectangular mould. We also don’t like the look of Symbian^3 - it reminds too much Symbian Series 60 and simply does not match up to the sleekness of Apple’s iOS or Windows Phone 7.
Multitasking
Scrolling between the home-screens was lag-free, but not as fluid as on other more powerful devices we’ve tested, since the E7 sports a 680 MHz ARM 11 CPU and not one of the 1 GHz monsters you sometimes find.
Helping with multi-tasking is a visualised multi-task viewer that is accessed by holding the menu button. It shows you all the programs that are open and you can move in between them or close them directly from this menu.
Browsing and Social Networking
The default web browser doesn’t boast tabbed browsing (easily addressed by downloading Opera Mini), but like the E5’s browser it has a handy visually represented page history viewer, which provides you with snapshots of previously visited pages to scroll through and access.
Even though this is a touch-screen device, browsing isn’t much easier than on the non-touch-enabled E5, as navigating pages is still quite cumbersome. Pinch-to-zoom is nice for zooming in and out of pages, but you still do a lot of scrolling through pages since sites such as News24.com does not fit into the full screen.
Like Research In Motion’s BlackBerry 6 OS, S^3 also has integrated social networking, which allows for multiple feeds from a number of social platforms the likes of Twitter and Facebook to be integrated into a single Social Networking feed - but you have to have an OVI account (much like a Google account is required for Android and Windows Live for Windows Phone 7).
In a nutshell then, the Nokia’s hardware is really good, but its software can’t match that high standard. If it was a PC it would be a top of the line Alienware gaming rig running on Windows XP. Yes, XP is reliable and works with most things, but who wants to use it when Windows 7 is available? Luckily for Nokia fans (and yes we mean it) Windows Phone is coming to a Finnish smartphone near you soon.
Final word
Nokia’s E7 boasts some very impressive and useful hardware such as HDMI out, HD-video recording and USB-On-The-Go, but inevitably it’s let down by its operating system software.
Espoo has crafted a smartphone (hardware) gun, but supplied it with (software) duds. Is it a terrible mobile OS? Not by any means, but it’s simply not as good as its modern competitors the likes of iOS, Android and Windows Phone 7 OS.
The E7 goes for a recommended retail price of R5999.