Smartphones have become powerful and very capable mobile gaming devices, with some even challenging the established players in the mobile gaming arena (Apple’s iOS is the world’s most popular gaming platform). The Sony Ericsson Xperia Play (promo video posted below), its first PlayStation Certified device that looks like the lovechild of a smartphone and PSP Go.

The Android 2.3.3 (Gingerbread) operating Xperia Play’s design is quite similar to that of a run-of-the-mill Xperia range smartphone. Donning a stylish ivory and silver Clark Kent business suit, it measures 119 x 62 x 16 mm and weighs a noticeably chubby 175 g. This bulky (but comfortable to hold) exterior hints at the fact that there’s more to this device, and this becomes evident when you slide out its hidden PSP Go-esque gamepad from underneath the display, revealing its Superman gaming persona.

Keeping the performance Kryptonite, aka lag, at bay to delivering a super-smooth gaming performance, is the Play’s optimised Qualcomm Snapdragon MSM8255 system-on-a-chip, sporting a 1 GHz CPU and embedded Adreno 205 GPU graphics processor. This mobile processor is neither top of range nor unique though, since a lot of smartphone makers are employing the same SoC, including SE’s Xperia arc as well as in HTC’s Desire S.

None-the-less, this processor, along with the device’s 512 MB of RAM, delivers 60 frames per second 3D mobile gaming (although not viewable in 3D like the LG 3D P920), via the Play’s excellent 4" (480 x 854 pixels, 245 ppi pixel density) touchscreen. The high pixel count assists in ensuring that you have nicely saturated colours (though not as brilliant as on Samsung’s Super AMOLED screens) and the viewing angles were excellent as well. However, the pixel density (ppi count) on the display still doesn’t match that of the BlackBerry Bold 9900 (287 ppi), Nokia E6 (328 ppi) or iPhone 4 (326 ppi).

The Play will have access to PlayStation game content provided through the PlayStation Suite, which will be launched by Sony Computer Entertainment later this calendar year. Ensuring that you keep your gaming fingers occupied until then are six preloaded games, including Crash Bandicoot, Bruce Lee: Dragon Warrior and FIFA 10, with more games downloadable via Google’s Android Market.

The graphics on the Play can be compared to PS One titles, and we found the gaming experience smooth and the controls intuitive, as expected from a devices with a PS pedigree. However, we also wished that Sony could’ve squeezed in its mini analogue stick, which would’ve enabled better 360° movement within games such as FIFA 10. Sony have included two circular analogue touchpads, but these can be too sensitive and aren’t as precise as an analogue stick was on the PSP Go or on the normal PS3 or PS2 controller. 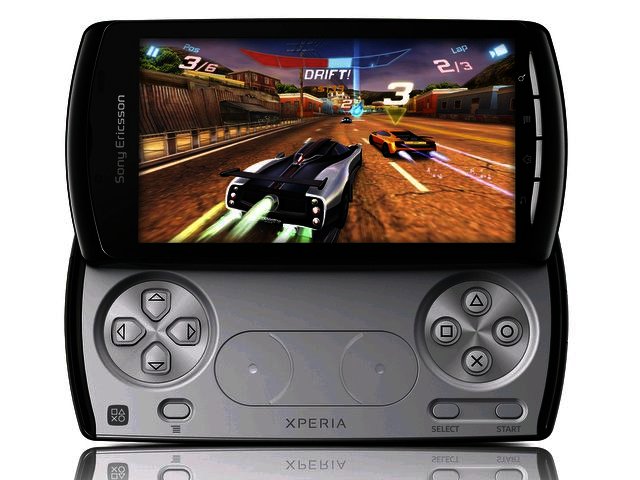 Also onboard is an auto-focus 5.1 MP camera that captures gorgeous looking photos, but strangely doesn’t record HD-Ready (720p) videos, as you have to settle for WVGA resolution. In contrast to the rear-facing camera, the front-facing snapper takes very pixelated pics and records grainy VGA video, but then again it is primarily there for video calling.

It also features GPS, Bluetooth 2.1 with A2DP, 802.11n Wi-Fi and only about 400 MB of internal storage space. Luckily you can expand this with the addition of a microSD memory card (supports cards up to 32 GB in size), with an 8 GB card included with the device.

Unlike SE’s Xperia arc, which boasts an HDMI port to display all your high-resolution photos and HD videos on your HD monitor or HDTV, SE have opted not to include this option on the Play. We would like to have seen it included, especially since that would have meant that you could connect this mobile gaming device to your HD display to enjoy the games on a larger screen. This is also the most likely reason why Sony Ericsson did not include this option on the Play, since neither the original PSP nor the PSP Go allows this.

The SE Xperia Play is a really capable smartphone and delivers an improved mobile gaming experience thanks to its dedicated controls. According to SE its Xperia Play is a phone first and portable gaming device second, but you’ll still be able to replace your old smartphone as well as a PSP with just one device. This privilege comes at a pricey R6000 though.