Star Trek Beyond is the third film in the latest iteration of Star Trek. The first two, Star Trek and Star Trek Into Darkness, were directed by J.J. Abrams, but since he's crossed over to the Star Wars camp with Star Wars: The Force Awakens, they've forced him to pick a side to keep peace on Earth. Star Trek Beyond was entrusted to Justin Lin, a director who has made a name for himself directing Fast and the Furious sequels, a series with a growing ensemble and big effects. Lin has shown his ability to wield the demands of an ever-broadening franchise, which probably made him a good choice for Star Trek. 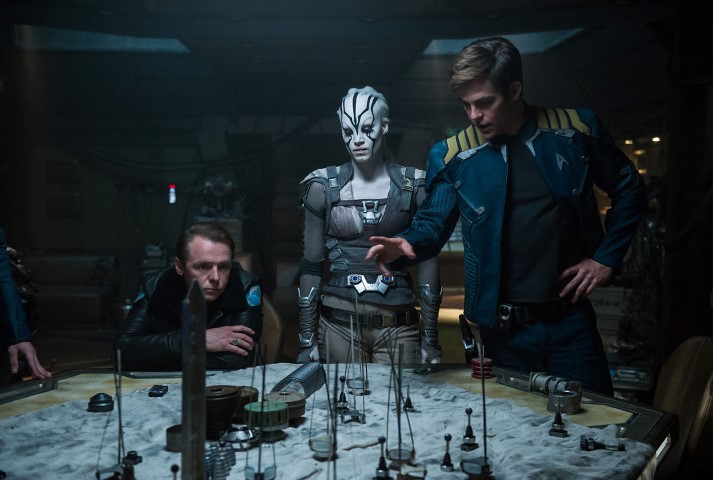 Knowing that Lin was onboard is enough to know the direction that Abrams had planned for Star Trek, leaning on the audio-visual elements without losing track of the characters or their journeys. In this sequel, we find the crew of the Enterprise stranded and scattered across a mysterious planet following a surprise attack from Krall and his battalion, who are trying to locate a powerful ancient artefact.

Chris Pine's mature take on Captain Kirk shows a man who has grown weary of his ceaseless missions and seeking to start a new chapter. Zachary Quinto explores Mr. Spock's human traits more as he develops a buddy movie dynamic with Karl Urban as Bones, who gets much more focus. Simon Pegg also gets more screen time, giving each of the key characters more space to grow without the insurgence factor of Benedict Cumberbatch as Khan in Star Trek Into Darkness.

Instead of Khan, we have Krall (do they just look them up in the phone book?), a foreboding enemy played by Idris Elba. You almost can't recognise the man under all the prosthetics and make up, but his voice, size and eyes have a familiarity. He's somewhat restricted by his get up, but the dictator's mysterious and sinister plans make him intimidating in an Idi Amin sort of way. The screenplay seems to be hinting at a political undercurrent, talking about struggle and even casting Elba, who's also known for his towering performance as Mandela in Long Walk to Freedom, however this isn't fully explored. 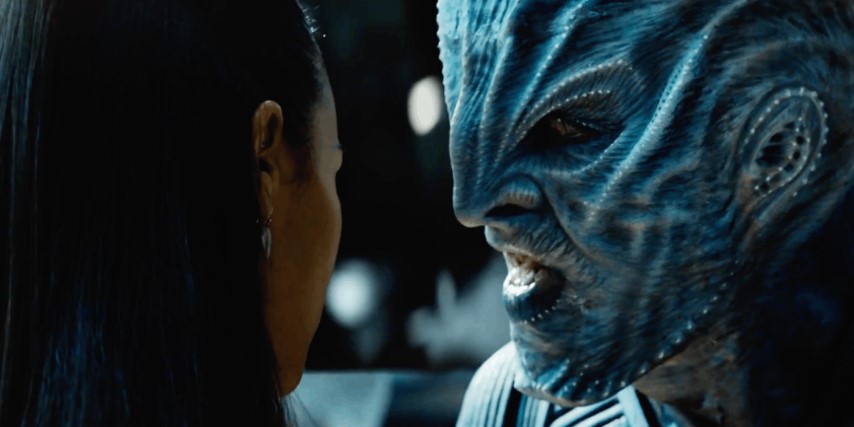 It may have had more resonance if the film wasn't so geared towards full-speed-ahead action. Lin's experience shines through, managing to balance the performances against the visual effects and the deep space warfare against the hand-to-hand combat. After recovering from the initial flurry of outer space peril, this action-intensive sequel becomes even more relentless, only slowing down to catch jokes and then thrusting forward into the next action sequence. The visuals effects are seamless, drawing us into the futuristic world of the Enterprise and contrasting that against the wilderness of the strange planet they find themselves trapped on.

The audio is just as dynamic moving from starship collisions, force fields and hi-tech weaponry blasts to old school dance and alternative music. Star Trek Beyond has definitely been influenced by Guardians of the Galaxy, incorporating a similar blend of action, comedy, teamwork, irreverence and mix tape charm, and Sofia Boutella (Jaylah). I remained invested in Star Trek thanks to the classic line-up of characters, but there's a fresh attitude thanks to this influence, making the sci-fi adventure more of a rollicking yarn than a pensive allegory for the War on Terrorism.

This fun-loving tone makes Star Trek Beyond all about the entertainment: disaster movie, buddy movie, heist and survival adventure... this sequel has it all. From letting Chris Pine pull off some stunts worthy of Steve McQueen in The Great Escape to culminating in a colossal action moment to the tune of The Beastie Boys, Star Trek Beyond has a fearless streak to it. The wink-wink charm of the cast and the full-blown action are probably just what Abrams wanted when Lin replaced him and they've managed to pull it off in a similar way to the roller-coaster ride that is Jurassic World. 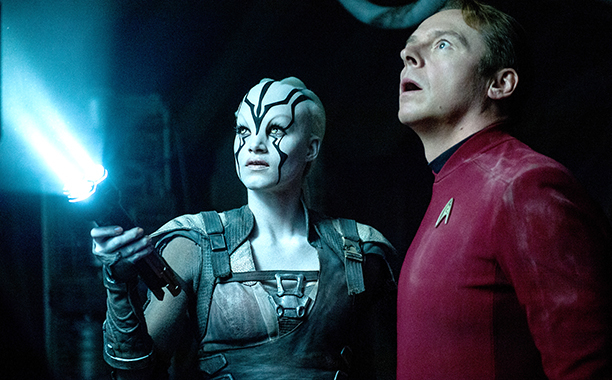 Anton Yelchin's haunting performance is a strange coincidence when you think about Lin's connection with Paul Walker in Fast & Furious 7. However, apart from a credit tribute, the film-makers have opted to steer clear of any heart-warming in-movie moments. It's probably what Yelchin would've wanted, being the pro he was, yet it still feels tragic. The creeping sadness is offset by some hilarious moments, especially between the odd couple of Mr. Spock and Bones.

All in all, Star Trek Beyond is a great popcorn blockbuster, designed to entertain and carry the torch without taking itself too seriously. It manages to accomplish its objectives, borrowing the tone of the Guardians of the Galaxy and formula of The Fast and Furious to create a spectacular and entertaining sequel.