As February began with the Chinese New Year – the Year of the Tiger – National Geographic Wild began this month with the launch of its 11th annual Big Cat Month. Launched during an enthralling session with acclaimed filmmakers Dereck and Beverley Joubert, who related their adventures, heartbreaks, close calls and showcased highlights from their spectacular videography and photography in a special virtual session this week.

National Geographic Wild’s 11th annual Big Cat Month takes place this February with a month of programming dedicated to the fiercest felines, creatures of magnificent strength, ferocity and beauty. With visually impressive and powerful stories from around the world, from lions, tigers, cheetahs and leopards to the most unknown and forgotten such as the serval, the African wildcat or the caracal, viewers can look forward to the fiercest programing on their screens every Saturday and Sunday throughout February from 18:00 (CAT).

On Sunday 5 February at 18:00 (CAT), National Geographic Wild (Dstv 182, Starsat 221) Big Cat Month begins with Relentless Enemies, which chronicles an epic story of how buffalo and lions survive and adapt to each other. A buffalo herd of over 1 200 is forced to move through three lion territories while being confined by the flood waters on a small island in the Okavango. As the buffalo strategize their advancements, the lions react every move they make, all captured through the Joubert’s lens from their home base in Botswana. 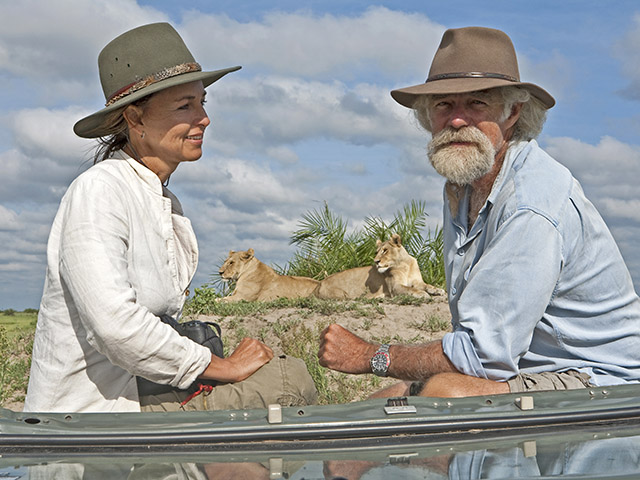 While Dereck and Beverly have made dozens of big cat films for National Geographic over nearly 40 years, they have never made one on cheetahs until now.

While lions may get the glory, cheetahs are utterly unique for two reasons. First, they are the most fragile cats physically and secondly, they are the most threatened in numbers, with less than 7 000 remaining on Earth. The premiere of The Way of the Cheetah, (Sunday 6 February at 18:00) follows Immani, a sleek female with four new cubs who must navigate the vast plains of the Mara ecosystem. But living here is also a coalition of five males, and to save her cubs, Immani must avoid them. The film goes under the cover of darkness with thermal cameras, and the Joubert’s capture the lush colours of Africa. However, when it comes to the hunting scenes, these shape shifting cats appear from nowhere in a blur, captured in ultra-high speed motion and the battles turn epic.

In Big Cat Odyssey, premiering on Sunday 6 February at 18:45 (CAT), the filmmakers dive deeper into the issues that surround big cats, specifically African lions and leopards. What struggles do these iconic big cats face? How have these lions and leopards survived and adapted over the decades? The Joubert’s lead viewers on a journey through the lives of big cats and their most iconic moments.

The Big Cat content continues throughout the month with various premieres, culminating in War of the Lions on Sunday 27 February at 18:45.

“Big Cat Month continues to be an exciting annual television event, and certainly a firm fan-favourite. This year we are delighted to honour prolific local filmmakers Beverly and Dereck Joubert, whose lifetime of impactful and thought-provoking documentaries have brought viewers a greater appreciation for Africa’s big cats,” says Christine Service, Senior Vice President and General Manager of The Walt Disney Company Africa. “Families can look forward to a month of fascinating, premiere, in-depth programming that reveals astounding new insights into these remarkable creatures, as well as highlighting the threats they face and the urgent action needed to conserve and protect our big cats for future generations” she added.

Big cats are facing big challenges. Many populations face potential extinction due to habitat loss, degradation and conflicts with humans. In response, The National Geographic Society, with its long history of raising awareness of the plight of big cats and supporting impactful conservation efforts across the planet, has partnered with the Big Cats Initiative. This initiative, founded by the Joubert’s, works with some of the world’s leading big cat experts, funding on-the-ground research and innovative conservation projects to safeguard big cats and their critical habitats, while leading efforts to shine a light on the challenges these species face. Viewers are encouraged to learn more about the Big Cats Initiative and how they can help safeguard big cats in the wild by visiting natgeo.org/bigcats.

You can take a look at the stellar lineup, with details for each film, below:

A buffalo herd of over 1 200 is forced to move through three lion territories while being confined by the flood waters on a small island in the Okavango. As the buffalo strategize their advancements, the lions react to each and every move they make. From the Joubert’s home base in Botswana, comes the epic story of buffalo and lions surviving and adapting to each other. Narrated by Jeremy Irons.

There really is no other big cat on the planet that is like a cheetah.  These are the most fragile cats physically and in numbers, now under 7,000 left in the world. Our story tells of Immani, a sleek female with 4 new cubs as they navigate the vast plains of the Mara ecosystem. But living here is also a coalition of 5 males, and to save her cubs Immani must avoid them.

The film goes under the cover of darkness with thermal cameras, and we capture the lush colours of Africa, but when it comes to the hunting scenes, as these shape shifting cats appear from nowhere in a blur, captured in ultra-high speed motion, the battles turn epic.

While the Jouberts have made dozens of big cat film for National Geographic over nearly 40 years, they have never done one on cheetahs until now.

Dereck and Beverly Joubert dive deeper into the issues that surround big cats, specifically African lions and leopards. What challenges do these iconic big cats face? How have these lions and leopards survived and adapted over the decades? The Joubert’s lead viewers on an epic journey through the lives of big cats and their most iconic moments.

Ultimate Enemies explores how some animals are thrust together by the forces of nature—sometimes through a millennium of evolution or even last year’s drought. In the aftermath of strange elephant deaths, they piece together a visually stunning story that confirms their theory that lions were hunting elephants. Narrated by Jeremy Irons.

Russia's Wild Tiger records the battle for survival of the big cats and reveals intimate details of their lives. The animals they prey on are also in the film: tigers couldn’t survive without sika deer, Altai wapiti, wild boars and Asian black bears. A young tiger, born in a conservation area, will guide the viewer through the film. Russia's Wild Tiger accompanies him throughout the year after he leaves his mother. His search for a territory reveals the problems facing tigers in Russia‘s Far East, and the conflicts that arise when he strays into human settlements. The young tiger takes the viewer to places where the fate of Siberian tigers will be decided: vast forests, remote villages and the cities at the edge of the wilderness.

Dereck and Beverly Joubert lead viewers on their incredible journey with big cats - from the first time big cats captured their hearts, through their boundless dedication to protecting these iconic predators. This story explores how the Jouberts got started and delves into their personal lives as National Geographic filmmakers and explorers.

Hidden in the jungles of Thailand lies an ancient kingdom, a last refuge for Thailand’s wild cats. Apex hunters, nearly invisible, they bide their time as they search for prey, pursue mates and protect their young. Within this tangled forest, a world of drama and unbridled power awaits the clouded leopard, the Asian fishing cat and the king of the jungle, the Tiger.

While the Jouberts set out to create a film on leopards, they never imagined they would be seduced by a small, eight-day-old cub named Legadema. Eye of the Leopard follows Legadema’s journey from a playful cub to a skilled huntress. Narrated by Jeremy Irons.

The serval, caracal and black-footed cat prove they are just as extraordinary as their African wildcat counterparts, the cheetah, lion and leopard.

The Joubert’s Emmy winning film is back with stunning remastered footage. Propelled by Jeremy Irons‘‘ gripping narration, Eternal Enemies reveals the story of conflict between lions and hyenas, relatively unknown or even suspected in the scientific world before this. The intense relationship and enduring rivalry between the two species play out in a battle of survival. Narrated by Jeremy Irons.

From savannahs bursting with game to deserts with not a drop to drink, all lion kingdoms are not created equal… so who is the REAL King of the Beasts?