Anyone who followed CES 2015 at the beginning of the year saw a major focus on both wearables and connected cars. Aiming to bring both together is German automaker BMW, debuting its new ConnectedDrive (featured below) remote app for its all-electric i3 and i8 cars. The app will work in conjunction with the Apple Watch, and will be available to all BMW i car drivers when the Apple Watch lands in South Africa. For now, that exact date remains a mystery, but BMW has listed all the remote app functions that users can look forward to.

The app will be freely available to download from the Apple App Store, and will provide users with all manner of diagnostic information about the cars. These include the battery status of the electric vehicles, as well as when they've reached full charge while plugged into a charging station.

Added to this, is the ability to control the internal settings for one's i car, such as the temperature for the in-cabin climate zones. Another feature is the ability to control one's horn independently from the Apple Watch i Remote App (shown after the break). While that feature may not be a particular standout, as finding one's i3 or i8 in a parking lot should be easily managed, considering there aren't too many on the roads as of yet.

Instead, we're far more interested in the route planning feature, which now only allows Apple Watch wearers to plan their work routes based on live traffic feeds, but also integrate other modes of transport into the overall route plan.

One of the other intriguing aspects, is the connectivity syncing available on the i3 and i8, as both models have slots for SIM cards. As such, not only can the i Remote App on the Apple Watch sync to one's BMW-built electric car, but also integrate information from both iOS or Android-specific apps.

While the i Remote app is ready and waiting for all i3 or i8 drivers, users will have to wait a few short months for the Apple Watch to arrive in the country. 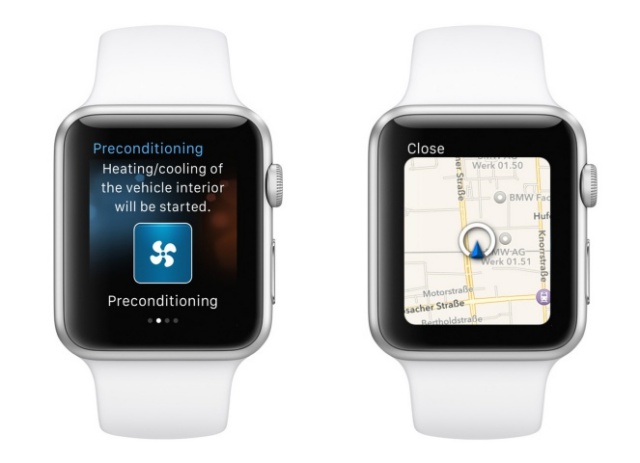