Call of Duty: WWII Multiplayer Private Beta - What we learned

Over the past weekend, Sledgehammer Games gave PS4 owners a taste of what the multiplayer mode for Call of Duty: WWII has in store, thanks to a private beta. It's set to go live once again this upcoming weekend (1-4 September), bringing Xbox One gamers into the fold as well. Having spent several hours on the beta ourselves, coming to grips with the mechanics, gameplay and feel of COD: WWII, here's what we have learned so far.

The start of the beta has gamers quickly fly over the new Headquarters gaming arena, a mode that will allow players to fine tune some of their combat skills, as well as fight against others. Unfortunately, the mode is not available in-beta, but will certainly be one of the interesting elements of the fully fledged game when released (3 November 2017).

From there, players will be enlisting to specific divisions, as opposed to the create-a-class system of previous COD multiplayers. There are four different divisions, each represented by countries that participated in World War II, and with their own set of subskills, weapons and clothing. We opted for the Infantry division, which is the most basic.

All gamers start at rank 1, with success within matches determining how much experience points are earned, as well as how quickly they attain new ranks. With each rank come tokens, which can be redeemed for weapon add-ons and other in-game skills. From our experience, getting to rank 10 is relatively easy, taking a handful of hours, but as expected, becomes increasingly more difficult as you're paired with better ranked gamers to compete against. 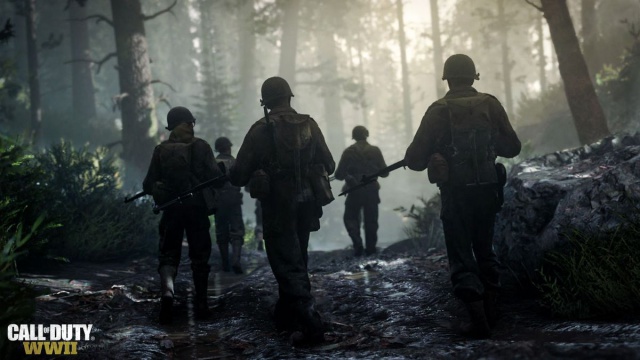 Shifting to the gameplay, three different maps are on offer for the multiplayer - Ardennes, Pointe Du Hoc and Gibraltar. For whatever reason, we only ever got matches in the latter two, which was fine all things considered, as they each offered up different fighting scenarios.

Pointe Du Hoc was split between a military outpost and farm, but being able to move quickly throughout the map proved essential, as one could outflank enemy targets if you reacted fast enough.

With Gibraltar, it was slightly different, with unique points littered all over the map for players to sit tight and spring assaults on enemies. It is perhaps the best map, to date, for team Deathmatches, as collaborative gameplay is encouraged more than in the Pointe Du Hoc map.

The key lesson, however, is that positioning will be a significant factor in winning during this multiplayer. 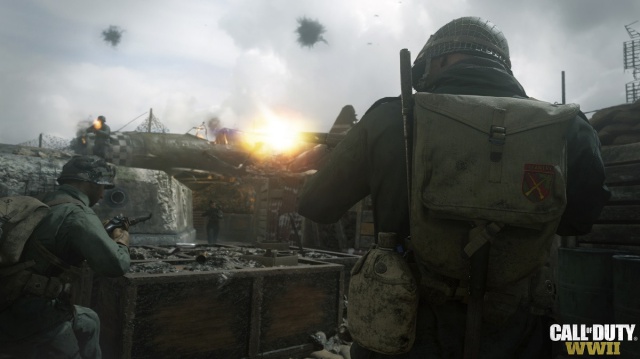 By the time we joined the multiplayer, we were being placed in matches with gamers ranked between 8 and 15. As such, we were a little out of depth, and this had a particular effect on our ability to kill enemy targets. At rank 1, the on-screen hairs for your weapon are quite far apart, which means accuracy is hard to achieve, and can only be enhanced by progressing in rank level. As such, we found ourselves opting for a low ammo count, higher accuracy weapon (like the M1 Garand) a lot of the time.

At a lower rank, you also quickly become cannon fodder for more seasoned players. In a particular Deathmatch in the Gibraltar map, we where were paired with rank 25 gamers, while still on rank 12. Needless to say, the result wasn't pretty, with enemy weapons firing faster and with more accuracy than we could muster.

The endless number of killshots we suffered did help strangely enough, with the killcam providing vital intel on the tactics employed by other gamers. As such, if you die from a surprise or unexpected attack in the multiplayer, it would behoove you to watch the killcam before respawning, and ensuring it doesn't happen again. 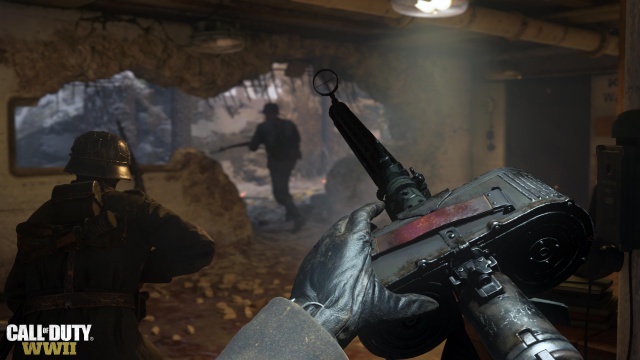 For the beta, Sledgehammer Games has served up four modes to try out. We often opted for Deathmatch, mainly as it filled up quickly with other gamers, making it the easiest to get to experience multiplayer gameplay. It also has some downsides though, with matchmaking a tad off, especially with high ranked gamers being pitted against lower ranked ones.

Another frustrating element was waiting in the match lobby for suitable Deathmatches, then being placed in the middle of an ongoing one that another gamer has left, which often meant that we were playing with an already depleted clock, and could not rack up as many points.

The other modes on offer are Dominion, Hardpoint and War. The former two are relatively similar, with the objective being to secure positions on the map and hold them for a period of time. War, however, is the one gaming mode we're most eager to play during this upcoming weekend's beta session. It is an untimed event though, which means you should likely play it with other gamers you're familiar with, as opposed to total strangers.

If this past weekend is anything to go by, Sledgehammer Games has certainly done its homework when it comes to the multiplayer portion of COD: WWII. With the old-school feel of Call of Duty back thanks to the World War II storyline, we think this forthcoming title could be a worthy challenger to Battlefield 1 and its multiplayer mode.