Canon has unveiled its newest addition to its entry-level DLSR stable, the EOS 1200D. The entry-level offering sports an 18 megapixel APS-C CMOS sensor; also onboard is Canon’s DIGIC 4 processor and a 9-point autofocus system, with its focusing points spread across the frame, and an ISO range of 100 – 6400 (although not the 12 800 or expandable ISO as found on higher end EOS devices).

As has become de rigueur for cameras – including entry level ones – the EOS 1200D further caters to Full HD video (1080p); although, as befitting new shooters, there are some creativity-friendly features here as well. Video Snapshot, for example, enables users to record a series of short video clips and automatically joins them together in the camera for a summary movie; a feature found on some high-end smartphones.

Another feature often reserved for compacts is the inclusion of in-camera creative filters. A choice of five different popular artistic styles, such as miniature effect, fish-eye and toy camera, can be applied either before or after a photo is taken. 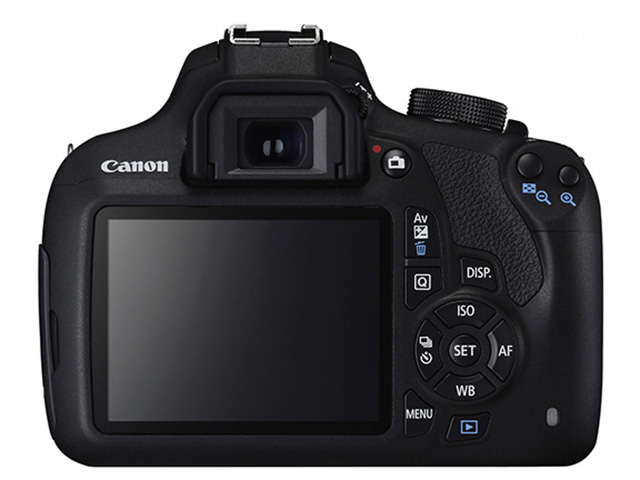 Small, compact and easily readable and accessible controls clearly identify the EOS 1200D as being squarely aimed at newbie photographers, or at least those new to DSLRs.

Further befitting its target audience – supposedly families, new enthusiasts or those stepping up from a compact camera or their smartphone’s camera - the EOS 1200D is apparently light (480 g) and compact. That being said, users will still be able to preview their images, or shoot video in Live mode while viewing the 3” LCD screen (460k-dot resolution).

The camera also has the distinction of being the first model from the company to ship with an EOS companion app (for iOS and Android), aimed at helping new photographers get to grips with their camera.

Furthermore, the included app also offers new users a selection of tutorials to begin mastering the fundamental pf photography; popular photographic pursuits including pets and peoples, as well as a troubleshooting guide to help users address some of the common photographic mistakes and learn how to correct them.

As the announcement is very recent, there is no word yet as to local availability or pricing. However, at $550 (R6 050) the with 18-55 F3.5-5.6 lens, we don’t imagine it will be too pricey, unless the horrible Rand-Dollar exchange rate spoils aspiring and new photographers’ fun.