The recent F5 Networks Agility 2017 conference, held in Barcelona, illuminated a particular theme of change that seemed to lie as a subtext to the event itself. However, not just change for its own sake, but rather as to move towards and embrace the future. This theme could be seen in the Future of Apps report, alluded to in an interview with Ben Gibson, and was elaborated on in the keynote address. Indeed, F5 Networks has undergone a notable change of its own, having just appointed a new CEO, Francois Locoh-Donou.

And in his speech to the media as well as his keynote address, Locoh-Donou didn’t hold back about the role change is currently playing in the industry, nor is he a stranger to change. He began by relating a major occurrence in his childhood, when he had to move, reluctantly, from his native Togo to France.

“I was devastated, as I realised I was going to lose most of the things I loved. That change turned out to be everything I feared it would be, and entailed having to learn a new school, make new friends, and all I wanted to do was go back. Over the years I saw that new opportunities began to emerge, such as for higher education, for a career in technology, and to learn about other countries and cultures,” he elaborated. 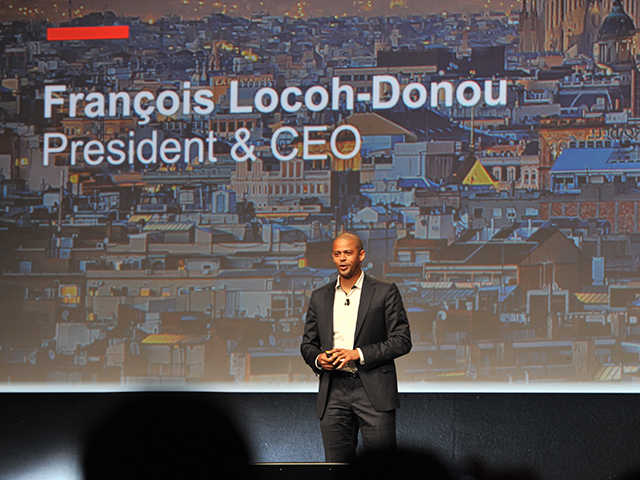 Locoh-Donou continued that, as an adult, when he reflected on that formative change, he realised that there was a valuable lesson to be gleaned. “While change is scary and is hard at the beginning, there are opportunities beyond change that for some reason you can never see until you have fully committed to change and made the initial steps,” he relayed.

He noted that over the past 25 years, he had re-encountered that same lesson ten times, in his personal life and career, and also in the technology industry itself, as he worked with teams to transition from legacy systems to next generation software architecture and tools, for example.

“Why is this relevant to us here and now? It is relevant because there is a lot of change coming in the industry, some of which are quite futuristic in terms of artificial intelligence and their interaction with human beings,” he explained.

Looking ahead to the next five years, Locoh-Donou believes that there are three dynamics that stand out, namely the cloud, security and the Internet of Things. He noted that each of these trigger a visceral discomfort and are accompanied by particular fears of change. However, he also reminded that for those who were willing to look beyond the surface and embrace change, new opportunities awaited discovery.

Addressing cloud, he asserted that the fear of change centres around becoming irrelevant, particularly for those in the industry who are already experts at infrastructure and applications, with both of these, over time, moving to the cloud.

“But if you look at how most organisations will embrace this paradigm shift, they will disaggregate their workloads and applications  over multiple clouds, including public, private and hybrid. As a result of that, new complexities emerge, such as how to manage applications in multiple environments, how to protect applications and data, most importantly, how do you find problems.”

Elaborating on the latter, Locoh-Donou explained that it is hard enough to find the cause of problems when applications go wrong when these are in a company’s own data centre and on its servers. However, finding problems when workloads are distributed across multiple environments, multiple public clouds and with different service providers, pose significant challenges. This however, creates new opportunities for those in the industry, who understand applications and infrastructure, to become much more strategic than they have been to date.

Addressing the ever critical issue of security, Locoh-Donou continued that he believes the fear of change around security is the fear of what’s next. “For the last five years every year we have talked about it being an unprecedented year in terms of the size and frequency of attacks. It seems to me that now we are making that statement almost every month. But beyond just the size and frequency of attacks, if you think about applications moving to the cloud, there is a race for consistency of security services,” he added.

Locoh-Donou also asserted that while there had been a lot of talk about endpoint and network security, there hasn’t been as much focus on application security, which presents the opportunity to rise to these new challenges as well.

Finally, he addressed the Internet of Things, noting that the fear of change that stands out is the fear of just being overwhelmed. This fear is entirely understandable, as it is one thing to contend with tens of millions of PCs, or even, as the industry has become accustomed to, contend with a few billion mobile devices. “It is a whole different game when you have tens of billions of devices that need to be connected, secured and activated with new applications. That to me is a great opportunity, especially since we do scale better than most companies in the industry,” he enthused.

Change, dealing with fear and grasping opportunity weren’t the only interesting points to arise from the keynote. Completely separate from the earlier interviews, Locoh-Donou nonetheless echoed chief marketing officer Ben Gibson’s advice on a valuable secret of success, as he too stressed the importance of listening and empathy. To this end, he concluded that the purpose of its Agility event was to listen to its clients and help them move their businesses forward.