The 2015 San Diego Comic-Con is now over, and while that may leave some geeks lusting for more, there was plenty detailed at the event over the past few days. We saw many entertaining, and in some cases boring, trailers debut, as well as some films detailed with more info. One such was X-Men: Apocalypse, which had a panel discussion and showcased a trailer (not officially released yet). While some SDCC attendees leaked rather shaky smartphone footage of the trailer, we've decided to wait for 20th Century Fox to do the honours. 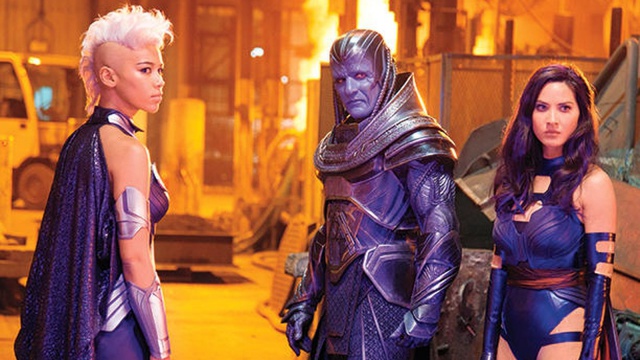 In the meantime however, Entertainment Weekly, has unveiled a slew of images from the film, the most compelling of which shows the main protagonist Apocalypse (En Sabah Nur), flanked on either side by two of his cohorts, Storm and Psylocke. The former has been recast for the film, with relatively unknown actress Alexandra Shipp (Straight Outta Compton). Psylocke on the other hand, should be familiar to geeks the world round, with Olivia Munn (Magic Mike) inhabiting the role.

Our attention however is placed squarely on Apocalypse, who underneath all the makeup, is played by Oscar Isaac (Star Wars: Episode VII - The Force Awakens). Based on the images, Apocalypse is far smaller than we'd imagined, with the comic books referencing him at well over 6ft 5" and weighing an estimated 300 lbs (136 kg). As such, he seems far less imposing and menacing than we'd like.

Although En Sabah Nur doesn't seem to carry as big a physical presence, this is still one film we cannot wait to watch when it arrives in cinemas in May 2016.