Since the launch of last year’s Versa 2, Fitbit seems to have been busy with a new version of another favourite of theirs. Now the Charge 4 has been announced and it’s packing something the Versa 2 (review) could have done with – built-in GPS.

For those who don’t know the Charge series, it’s more of a fitness tracker with a display than a full smartwatch. The Charge 4 looks very similar to the Charge 3 (review), and is housed in a swimproof design, featuring a scratch-resistant screen and an OLED touchscreen display, providing up to seven days of battery life. 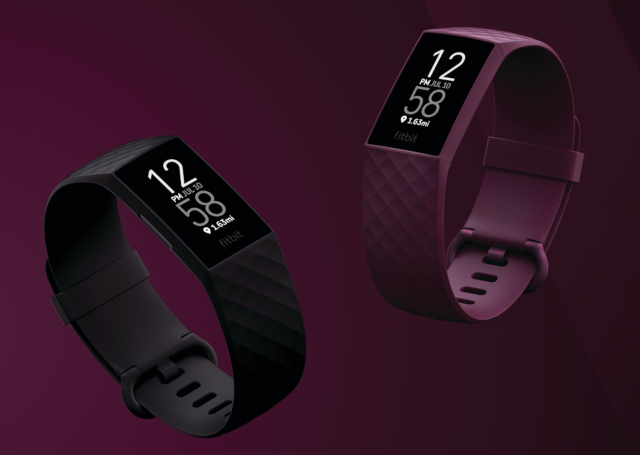 It’s the GPS that’s the killer feature here, with the Fitbit Ionic being the only other other model in the Fitbit range that contains one. On the Charge 4 there are seven GPS-enabled exercise modes, including a new outdoor workout mode for any outdoor activity like hiking, running or a brisk walk. After completing a GPS-enabled workout, the device will sync and provide a GPS-powered heat map in the Fitbit app. Here you can see your workout intensity based on your different heart rate zones along your route, to help you visualise and improve how you are performing against different terrain.

Fitbit also developed Active Zone Minutes to help one understand how an activity contributes to overall health, beyond the number of steps taken. With Fitbit’s PurePulse 24/7 heart rate tracking, Active Zone Minutes uses your personalised heart rate zones to track your effort for any energizing activity, whether doing a HIIT workout, power yoga or taking a run outside. You earn credit for each minute of moderate activity in fat burn zone and double the credit for vigorous activity in cardio and peak zones – Active Zone Minutes does the math so you can quickly understand how many you need to reach your daily and weekly goals.

If there is one thing Fitbit is really good at, it's sleep tracking, with Sleep Score providing deeper insights into your sleep with a daily look at the quality of your sleep. The company also promises Smart Wake to come, which uses machine learning to wake you at the optimal time. On the Charge 4 you'll also find a relative SpO2 sensor, which powers Fitbit’s Estimated Oxygen Variation Graph in the Fitbit app. With the graph, see an estimate of the oxygen level variability in your bloodstream, indicating variations in your breathing during sleep.

The usually smartphone notifications are there, including on-screen call, text, agenda and app notifications, and quick replies on Android to respond on-the-go, plus Spotify control if you are subscribed to it.

Fitbit is offering 40 new pieces of Premium content free in the Fitbit app, while anyone new to Fitbit Premium can get a 90-day free trial of this paid subscription, which includes personalised health insights, guidance, advanced sleep tools, customised programs and 200+ workouts.

The Fitbit Charge 4 will be available in South African stores once they reopen, going for R2 999 in black, rosewood and storm blue/black. If you want to up the ante, the Charge 4 Special Edition will be available for R3 399 in an exclusive granite reflective/black woven band plus a classic black band to easily swap out for workouts or a sportier look.