Gaming News Round-up - The What is Next edition

Dreamfall Chapters may be heading to next-gen consoles

Dreamfall Chapters, the sequel to The Longest Journey and its follow-up Dreamfall, may be destined for release on next-gen consoles, as well as tablets, its lead developer, Ragnar Tornquist, has confirmed at Rezzed 2013.

Earlier this year, the company raised $1.5 million via its Kickstarter campaign, something Tornquist cited as being instrumental in allowing the game to happen. The adventure game, which already has an alluring trailer and is due November next year, takes place in the dual worlds of Stark and Arcadia, with the former being futuristic/technological in focus while the latter is an enchanted land of magic.

In an interview with Eurogamer, he elaborated that talks were furthest along with Sony, stressing that the studio hadn’t ruled out the Xbox One or the Wii U either. Following launch on consoles and the PC, the company intends to then make it available on mobile platforms as well.

In the video below, Tornquist showed the trailer, elaborated on the game’s story, showcased several of the characters making an appearance, and then showed actual gameplay.

This “game with Soul” certainly appears to be one well worth keeping on one’s gaming radar. Take a look at the video below for more

Following news earlier this year that American McGee’s Spicy Horse development studio was considering doing a Kickstarter either for the next chapter in the Alice franchise, or for a twisted take on the world of Oz, it appears that the latter is in the works.

The decision apparently has to do with some intricate licensing negotiations still underway between Spicy Horse and EA, the publishers of Alice: Madness Returns. Nonetheless, the single player Ozombie, which is now in preproduction, certainly has an intriguing premise, with players stepping into the shoes of Dorothy’s great-great-granddaughter, who has to fight against a particularly evil Scarecrow.

Expect to see some familiar characters though, with the Tin Woodsman and, presumably no longer cowardly, Lion, joining her in fighting the good fight.

The game will apparently feature a variety of perspectives and game modes with an emphasis on role-playing, tactical combat, exploration and storytelling. After finishing the single player campaign, players will then be able to unlock a multiplayer mode as well.

The campaign has to reach a target of $950 000 by the 5th of August. Promisingly, it has already raised $97 000 since starting four days ago. Not familiar with McGee’s wonderful weirdness?

Take a look at his strange but amusing take on launching a Kickstarter campaign in the video below.

One of the biggest selling titles each year here in South Africa is the WWE franchise. WWE 2K14 makes its way to the virtual arena during October for the PlayStation 3 and Xbox 360.

Developer 2K Games revealed the WWE 2K14 game cover art featuring legendary WWE superstar and Hollywood actor Dwayne “The Rock” Johnson. In addition, the game’s debut trailer was also released and is posted below to smell what The Rock is cooking.

Local soccer and sports simulation fans can mark 27 September on their calendars, as this is when FIFA 14 launches in South Africa (at least for current generation gaming hardware).

EA Sports has revealed the official Xbox 360, PlayStation 3, and Windows PC pack shots, which are posted below and feature Argentina and Barcelona star Lionel Messi. The game will also be released at a later stage for the PlayStation 4 and Xbox One, powered by the company's next-gen Ignite gaming engine. 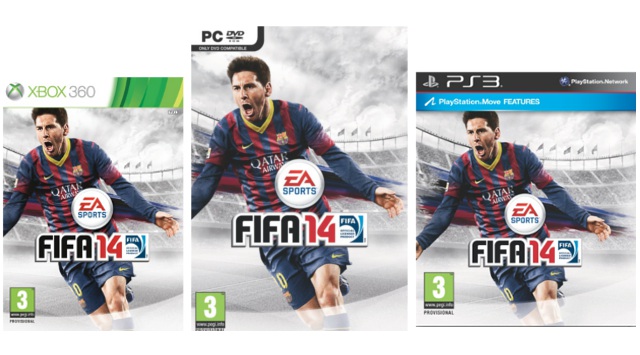 If you were the kind of kid that loved Lego’s and fantasized about creating your own world, then Disney Infinity’s toy box world creation feature looks set to finally deliver. The game allows players to immerse themselves in familiar Disney/Pixar worlds such as Pirates of the Caribbean, The Incredibles and Monsters University, as well as create their own worlds.

Using the Toy Box World Creator functionality, as the new video below aptly demonstrates, will enable players to create their own worlds and their own games. The impetus to keep playing is that the more users do so, the more they will unlock new buildings, tracks, land textures, sky options, vehicles and weapons with which to build yet more elaborate worlds and gameplay experiences.

Intrigued yet? Take a look at the video below to see if this title, slated for release in August, sparks your creativity.

Dice showcases the beauty of the Frostbite 3 game engine

The recently held E3 gaming expo showcased a wealth of gaming titles that are sure to find their way onto many a gamer’s holiday season acquisition lists. FPS gamers have a range of titles to look forward to including Bungie’s Destiny, as well as the two main rivals within this genre - Battlefield 4 and Call of Duty: Ghosts.

In the trailer posted below, Battlefield 4’s developers Dice showcases the mind-blowing visuals that its next-generation Frostbite 3 engine is capable of. This versatile gaming engine is also being employed to drive the eyecandy and destructibility of vehicles within Need for Speed: Rivals. Click on the link below to witness the engine in action within Battlefield 4.