While Hearthstone: Heroes of Warcraft has been racking up commendations on Apple’s iPad devices for much of this year, geeks on Android devices may have despaired of ever seeing the free to play card battling game on their OS of choice. If that aptly describes you, then despair no more, because finally Blizzard’s online mobile offering has found its way to Google’s OS as well. There are requirements though – devices need to have a 6” screen or larger, 1 GB or more of memory and running Android 4.0 or later. 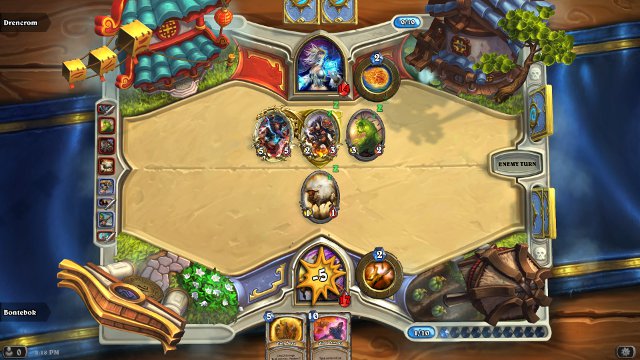 As on the iPad equivalent, players will need a Battle.net account, but the hook is that those logging into a game on their Android tablet will find a small gift waiting for them in the form of a classic card pack.

With only two weeks to go till the 2014 as we know it comes to an end, Google has compiled its annual Year in Search search report, detailing what events, people and things in general people searched Google for. As far as the global search went, Robin Williams ranked in first place, after the actor’s death earlier in the year. Jennifer Lawrence claimed top spot as the top trending person, most notably a result of the celebrity hack in which nudes photos of countless celebs spilled onto the internet. 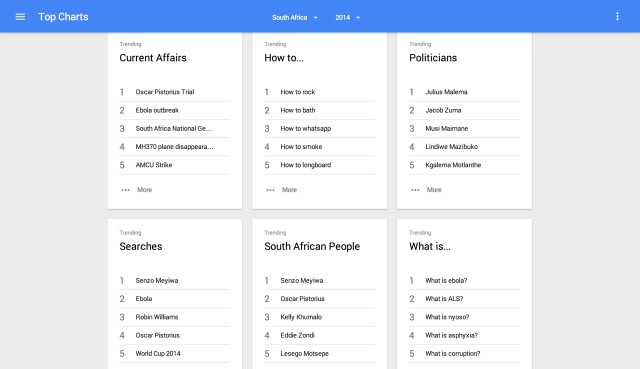 Focusing a bit closer to home, the Oscar Pistorius Trial reached pole position in terms of trending current affairs, with the recently deceased Bafana Bafana goalkeeper Senzo Meyiwa reaching top spot among trending searches. Oddly the current Ebola outbreak ranked in the top five, but failed to claim a top spot in the vast majority of countries. Along with the trend report, Google has also created a page for the top stories of 2014, with mobile gaming phenomenon Flappy Bird and the Rosetta landing being featured.

Another blast from the past, Mad Max has been given the Hollywood reboot treatment, with Tom Hardy (The Dark Knight Rises, Inception) playing the role of the titular character. Also making an appearance is Charlize Theron who plays Max's pseudo-love interest, although there doesn't seem much time for a fledgling romance amid the post-apocalyptic action that the trailer showcases. 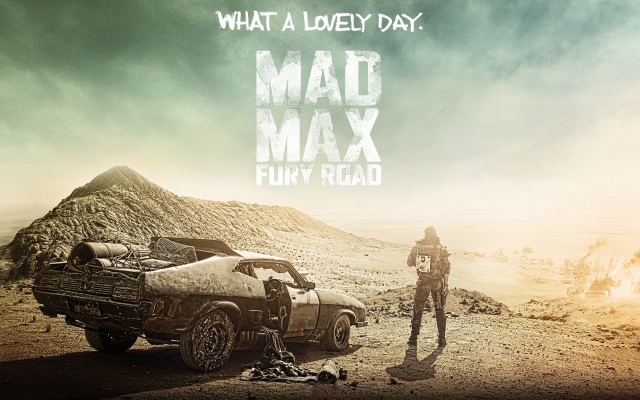 Similar to the original Mad Max film of the late 70s, our hero has just suffered a tragic loss and tries to survive in a world filled with ravenous enemies all vying for dominance. If the trailer is anything to go by, this new installment is the most action-packed film yet, and crammed full of explosions and death-defying stunts to keep moviegoers entranced. Hit play on the trailer below for a better look at Mad Max: Fury Road and a buzzcut-sporting Charlize Theron.

Any movie fan is all too aware that Daniel Craig's James Bond is primed to hit the big screen again in late 2015 with Spectre. Along with Bond himself, as well as a few new Bond girls to fawn over, producers Columbia Pictures also offered some eye candy of a more automotive nature. Namely, the new Aston Martin DB10, which looks immensely sleek and streamlined, just the car James Bond will need while taking on his latest foe. 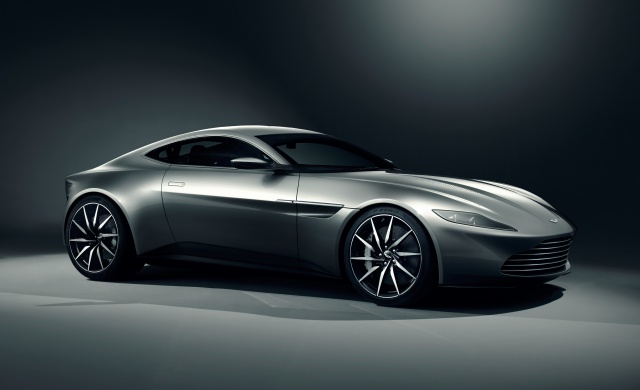 Still several months away from release though, it has allowed XCAR to compile a beautiful little video chronicling all the Aston Martins Bond has driven in the past, as well as a few he did not. Highlights include the Aston Martin Vanquish which featured in Casino Royale, as well as the iconic DB5 from Goldfinger. Click on the video after the break for a brief history lesson and a handful of cars too achingly beautiful to describe.

Pirates of the Caribbean 5 may be given the (re)boot

In case you were wondering whatever happened to Pirates of the Caribbean, and given up on it sleeping with the sharks after walking the plank back in 2011, then listen up me hearties – the franchise may be getting a reboot and not just a sequel after all.

Apparently, or at least according to Orlando Bloom, talks are under way to breathe new life into that now old franchise, with the rumoured Pirates of the Caribbean: Dead Men Tell No Tales potentially focusing on the relationship between Davey Jones and his son. 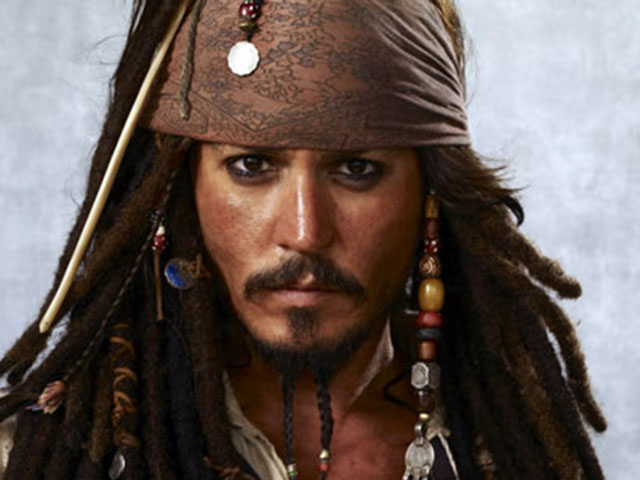 Whether Bloom will return though, at least according to Screencrush, is unconfirmed at this point, although Johnny Depp and Geoffrey Rush are expected to reprise their roles as Jack Sparrow and Captain Barbarosa respectively. Get ready to console your parrot though; as the movie, whether reboot or sequel is only expected to hit cinemas in 2017.

When we first heard that Norton, a company instantly associated with antivirus software, was getting into the fashion game, we had to do a double take. According to a new partnership with San Francisco-based Betabrand, Norton is helping to design some radio frequency identification (RFID) garments. This technology would specifically be applied to the pockets of the clothes in question, in this case a pair of jeans and a blazer.

The purpose behind this application would be to better safeguard your pocket contents from any artful dodgers aiming to pry you lose from any prized possessions. These concepts were initially pitched during Betabrand's think-tank event, and currently sit in the crowdfunding phase of development.  The READY Jeans as they're being branded have already reached their funding goal, with the Work-It Blazer still sitting at 18% of its goal with 19 days still to go. Check out this video to see the RFID jeans and blazer in action.

The City of Angels, or as you may know it, Los Angeles, has had to deal with vapid reality stars, smog and crazy hectic traffic; but as if that wasn’t enough, according to the latest news, the beleaguered Californian town will also have to contend with the walking dead as well.

AMC’s extremely popular drama-horror show has been rumoured to be receiving a spin-off for some time now, and according to TVline, it will be leaving its Southern roots and going west. Let’s just say that given LA is famous for being almost as hardcore as downtown Joburg, we fully expect these walking dead to make their southern counterparts look genteel by comparison. Also, it begs the questions: just what locales may be used as sanctuaries. Hollywood mansions, anyone? And how will the survivors tell the zombies apart from those who just had their facelift go awry? 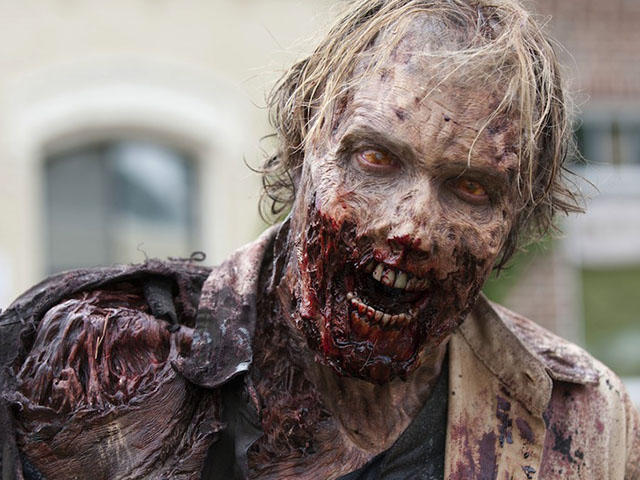 Apparently the spinoff will look at the early days of the zombie infection (perhaps just after the point where people were falling onto train tracks because they were wholly engrossed in their smartphones while walking) and efforts to contain it. The first episode is planned to be filmed early in 2015.