Geek out at the ICON Comic & Games Convention starting tomorrow

There's quite a bit of ballyhoo around Comic Con Africa, but for geeks who can't wait, SA's longest running comics and gaming convention is on this weekend.

ICON Comic & Games Convention starts tomorrow, Friday 29 June 2018 at Emperors Palace in Joburg. Apart from loads of comics, figurines, art and boardgames to buy, it's also the place to be for wargaming, trading card games, role playing, cosplaying and anime.

More than that, there's a number of interesting panels and speakers to keep attendees wrapped in geek bliss. We can argue about who should be mentioned first, but we'll go out on a limb and go for Jim Zub, who's currently writing Avengers: No Surrender. Zub will be proving lessons in self publishing on stage Friday, and chatting about character creation on Saturday. 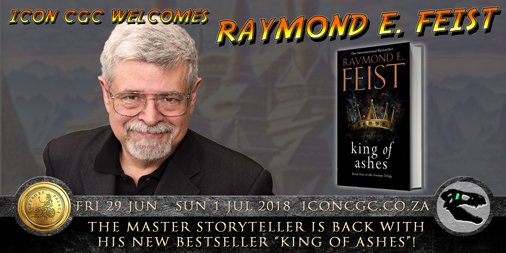 Raymond E. Feist is another massive drawcard, and is one of the world’s leading fantasy writers, known for The Empire Trilogy and his new King of Ashes, amongst others. He will be taking the stage a number of times during the weekend, chatting about his writing and signing novels.

The awesomeness of local talents Sean Izaakse (The Uncanny Avengers) and Jason Masters (Suicide Squad) will also be display, talking about their work on some of the most iconic characters in comic book history.

Those into cosplay will know that ICON 2018 will serve as the first WCS event on the African continent, with the winners flying to Nagoya, Japan at the end of July to represent SA at the finals. As far as we can tell official entry to this event has closed, but that’s not to say you can’t dress up for the weekend.

For a the full schedule of events happening over the weekend, click here. The obvious next question, is how much for tickets. A day pass will set you back R120, while a weekend VIP pass starts at R895. ICON runs till Sunday, and doors open at 9h00 on Friday.