GoPro has been dominating the action camera space for awhile now, but the American company has turned its attention to drones in recent months. To that end, in December last year they released footage from a flying device codenamed Karma at the time. Now, said drone has seen the light of day, with GoPro sticking with the monicker Karma.

One of the interesting aspects is that the company's first-ever drone is also foldable. To that end, with the propeller arms folded in, the Karma's width goes from 411 mm to 224.3 mm. It also tips the scale at 1 kg and operates on 2.4 GHz frequency. In terms of speed, GoPro says it can muster a pretty rapid 56 km/h, with a maximum flying altitude of 14 500 ft, operating range of 1 km, as well as coping with up to 35 km/h headwinds. 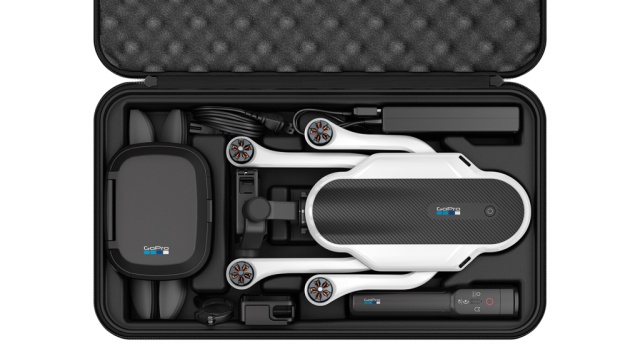 In terms of camera compatibility, the Karmas can work with GoPro's own Hero4 (Black or Silver), along with the recently unveiled Hero5 Black and Hero 5 Session. Added to this are a number of accessories, including a 5.2" display touting Karma controller and Grip handle for use while shooting on the ground.

The Karma drone will debut 23 October Stateside for a recommended $799, but no word just yet on when it will be available locally. Watch the Karma in action in the video below.