Google launches Collections - a photo board feature for Google+

In the world of social media, Facebook, Twitter and Instagram reign supreme. Placed a bit behind them is Google+, which has not proved as popular as the Google may have hoped. Today though, the company is aiming to up the popularity of its service, with the launch of Collections. This new service allows users to create image/photo boards with specific messages, comments or tags. Collections is in no way an innovative offering, as sites like Pinterest are essentially built on the same principle.

That said, this new offering does give Google+ users something new to try out, and it shows an effort by Google to attempt something different. Along with users being able to curate their own Collections boards, they will also be able to view the boards of Google+ users they're following. 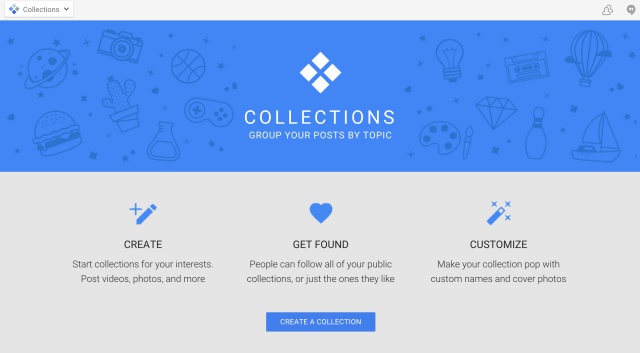 Currently, Collections remains an offering open to Google+ Android and PC/Mac users, with Google stating that a version for iOS is in the works and will arrive within the next few weeks. Google has also confirmed that Collections can be made both public and private, with the latter leading unspecified users back to the Collections homepage.

If you're a Google+ user whose interest has been piqued, check out Collections here and start crafting some boards.