Last night, London played host to an HMD Global event where Nokia Mobile (in its most recent incarnation) revealed its first flagship phone - the Nokia 8. To date, Nokia Mobile has only showcased three smartphones, all of which taking their official bows at Mobile World Congress in Barcelona earlier this year, and aimed at the entry-level to mid-range space. 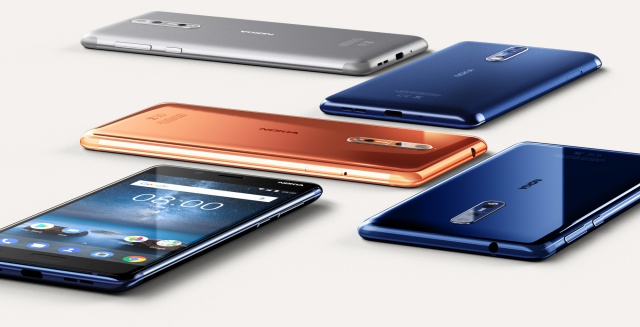 Consequently, Nokia Mobile was expected to up the ante as far as specifications went for the Nokia 8, and it certainly delivered in that regard. To that end, as rumoured a few weeks ago, an octa-core Qualcomm Snapdragon 835 chipset is present to do the heavy lifting. Added to there are 4 GB of RAM, 64 GB of internal storage, a 3090 mAh battery and a pure version of Android Nougat 7.1.1.

On the design side, the Scandinavian influence of Nokia's Lumia days are present, although the Nokia 8's aluminium unibody has a few more curves to it compared to the stylings of the Nokia 6 for example. Up front there's a QHD 5.3" display that touts a 2560x1440 resolution and 700 nits of brightness. It's also IP54-rated splashproof, but don't expect to submerge in water like the Galaxy S8 or iPhone 7 with no ill effect.

While the Nokia 8 ticks all the boxes required of a flagship phone, it's on the extra features side where things get interesting. According to HMD Global, all these features are firsts for a mobile device.

First worth noting is the camera setup, with Zeiss Optics taking care of that portion, and delivering a trio of lenses. There are two on the rear, with a 13 MP colour/ OIS (Optical Image Stabilisation) seonsor and 13 MP monochrome option. Up front, the 13 MP camera sports predictive autofocus.

All three combined for something that HMD Global is calling the "bothie", which taps into the Nokia 8's camera app and serves up a Dual-Sight feature that essentially facilitates 360-degrees worth of video broadcasting. While HMD global calls it a first, we've seen similar offerings from Samsung and LG in the past. Whether or not the term "bothie" catches on is another matter altogether.

Next is the integration of OZO Audio via three microphones on the Nokia 8 and an HMD Global developed algorithm which captures more immersive soundscapes, according to the company. They say it will prove the perfect match for the 4K videos you can record on the Nokia 8.

The Nokia is currently slated for release in Europe sometime in September, although precise dates have not been mentioned at this stage. What is known is that it will cost a recommended €599 (R9 300) north of the equator, and come in four colour options (Polished Blue, Tempered Blue, Polished Copper and Steel). As for its local availability, no word from HMD Global just yet, but we'll keep you posted.