Handset data traffic to grow threefold by 2017 to 21 exabytes

According to the latest research from data analytics company Strategy Analytics (SA), web data traffic via mobile phone usage will undergo exponential growth during the next five years.

According to SA, this kind of traffic increase puts tremendous pressure on carrier networks worldwide to keep users with data-hungry smartphones satisfied. One of the key driving forces behind the sharp web traffic growth is online video, with a compound annual traffic growth figure of 42%.

Susan Welsh de Grimaldo, director of the wireless networks and platforms service at SA, explained that mobile carriers are increasingly concerned with delivering a cost effective and satisfactory mobile video experience on smartphones over 3G, LTE (4G) and Wi-Fi networks.

“More critically, carriers are asking how to monetize this growth in video traffic to profit from major investments made in LTE and other network upgrades,” de Grimaldo added. 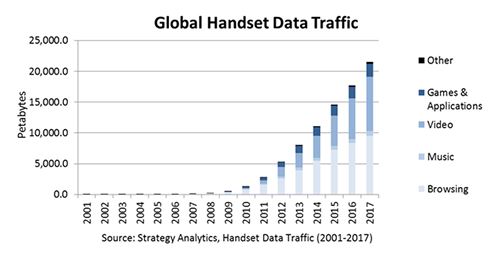 David MacQueen, executive director for the Apps and Media division at Strategy Analytics, noted: “Data traffic has been almost doubling annually as smartphone penetration has increased and attractive, compelling media services have launched.”

MacQueen added that, “As developed markets mature we expect a slowdown in traffic growth to a 32% compound annual growth rate from 2012 onward, but this nonetheless sees carriers forced to find novel ways to handle huge volumes of traffic which will rise from 5 exabytes of data per year to over 21 exabytes per annum by 2017.”

In related news, SA recently stated that the game console market is projected to continue its downturn during 2013, ahead of the PlayStation 4 and Xbox One’s releases at the end of this year.

Hot New Trailers: Passengers
Cloud solutions need to be always-on
Fitbit Versa
The Pixelbook is Google's latest 4-in-1 notebook offering
Fitbit Versa
Seamless communication is key to CX: Here is what it should look like
Snapping the chains that bind the business to legacy telephony limits