Jaguar Land Rover is developing next-generation head-up display technology that could beam real-time safety information in front of the driver, and allow passengers to stream 3D movies direct from their seats as part of a shared, autonomous future.

The company notes engineers are working on a new 3D head-up display to project safety alerts, such as lane departure, hazard detection, satnav directions, and to reduce the effect of poor visibility in poor weather or light conditions. Augmented reality would add the perception of depth to the image by mapping the messages directly onto the road ahead.

Studies conducted in Germany, show that the use of Stereoscopic 3D displays in an automotive setting can improves reaction times on ‘popping-out’ instructions and increases depth judgments while driving.* 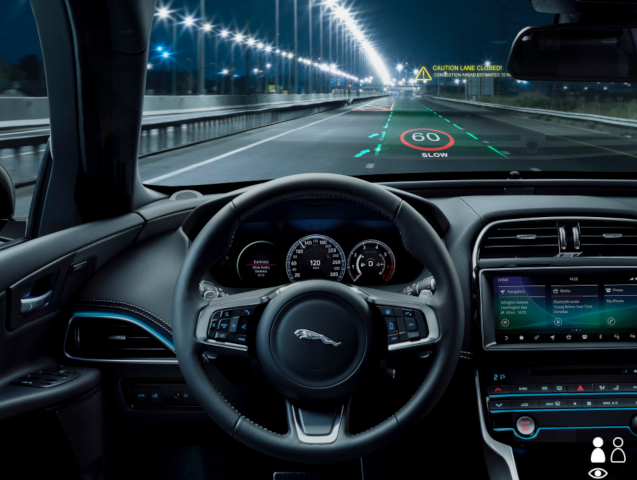 Jaguar Land Rover believes in the future, the innovative technology could be used by passengers to watch 3D movies. Head and eye tracking technology would follow the user’s position to ensure they can see 3D pictures without the need for individual screens or shutter glasses worn at the cinema.

In a fully autonomous future, the 3D displays would offer users a personalised experience and allow ride-sharers to independently select their own infotainment. Several passengers sharing a journey would be able to enjoy their own choice of media – including journey details, points of interest or movies – and optimised for where they are seated.

The research – undertaken in partnership with the Centre for Advanced Photonics and Electronics (CAPE) at University of Cambridge – is focused on developing an immersive head-up display, which will closely match real-life experience allowing drivers to react more naturally to hazards and prompts.

The next-generation head-up display research forms part of the development into Jaguar Land Rover’s ‘Smart Cabin’ vision - applying technologies which combine to create a personalised space inside the vehicle for driver and passengers with enhanced safety, entertainment and convenience features as part of an autonomous, shared future.

Together, these efforts are driving towards Destination Zero; Jaguar Land Rover’s ambition to make societies safer and healthier, and the environment cleaner. Delivered through relentless innovation to adapt its products and services to the rapidly-changing world, the company’s focus is on achieving a future of zero emissions, zero accidents and zero congestion.