Leaks happen, unfortunately there part and parcel when working in the tech industry, and more specifically when you're about to debut a new device. While the likes of LG and Samsung have succumb to in in recent years, now it’s the turn of Motorola. The American manufacturer, now owned by Lenovo, have mistakenly leaked info about its new mid-range Moto G (3rd Gen) smartphone. The device was set to be unveiled at an event in New York next week, but someone seems to have jumped the gun on the specs.

Se that the info is now out there, let's take a look at what this mid-range smartphone is packing. According to the leaked posting, which comes courtesy of the company's Moto Maker website (a site that allows users to customise their device), Motorola's new mid-raneg device should come well-specced. The first detail is onboard storage, with the option of 8 GB or 16 GB flavours available. The latter is said to feature 2 GB of RAM internally, although the listed RAM for the 8 GB variant is unknown at this stage. 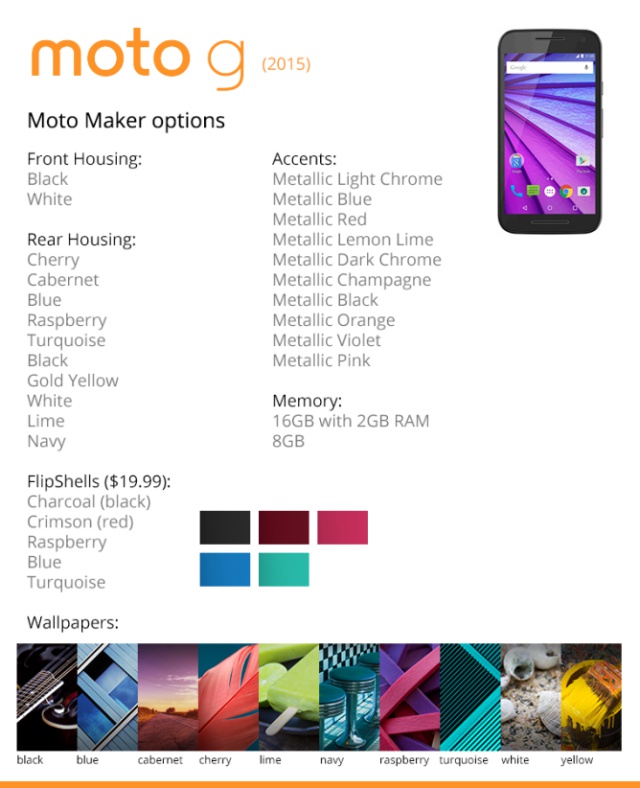 Along with RAM and onboard storage specs, both variants of the Moto G will sport an HD display up front. Although the exact dimensions of the screen remain a mystery, it’s expect to be the same as its predecessor, 4.5" (diagonally). Added to this is an "all-day battery life" being touted by Motorola, but the exact mAh of the battery was not detailed. Another aspect we can confirm is its camera setup, with a 13 MP one pulling duty on the rear, and a 5MP camera up front.

Lastly, the 3rd Gen Moto G is believed to support dual SIM operation, as well as a water resistant construction. As far as pricing and availability goes, the Moto Maker site did not disclose, but we're sure such details will emerge officially next week.