If you’ve enjoyed 2013’s intriguing Papers, Please, there might be another game up your alley that’s being released today. Called The Westport Independent, the game is as Swedish developers, Double Zero One Zero, likes to call it, a "Censorship Simulator".

If you’ve picked up on the newspaper-ish title, you’re halfway there to understanding the game, which certainly has an interesting premise. It takes place in the offices of The Westport Independent, one of the last independent newspapers in a country which has up until recently known only war. As editor it’s your job to remove and edit the content of your paper, which affects the people’s opinion of both the rebels and the Loyalist government. The problem is, with an increase of rebel activity and an ever watching government breathing down your neck, whose truth will you print? 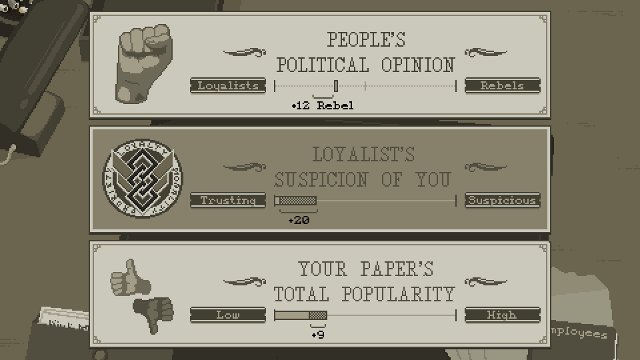 There’s not only the editing that needs to be dealt with, but also your journos, since the way you change their stories has a knock-on effect with how they interact with you and their colleagues. The stories your newspaper prints furthermore have an impact on the city, influencing the stories you in turn receive.

Both the trailers below should provide a clearer indication of what you actually need to do, so hit the play buttons below for more.

The Westport Independent is available on Steam, or for Android or iOS.