Japanese electronics company, Panasonic, is finished with waiting in the wings, as the company announced yesterday that it will be making a concerted push and re-investment into the local market.

While Panasonic – and its products - have had a low profile locally to date, this is set to change, as the company, along with a $5 million (R60 million) marketing budget, will apparently be going head-to-head with the likes of Samsung, LG, Canon and Nikon, Phillips and other market leaders in their segments. Thus, Panasonic’s executives took the stage in Emperor’s Palace to show off a comprehensive range of products, from cameras and TVs to home theatre equipment and home appliances.

Perhaps the most alluring of these were the company’s cameras, which ranged from a tough, rugged snapper (Lumix FT5GA) to a mirrorless camera, the 16 megapixel Lumix GH4, which is able to deliver 4K video. Also catching the eye was the possible Canon G1X competitor, the 18 megapixel Lumix TZ60GA, which boasts a 30x zoom, Wi-Fi connectivity and a Leica lens. 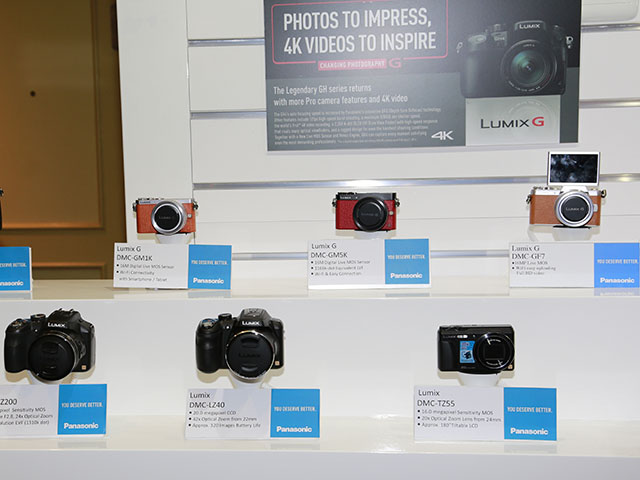 The regional head of Panasonic for India, South Asia, Middle East and Africa, Daizo Ito, stated that the corporation viewed quality as its measure of excellence.

“Attention to detail and refined Japanese craftsmanship are inherent in all Panasonic products, from easy-to-use consumer products such as our range of audio-visual systems, cameras, home appliances, to reliable and precise business solutions including air conditioning units,” he commented.

Other attributes setting Panasonic apart, he added, are its anticipation of consumer needs, dedication to enhancing quality of life, adoption of the latest environmentally friendly technologies and cutting-edge designs.

Supported by more than ten Panasonic executives who had flown to South Africa to meet with key distributors and retailers, Ito noted that the company believes in cultivating long-term relationships and partnerships based on trust and respect. To this end, the company would be making a concerted effort to secure the support of retailers.

Responding to the question of why the renewed focus on South Africa, Ito explained that the country was seen as being a promising market in its own right, with South African customers exhibiting an increasing appetite for technology-based consumer products. The company pointed out that spending on technology goods, from mobile handsets and gadgets to refrigerators, washing machines and cars, was increasing.

Dave Smith, the senior general manager of sales for the company, revealed that the company will particularly be focusing on promoting its appliances. He explained that one of the problems in the technology sector is that of price erosion, in which the price of a TV for example, is dramatically slashed a year after its launch. This is in contrast to appliances (washing machines, fridges) which tend to hold their value for longer periods.

There is a strategic element to the announcement as well, as Panasonic confirmed it was looking at South Africa to serve as a platform to reach into other African countries down the line as well, with Nigeria and Egypt apparently being next in line.

Panasonic’s announcement was welcomed for a number of reasons, amongst them was the perennial one – increased competition is invariably always good for general users, particularly as it tends to drive prices down and foster greater innovation, ensuring no manufacturers gets too comfortable for too long. That is something we can wholeheartedly support.