We’ve seen an invigorated Puma taking on the running world with their new Nitro foam tech, as featured in our standout – the Puma Deviate Nitro (review). Now it seems the sports apparel company has its sights set on the off-road, releasing the new Voyage Nitro, its first trail running shoes featuring Nitro.

Puma notes the Voyage Nitro features a two-part midsole with Nitro foam under foot for cushioning and responsiveness on the trails. The Nitro cushioning tech is infused with nitrogen through an innovative new process that makes it possible to combine three key benefits to the runner—responsiveness, cushioning, and is extremely lightweight for a more effortless run, according to Puma.

The Voyage NITRO also features the durable rubber compound Pumagrip on the outsole to enhance the traction, especially needed when running trails for multi-surface traction. The company notes it analysed the best fitting running shoes in the industry to develop an improved fit based on different usages, with the Voyage Nitro apparently fitting a variety of foot shapes.

When the new Puma Nitro range launched, the company placed emphasis on women’s running, stating that its new shoes will pay more attention to fit. For the Voyage Nitro women’s shoes, it’s created with a specific last engineered for the female foot, providing a narrowed heel, lower in-step and sculpted arch shape.

This shoe is made with OPTIFIT technology that wraps the foot for a secure fit on uneven terrain, with Puma believing the Voyage Nitro will shrug off dirt and debris and drain any water you collect along the way. As can be expected for trail running shoes, they pull the scales towards the heavier side, with a UK 8 weighing 304 grams. The heel-to-toe drop off stands at a flat 10 mm (including sock liner).

The Puma Voyage Nitro will be available on PUMA.com, from PUMA stores, Totalsports, Cape Union Mart and select retailers from September 2021, retailing for R2 799. 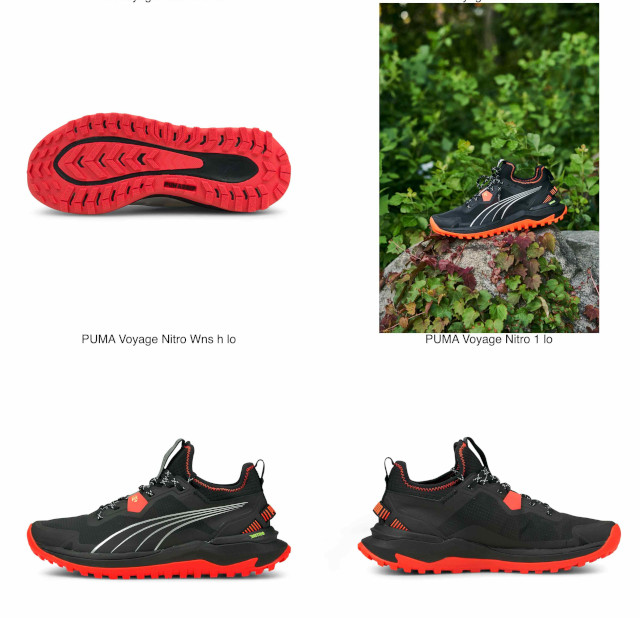