To absolutely no-one’s surprise at all, Samsung unveiled its newest pinnacle of its smartphone range (at least for now), the Galaxy S5 at Mobile World Congress 2014, currently underway in Barcelona. The smartphone is both different and similar to the S4 in a number of ways. To start with, the S5 is only a little larger than the S4, coming in at 5.1” (as compared with the 5” S4) and leaving the 5.7” range to its notetaking companion, the Galaxy Note 3 (review).

One aspect that has been borrowed from that laudable smartphone is that the S5 now similarly  sports a faux leather stitching on its back - still plastic, but made to look like leather, as on the Galaxy Note 3. The S5 also borrows some familiar features from the Galaxy S4 (review)  as well – the screen is the same Super AMOLED display, boasting a full HD (1920 x 1080) resolution. This though, is neither a surprise nor a disappointment; given the strength of the previous phone’s display, it would hardly have made sense for the company to tamper any further with what was already a winner.

While we, and no doubt, more than a few others were hoping Samsung would finally end its love affair with hard plastic and hook up instead on a permanent basis with aluminum; alas, the company has stuck by its long-time partnership with polycarbonate (hard plastic) on the S5 as well.

One area where the S5 should impress is in its specifications and thus its performance. Onboard this time is a quad-core 2.5 GHz Snapdragon 800 processor clocked at 2.5 GHz and a healthy dollop of 2 GB of memory. Apparently though, that is just one of the variants of the S5; on another, the smartphone will instead sport an octo-core Exynos processor clocked at 2.1 GHz.

It will be interesting to see how this compares side by side with the latest Galaxy Note 3 (review) which delivered spectacular performance, and thus set the bar exceedingly high for Samsung’s future devices. The question that we will be interested in answering is whether the S5 merely matches the Galaxy Note 3, or surpasses it even further.

While only 16 GB and 32 GB variants have been announced, that is hardly of a concern – the presence of a microSD card means users can expand that by up to a whopping 128 GB.

Another reassuring difference is that the S5 now boasts an even larger battery (2 800 mAh) which should translate into better battery life. Samsung is promising in the order of between ten and twelve hours of video playback, and also introduced a couple of interesting battery saving features. 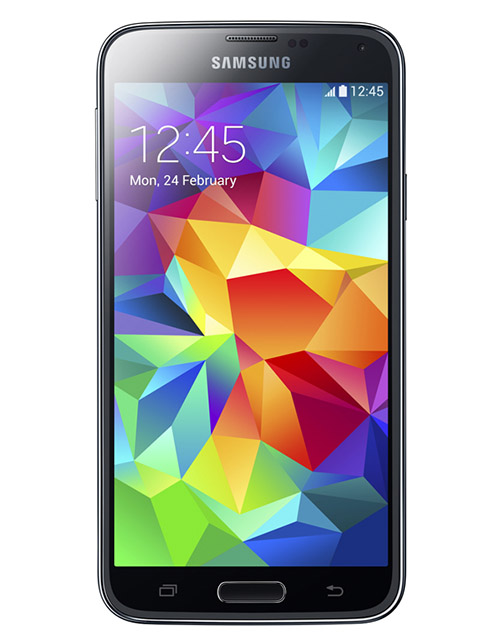 The biggest question for the S5 may be has it done enough to impress, or is it just more of the same from Samsung?

One of these takes into account that sticky situation of being stuck with a miniscule 10% battery charge left. This though, may be helped by the inclusion of some nifty new battery saving technology. Under that situation, the phone will automatically disable all but the most essential features to save battery life, and change the screen to black and white to do the same.

Whether this delivers enough power to see one through the rest of the day before having to get the phone to a power outlet though, remains to be seen under test conditions. The backfacing camera has also been given a bit of an enhancement, up to 16 megapixels from the S4’s 13 megapixel snapper, along with HDR (high dynamic range) as well.

Now for something different

None of these features though, are exactly revelatory. Leading the charge for something new is the inclusion of an integrated fingerprint reader. Primarily aimed at offering additional security, this enables users to biometrically unlock their phone, protect files and sign into select apps where security is paramount.

Also new is the inclusion of a heart rate monitor built into the phone. No doubt, this plays into the rumoured next attraction for mobile developers – health and fitness. Along with catering to fitness apps that take into account resting heart rate and the like; the S5 also boasts its own S Health 3.0 fitness tracker, which brings a pedometer and diet and exercise records to the mix.

However, the question floating around the web since the S5’s announcement has been whether Samsung’s latest is different enough to justify an upgrade, and whether it distinguishes itself as much as it could have from other premium smartphones.

TechSmart was on hand at Mobile World Congress for the unveiling. Our first impressions were that the S5 had an extremely light feel and awesome display, while the phone’s water and dust resistance should also come in handy with the S5’s fitness focus.

“With the Galaxy S5, Samsung is going back to basics to focus on delivering the capabilities that matter most to our consumers,” commented JK Shin, president and head of IT & Mobile Communications division at Samsung. “Consumers are looking for mobile tools that inspire and support them as they improve their everyday lives. The Galaxy S5 represents an iconic design with essential and useful features to focus on delivering the ultimate smartphone on the market today through people inspired innovation,” he continued.

The smartphone is slated for global release during the course of April; no doubt local pricing will be revealed closer to the time.