Samsung brought a whole lot of TV to its launch event at Melrose Arch last night. Surrounded by luxury and sports cars at the Daytona Showroom, the company lifted the lid on its 2019 line of QLED 4K and 8K models. No surprise it was the latter that stole the show, as the picture on the TVs look nothing short of spectacular. But stunning visual fidelity is just part of what the 8K sets bring to the fore.

Also onboard is a number of other features meant to make the TV the centerpiece of one’s entertainment, The first of this is Samsung’s Quantum Processor 8K, which up-scales lower resolution content to 8K while also allowing for playback of native 8K content. The processor further optimises audio and video to the specific content on the screen, and create an even more detailed sound experience by tailoring the audio settings to the specific layout of the room.

Of course the question is what about the content, and is there any point to having an 8K screen if you don’t yet have 8K content? The president and CEO of Samsung, Sung Yoon, answered this question by likening 8K to the introduction of Blu-Ray, which also took a while for the content to be produced. However, 8K content production is already gaining steam – with Netflix apparently producing 8K shows and the 2020 Olympics set to be recorded in 8K.

No mention was made about how much streaming 8K would have on your data limit if you have one, but I imagine you are going to want a very healthy cap, if one at all. 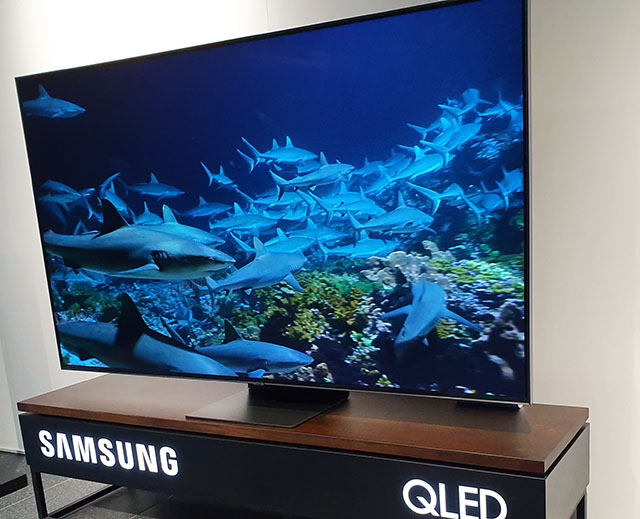 A sight for sore eyes

Cambridge Mokanyane, the chief marketing officer of Samsung South Africa, noted that 8K has four times the resolution of 4K, with 33 million pixels.

As well, the 2019 Q80 and Q90 sets sport ‘Ultra Viewing Angle’ technology, which restructures the TV’s panels so the backlight passes through the panel evenly lights the screen. Engineered to reduce glare and enhance colour, Ultra Viewing Angle provides a vibrant picture regardless of the viewing position.

With the new TVs, Real Game Enhancer, which optimises the gaming experience, features AMD Radeon Freesync variable refresh rate technology, which helps prevent tearing and stuttering, as well as Game Motion Plus, which removes motion blur and judder. Real Game Enhancer combines these technical innovations with Auto Game Mode, which minimises input lag on compatible devices. It also includes AI-based audio and video enhancements that optimise the settings to delivering cinematic sound and smooth, lifelike visuals that can remain clear even during bright and dark scenes.

In other words, the likes of God of War, and hopefully its successor, will probably look even more tantalising. And yes, when 8K games come down the line, no doubt players will be in for one visual treat after the next.

On, even when it’s off

The fourth and final feature worth mentioning is Ambient Mode, which turns the blank screen into a decorative or informational display when the TV is not in active use. While it can provide useful daily information, like the time, weather forecast, or that day’s headlines, the more alluring use to our mind is the use of it to display photos and works of art. If you’re an abstract art lover, where colour and light prevails rather than form and detail, we suspect it will be a boon as well.

Samsung also announced that between the 24th of April and 5th of May, customers will get a free soundbar when ordering one of the sets.

As for sizes, in both 4K and 8K models, these range from 55” to 98. Prices were hinted at – with the 8K Samsung Q900 coming in at around R30 000 and the range topping out at R76 000. Particular prices for each of the models were not yet detailed, but we will update as those become available.