There is no doubt that solar power has become increasingly relevant in light of the push to curb carbon emissions and to respond to climate change. But for developing nations, such as South Africa, the question arises: Is the use of renewable energy really sufficient as we endeavor to answer pressing challenges, such as lack of education and employment?

Answering that question in the affirmative is the recent launch of Dell’s Learning Labs in Diepsloot. The Learning Lab is housed in a metal container previously used to transport goods across the ocean. It now contains a dozen computer workstations, each networked to one another and to the internet. Most notably, it is self-sustained using solar power.

Education and employment for all

“I absolutely love this solution,” comments Natasha Reuben, head of transformation at Dell EMC South Africa. “It’s a fantastic way to not put pressure on a school or rural community in terms of electricity, as this solution is off the grid. More importantly, this little container has the potential to do so much. Kids can go in during the day and learn. They can code and play with new technology. In the evening the community has access to it. They can use it to find jobs and research,” she enthuses.

Each Lab is equipped to meet the varied demands and desires of a rising community according to Dell. A curriculum is designed to help students’ studies, and staff are assessed and trained to take advantage of the Lab’s services. Furthermore, the Labs are continuously evaluated and adjusted by Dell and its partners at least once a quarter, but this can be as frequent as on a weekly or even daily basis.

The Labs are also always connected, enabling Dell administrators to know if there are technical problems. Utilising solar power and bringing technology to underserved areas are not the only hallmarks of the project, also key, Reuben stressed, is community involvement.

Since launching in 2014, sixteen labs have been launched - some in Kenya and Nigeria, but the majority  across South Africa. Dell works with partners such as Change The World and Sci-Bono to find communities who want such facilities. It may seem like a given that anyone would approve of a Lab, but there is considerably more nuance to such a project. Indeed, Reuben noted, this is why many corporate social investment programmes fail: they take a “parachute approach,” the embodiment of ‘build it and they will come.’

In reality, if there is no sense of ownership from the community, the project inevitably fails. Instead of relying on the flawed determinism that technology will inevitably deliver good, asking what the community needs is crucial. Local organisations, churches and other groups are approached, but the foundation of this is the school where the Lab will be located. Reuben pointed out that if the staff are not co-opted and given the lead on a Lab, it risks becoming a white elephant. 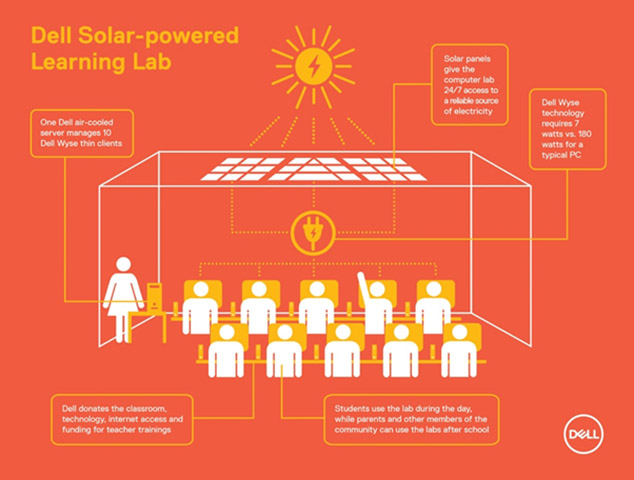 The true purpose of technology

However, when such efforts are strategic and done well, its impact can be substantial. According to the company, the initiative is part and parcel of the company’s efforts to invest in a more diverse technology workforce, with $14 million in grants and technology donations earmarked to support future generations of STEM workers. Current donations made across Dell’s 71 youth learning partners globally are expected to bring technology education to more than 1.5 million underserved youth, and impact the lives of some four million children since 2014.

Interestingly, at the launch of the Labs, Reuben made an unfamiliar assertion, namely that technology does not change the world. That is a myth, she contended, often told by those who live in the middle of a technology storm.

She continued that for those waiting at the edges for that rain to reach them, technology’s true purpose is clear -  it’s a means to an end, to create a better life. She stressed that empowering people through technology, on their terms, is the key to success.

The timing of the launch locally is interesting for another reason - it comes a week after Dell Technologies highlighted in New York just how effectively technology can be leveraged to not only create better lives, but actually save them, at its IQT Strategy day.

Perhaps the most striking aspects of the launch though, from a South African context, is that it really debunks the usual excuses as to why outlying, underprivileged areas shouldn’t be in on the digital revolution. In this case, lack of electricity infrastructure is not an impediment, nor is an extensive budget required to build a dedicated bricks and mortar building for computer sciences. It begs a more alluring question: What other pressing problems in the country could be solved with a little bit of innovation?

For more about the Learning Labs, take a look at the video below.